Review of Love on Tour by Angela Ford 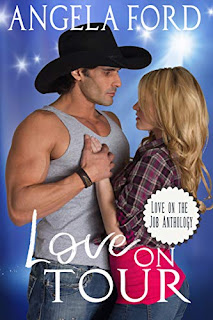 Andi Scott, Book Publicist, for a major New York publishing house knows everyone in the promotional world. Her only love in life is her career. When her brother Rick, Tour Manager, calls her in desperation; she decides to step away from book tours to take on the role as Tour Publicist for an award-winning country star, Brett Hill. Andi is responsible for all media relations and publicity related to the tour. When the show hits the road, Andi works closely with her brother, Brett, and the crew to promote each performance, hold press conferences, and schedule special appearances. A 24-hour-a-day gig that demands her to focus on promotion while looking ahead to the next city.

Brett Hill released five albums, is a Grammy winner, and has toured with stadium-filled crowds. He loves what he does and he’s doing it well. His only love in life is music. He connects with his fans through enthusiasm, appreciation, and charm. An energized entertainer that keeps you smiling and singing along with him. His good looks, athletic physique, and his country charm has given him a long list of women. Until he meets his publicist, Andi Scott. She’s different, professional, and has his back. But as the tour begins, he falls hard for the book publicist from Virginia.

Complications arise along the tour when a photo of Andi outside Brett’s hotel room is leaked and then Andi’s ex shows up out of the blue. As if she didn’t have enough to juggle and an inevitable attraction to Brett; Andi must protect the reputation she’s built and keep the tour running smoothly. She’s scared to fall in love and become a number added to Brett’s list. He assures her he can’t live without her – on or off stage. One night of escape from the madness of life on tour leaves them both to wonder if it’s really love on tour they’ve found.

I REALLY ENJOY LOVE ON TOUR BY ANGELA FORD.  IT IS A SWEET AND ROMANTIC LOVE STORY THAT LEAVES YOU WANTING MORE.  ANDI, BOOK PUBLICIST'S BROTHER RICK ASKS FOR HELP WITH HIS COUNTRY SINGER'S BRETT HILL'S TOUR, SHE DECIDES TO TAKE A BREAK FROM THE BOOK WORLD AND HELP OUT.   GOING ON TOUR WITH A COUNTRY SINGER, HER BROTHER AND CREW IS TOTALLY DIFFERENT THAN THE BOOK WORLD.  ANDI FINDS HERSELF ENJOYING HER JOB AND GETTING TO KNOW THE HOT COUNTRY SINGER, BRETT IS JUST ANOTHER BONUS.  BRETT IS SO CHARMING AND LOVES SINGING TO HIS FANS.  BRETT'S SMILE IS ENOUGH TO MAKE ANY WOMAN FAINT.  AS ANDI AND BRETT SPEND MORE AND MORE TIME TOGETHER, THE CHEMISTRY BETWEEN THEM SIZZLES THE PAGES.  THE LAST THING EITHER ONE EXPECTED WAS LOVE IN THE WORK PLACE.  IS IT REAL OR JUST A FANTASY?

LOVE ON TOUR IS A WELL WRITTEN STORY WITH WONDERFUL CHARACTERS.  I LOVE THE ROMANCE THAT DEVELOPED BETWEEN ANDI AND BRETT.  THE CHEMISTRY BETWEEN THEM IS SO HOT THAT IT STEAMED UP THE PAGES.  IT FELT SO REAL AND BELIEVABLE.  I LOVE HOW THEY MET AND I ENJOYED ANDI AND HER BROTHER'S RELATIONSHIP.  THEY WERE VERY CLOSE.  ANOTHER GREAT STORY BY THE AWESOME, ANGELA FORD.  IF YOU HAVEN'T READ ANY OF HER BOOKS, YOU DON'T KNOW WHAT YOUR MISSING.  I LOVE HER WRITING, STORIES AND CHARACTERS.  THE AUTHOR HAS YET AGAIN PROVED WHY SHE IS ONE OF MY FAVORITE AUTHORS.  THIS A MUST READ FOR YOU ROMANTIC READERS.  5 STARS

Biography
Angela resides in Nova Scotia – Canada’s Ocean Playground. Inspired by sunsets, the ocean, her family, and books! She is never without a book, whether she’s reading or writing. Angela is a bestselling and award-winning author who has been in the Amazon top fifty, Readers’ Choice Awards and ScreenCraft. She has over 50 published works in paperback, eBook, audiobook, and foreign translation. An Award of Distinction sparked the idea for her first book ‘Closure’ that hit Bestselling Action & Adventure, Women’s fiction. In between mysteries, Angela writes short contemporary romance. She loves to connect with her readers! www.angelafordauthor.com
Posted by Girl with Pen at 6:00 AM