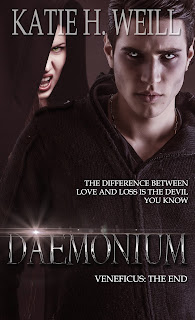 
Lucas Cale turns
18 in a few weeks—as long as he can make it through detention, groundings and
the undeniable feeling he is being watched. His parents are unreasonably
demanding, his sister is wild, and his temper isn’t winning him any friends as
he is dropped into the government-mandated class, “The History of Witches.”
They are real,
he’s been told. They are powerful, and evil—yet Lucas doesn’t care. There has
never been a witch sighting on record in their one-horse town.
But that was
another life, flooding back like a nightmare as he is driven into his past, and
bound to a future spiraling out of control.
When history is
no longer left behind, he’ll be forced to choose between the man he was and the
demon he has become—or face the howling darkness awaiting his return.

Drawn back into a
world of hidden covens and regulated magic, he may learn that the difference
between love and loss is the devil you know.
Goodreads / Amazon Claudia was aware she was sleeping as she watched her shortened brown hair, slightly kinky and sucked of healthy color, float around her face in the lack of gravity, but it didn’t stop her teeth from chattering.
Which way was up? She questioned, as she forced her limbs to move, joints crackling, popping as a thin layer of ice shed from her skin, floating away in the black that surrounded her. Which way was down? She tried to swim her arms at her sides, to maneuver her body so she could look around and was met with nothing but the void.
Shadows danced, one blacker than the next, their darkness bounding the chasm in which she was trapped, extending in every direction as far as she could see. There was no noise, not even the sound of her heartbeat now in the deafening silence, but she felt the howling hollowness, felt the isolation begin to stir panic inside her.
And her necklace? The source of her power, the midnight tourmaline that had been her comfort, her confidence, had abandoned her.
“Hello?” Claudia spoke, and no sound left her mouth. Her arms ached as she brought her palms in against her ears, pressing them in and releasing so she could feel a slight suction. More ice crackled from her skin, but she couldn’t hear it.
“Hello!” This time she felt her vocal cords strain as she screamed the word, the air leaving her lungs in an explosion of her growing dread.
And there was nothing but silence.

Katie
H. Weill is the descendant of a witch - descendant of Ann Pudeator, a wealthy
woman in her seventies who did nothing but care for others, and one of the last
women accused and executed in Salem, Massachusetts. Katie was inspired by the
hard fought findings of her Aunt to create a story that started with a sprinkle
of history and unraveled a tale from there. With her husband and her rescued
dog at her side she is enthralled by the idea of creating new stories and
worlds and looks forward to sharing them with the world. Ann Pudeator was
exonerated in 1957 by the Massachusetts General Court of all charges.

Connect with Katie and stay up to date
on all the latest news, events and releases: