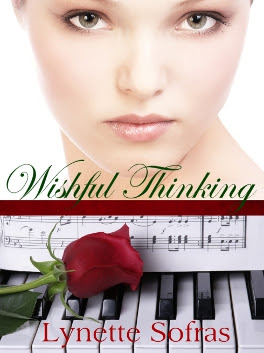 A high-speed blow-out in the fast lane of a busy motorway! Miraculously, Jess and her young son escape almost-certain death.

Then, like another miracle, Jess encounters Christian Goodchild, pop idol turned Hollywood A-lister and a man most women only ever meet in their dreams. Both are touched by the enchantment of the moment - leaving them longing for more.

But Christian is enmeshed in a relationship so damaging that Jess doubts their love can survive in the glamorous but complex world of celebrity. Could it all turn out to be just wishful thinking?

"But I can't. I haven't…" She stopped herself from uttering the clichéd words about having nothing to wear, no matter how true they were. She certainly had nothing to match up to Christian's attire and doubtless those of the rest of his guests.

"It doesn't matter to me how you look," he told her. "Just throw anything on. I want you to enjoy the fun."

But I wouldn't enjoy it looking like Cinderella in her rags, she thought, trying to suppress her irritation. Only a superstar would think what he was asking was so simple. Or not think at all. And then she felt selfish. But it was out of the question, he must realise that.

Christian blew an exaggerated sigh and shook his head, looking defeated. "I was afraid you might object, which is why I brought a bit of the party to you, just in case." He handed her the champagne and flowers. She led him into the tiny sitting room, hastily clearing away Ben's mug from the coffee table and casting nervous glances around her as she indicated for him to take a seat. He looked so out of place in her humble surroundings that she wanted to apologise, but stopped herself.

"I'll go and tuck in Ben and be back with you in a moment."

She put the flowers in the kitchen and rushed into her own bedroom next to Ben's to brush her hair before hurriedly adjusting her make up. It was a good thing she'd put some on that afternoon at least, because they'd been to a small tea party at a neighbour's flat where one of Ben's little friends lived. What a vastly different kind of party there must be at Christian's house, she thought, applying a few careful sprays of her favourite Dior perfume, a Christmas present from her father. Imagine her at such a party. If only he could have given her some notice to find something glamorous to wear and a dbabysitter for Ben, although on New Year's Eve, the likelihood of that was too slim to consider.

When she returned to the sitting room, carrying the roses now crammed into a rather smaller vase than their elegant stems deserved, Christian stood looking at a small Ansel Adams' poster on her wall. He turned towards her as she re-entered the room, thanking him for the flowers.

"I really am sorry for just turning up like this. I literally discovered where you lived an hour ago, got straight into the car and drove here. It occurred to me that if I phoned first, you might try to put me off coming. I wasn't sure if you'd want to see me."

"Not want to see you?" She shook her head in astonishment as she placed the vase on the table. She'd thought of nothing else but seeing him again, though she'd hardly dared allow herself to admit that, or to expect it to happen. And here he was now, looking too magnificent for words and leaving her feeling tongue-tied and awkward.

He moved towards her, their gazes locked together. Their lips came closer, and she felt hers begin to tremble. She breathed in his cologne or aftershave; a heady aroma of citrus with exotic spicy undertones, earthy, sexy and intoxicating. The tremor in her lips spread to her whole body and when his lips finally touched hers, she released a soft moan of longing and utter capitulation. His touch was gentle; their lips making the barest contact at first as if they themselves were hesitant and shy about getting to know each other and this fired her desire almost to fever pitch. He scattered a few exploratory little butterfly kisses around her mouth, as if begging permission to take her completely, before claiming her mouth in a deep and passionate kiss.

How long the kiss lasted, Jess neither knew nor cared. She lost herself in the ecstasy of the exquisite moment, the sheer bliss of the sensuous touch of his lips, soft yet firm against her own. I've wanted this not just since that night in the snow; this is something I've wanted forever. Her body seemed to melt in his arms, creating the sensation she might disappear altogether, and if she did, she wouldn't care. She'd lost all control over her will. She was just there, in his arms, responding to his kiss and it was the most perfectly right, the most magical experience of her whole life so far.

At length he pulled away, but in slow motion, while he continued to search deep into her eyes, his own luminous and large. "That was unfinished business. It had to be done," he whispered.