Cinderella Had It Easy By Jennifer Conner 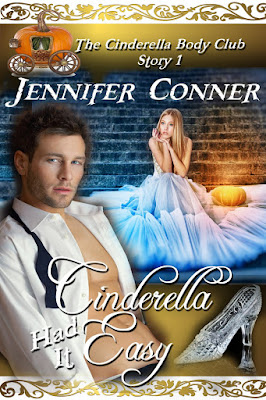 Story one from the new romance series of the timeless Cinderella story reimagined where four girlfriends make a wish on a locket. They all wish they were beautiful, and look like the girls they've always wanted to be. The belle of the ball.

Cami works in the basement of a television station which airs history documentaries. With scars on her face that she acquired in a car accident as a child, Cami finds it easier to be by herself. She gets into a heated debate with the handsome new host of the show she’ll be working on. Is Lance the knight in shining armor who can drag Cami out of her safe zone? With no carriage and no helpful mice, she has to rely on the magic from her grandmother’s locket.

Cami only has 24 hours in her Cinderella body, what will she do with it? Will she keep hiding or can she learn how to live life?

Cami wandered off toward the diorama. She was the only person in the room. Others probably toured earlier in the evening. The walls were covered with portraits of Richard the Third and information which led from one station to the next to reveal the chronological events. Many of the displays were interactive. She picked up the headphones and slipped them over her ears.

It was enjoyable to hear the historical information read back to her. It felt like when her mom used to read her a story. A hand touched her shoulder. When she turned, she found Lance behind her. She pulled off the headphones and placed them back to rest on the stand.

“Do they have all the information right?” he asked.

“Sounds good so far. I volunteered to help the museum and wrote much of the description for this exhibit. It’s right.” She winked at him.

“You work full-time and still find time to volunteer for the museum?”

“When it’s something you love, it doesn’t feel like work. I don’t have to take up my time at night. No guys beating down my door.”

“I guess I have to offer to go and pick them up. That’s the secret,” she whispered the last part.

“When I take you out on a real date.”

“We’ll see.” Cami looked down and twisted the strap of her purse. “You might feel differently tomorrow.”

“I doubt it.” Lance looked across the distance at the lobby. “It sounds like the fundraiser is shutting down. Is there anyone you want to say goodnight to?”

“No. I don’t know most of the people.” Cami ran a hand over the information engraved on the brass plate. “The big reason, I suspect, Henry Tudor didn’t engage in a more lengthy investigation was that the country had been torn apart by a thirty-year war. He needed to get the people united under Tudor reign”

When she looked over, he was watching her.

“Do you know how sexy a woman is that can randomly quote historical facts?”

“Right…” She burst out laughing. “All the women in there tonight were watching you and most of them were gorgeous. You could have gone home with any of them.”

“But, I don’t want them.” He took a step closer and tucked a strand of loose hair behind her ear. “They can’t tell me why Henry the Seventh was concerned with peace and prosperity but did nothing but encourage the ugly implications against Richard. As I said, I find history sexy.”

“Let me tell you a story, and then maybe you’ll believe me.” He took her hand and walked her around to the other side of the diorama blocking them from the view of those lingering in the lobby of the museum. “A few months ago, I dated a woman named Anna. Speaking of gorgeous. Anna was a knockout.”

Cami held up her hand. “Stop. I don’t think I want to hear this. Let me live in the fantasy for tonight.”

He grinned. “Give me a chance to finish. We spent…well, some time together. But when that was over and done with, we’d sit down to have a conversation, and I found that it was impossible. I couldn’t help but think of her as the ‘like’ girl. Her conversations consisted of, ‘like, I went to my mom’s, and like, we had lunch and like, we ate a burger and like...’” He twirled a flamboyant hand in the air. “After a few days, every time she started talking, like was the only word I could hear. I would fixate every time she said it. I wanted to gouge out my eardrums with a spoon and Brillo pad my brain. Beauty isn’t everything. Brains last longer.”

She braced her hands on the wood and sat on the rail. “Like, I could totally like understand that.”

“Don’t even start.” Lance chuckled. “When I met you in the lunchroom and you started debating with me on Richard the Third, all I could think of was how lucky I felt for taking this job. Then when you told me that we’d be working together? Even better.” He wrapped his arms around her. Her whole body tensed and then softened as she relaxed into his embrace. How did everything feel so right in his arms? So unlike her, she traced the stubble on his chin and kissed him.

The kiss started gently but then quickly heated. Lance pinned her between the wood railing and his hard body. The heat from his chest pulsed through the linen of his shirt. He gave her long drugging kisses that ignited her entire body.

Was that me that groaned or him? Cami didn’t care, she pulled him down for another round. All of this was happening so quickly, but she only had a few more hours in her Cinderella body. Why not?

The lights over them flicked off and back on and a museum guard cleared his throat. “The museum closes in five minutes.”

They broke apart. Lance rested his forehead against hers. They still breathed heavily.

“Even though this would be a fantasy of mine, we’d best not lose our jobs before we even start on the Roses. There would be some explaining to do,” she said, with her hands still laced behind his neck.

“Good idea. It would be a fantasy of mine too, but when I make love to you, I want to go slow and take all night.” His wicked grin was filled with carnal promise.

He grabbed her hand and hauled her toward the exit. “If you agree, come on, you have the car keys and I have a key to my hotel room.”