Kim Headlee lives on a farm in southwestern Virginia with her family, cats, goats, Great Pyrenees goat guards, and assorted wildlife. People and creatures come and go, but the cave and the 250-year-old house ruins—the latter having been occupied as recently as the mid-twentieth century—seem to be sticking around for a while yet.

Kim is a Seattle native and a direct descendent of twentieth-century Russian nobility. Her grandmother was a childhood friend of the doomed Grand Duchess Anastasia, and the romantic yet tragic story of how Lydia escaped Communist Russia with the aid of her American husband will most certainly one day fuel one of Kim’s novels. Another novel in the queue will involve her husband’s ancestor, the seventh-century proto-Viking king of the Swedish colony in Russia.

For the time being, however, Kim has plenty of work to do in creating her projected 8-book Arthurian series, The Dragon’s Dove Chronicles, and other novels. She has been a published novelist since 1999, beginning with the original editions of Dawnflight (Sonnet Books, Simon & Schuster, ISBN 0671020412) and Liberty (writing as Kimberly Iverson, HQN Books, Harlequin, ISBN 0373771347). 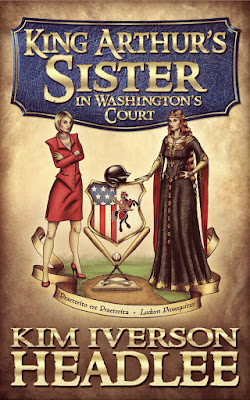 Morgan le Fay, 6th-century Queen of Gore and the only major character not killed off by Mark Twain in A Connecticut Yankee in King Arthur’s Court, vows revenge upon the Yankee Hank Morgan. She casts a spell to take her to 1879 Connecticut so she may waylay Sir Boss before he can travel back in time to destroy her world. But the spell misses by 300 miles and 200 years, landing her in the Washington, D.C., of 2079, replete with flying limousines, hovering office buildings, virtual-reality television, and sundry other technological marvels.

Whatever is a time-displaced queen of magic and minions to do? Why, rebuild her kingdom, of course—two kingdoms, in fact: as Campaign Boss for the reelection of American President Malory Beckham Hinton, and as owner of the London Knights world-champion baseball franchise.

Written as though by the old master himself, King Arthur’s Sister in Washington’s Court by Mark Twain as channeled by Kim Iverson Headlee offers laughs, love, and a candid look at American society, popular culture, politics, baseball… and the human heart.

ALL CALL ME Queen. For my unparalleled skills in leechcraft, most call me “The Wise.” No man dares call me “le Fay,” lest he die.

That is to say, my name is Morgan, so chosen by my mother, Duchess Igraine, to honor the Great Queen of the Old Religion, Mór Rigan, goddess of war. My mother never knew how prophetic her choice would prove to be.

I am the daughter of Duke Gorlois, the sister of Queen Margawse and Queen Elaine, the wife of King Uriens of Gore, and the mother of Sir Uwaine of the Table Round. Blessed good fortune made me all of these things.

By the capricious hand of ill fortune, King Arthur became my younger half brother, spawned upon my most virtuous and blameless mother by that demon in man’s raiment, Uther Pendragon.

I despised Arthur from the very hour of his birth. 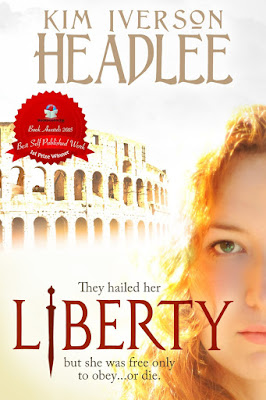 They hailed her "Liberty," but she was free only to obey—or die.

Betrayed by her father and sold as payment of a Roman tax debt to fight in Londinium's arena, gladiatrix-slave Rhyddes feels like a wild beast in a gilded cage. Celtic warrior blood flows in her veins, but Roman masters own her body. She clings to her vow that no man shall claim her soul, though Marcus Calpurnius Aquila, son of the Roman governor, makes her yearn for a love she believes impossible.

Groomed to follow in his father’s footsteps and trapped in a politically advantageous betrothal, Aquila prefers the purity of combat on the amphitheater sands to the sinister intrigues of imperial politics, and the raw power and athletic grace of the flame-haired Libertas to the adoring deference of Rome's noblewomen.

When a plot to overthrow Caesar ensnares them as pawns in the dark design, Aquila must choose between the Celtic slave who has won his heart and the empire to which they both owe allegiance. Knowing the opposite of obedience is death, the only liberty offered to any slave, Rhyddes must embrace her arena name—and the love of a man willing to sacrifice everything to forge a future with her.

Marcus Calpurnius Aquila sprawled on his belly across the cushioned and linen-draped marble massage table, his head, arms, shins, and feet jutting over the table’s padded edges. As the male slave worked eucalyptus-scented unguent into the aching muscles, Marcus could feel the tensions of combat seep away.

Too bad the man couldn’t work out the knots in Marcus’s relationship with his father, Sextus Calpurnius Agricola, governor of Britannia province.

Citing “official business” yet again, Agricola had declined to witness Marcus’s gladiatorial bout in Londinium’s amphitheater this afternoon. His opponent had fought well, causing Marcus in his scanty armor to work up a sweat that, judging by the reverberating high-pitched cheers, had all the women swooning with delight.

Never mind that Marcus, who fought under his cognomen, Aquila, the Eagle, remained a perennial favorite with the crowd. Agricola never missed an opportunity to point out that his arena exhibitions—and the resulting private liaisons with adoring female spectators—flirted with the precipice of social acceptability and could damage Marcus’s political aspirations. 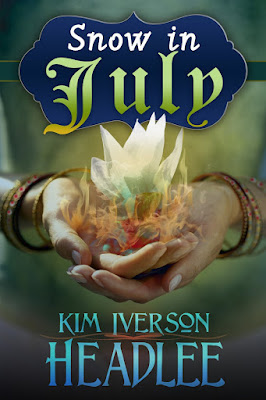 Sir Robert Alain de Bellencombre has been granted what every man wants: a rich English estate in exchange for his valiant service at the Battle of Hastings. To claim this reward, the Norman knight must wed the estate's Saxon heiress. Most men would leap at such an opportunity, but for Alain, who broke his vow to his dying mother by failing to protect his youngest brother in battle, it means facing more easily broken vows. But when rumors of rampant thievery, dangerous beasts, and sorcery plaguing a neighboring estate reach his ears, nothing will make him shirk duty to king and country when people's lives stand at risk. He assumes the guise of a squire to scout the land, its problems, and its lady.

Lady Kendra of Edgarburh has been granted what no woman wants: a forced marriage to an enemy who may be kith or kin to the man who murdered her beloved brother. Compounding her anguish is her failure to awaken the miraculous healing gift bequeathed by their late mother in time to save his life. Although with his dying breath, he made her promise to seek happiness above all, Kendra vows that she shall find neither comfort nor love in the arms of a Norman…unless it snows in July.

Alain is smitten by Lady Kendra from the first moment of their meeting; Kendra feels the forbidden allure of the handsome and courtly Norman "squire." But a growing evil overshadows everyone, invoking dark forces and ensnaring Kendra in a plot to overthrow the king Alain is oath-bound to serve. Kendra and Alain face a battle unlike any other as their honor, their love, their lives, and even their very souls lie in the balance.

Ruaud joined him, and they headed for the stables. The outlaws’ horses were gone, even the animals the dead men had ridden, leaving a morass of the imprints of boots and hooves in the dew-dampened dirt. Alain studied the swath of tracks leading toward the crossroads and released a sigh.

“Any idea where they might have gone?” Ruaud asked.

“I cannot be certain. On the road’s hard-packed surface, they can ride anywhere without fear of being followed. But I do have a reasonable guess.” Ruaud cocked his head as if inviting Alain to continue. “West. Back to Glastonbury.”

Staring westward, Ruaud let out a low whistle. “For once, I hope you are wrong. I would not like the implications if you are proven right.”

The implications that someone in Sarum knew who they were and the nature of their mission, perhaps having been warned by a traitor in the regent’s employ… Alain couldn’t agree more.

As he turned, an odd print caught his attention. He stooped to trace it.

“Did you find something?” Ruaud asked.

“The innkeeper must have a dog.” An extremely large dog, he surmised, though he couldn’t recall having seen such an animal on the premises. A howl pierced the gloom from afar. Alain stood and gazed in the direction of the eerie sound. “Or perhaps a wolf passed through.”

“And the mere sight of us convinced it to keep going, eh?” Ruaud’s grin looked wan in the moonlight.

They warily resumed their course toward the stables and discovered one of the outlaws inside, lying facedown in a puddle of blood. Alain kicked him in the side. The man didn’t move. With his foot he righted the body.

Ecgfrith. Eyes bulging, his throat bore wide, jagged slashes as if he’d been cut with a dull blade.

Or a predator’s teeth.