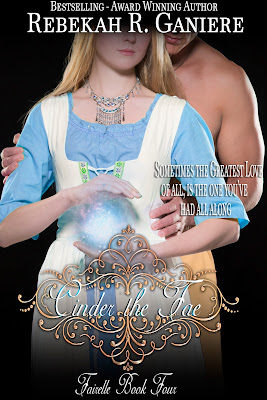 Cinder has spent her entire adult life taking care of her stepmother Lady Sabine and her half sister Olivia by earning a living as a healer and herbalist in Ville Defee. Using her magick she has become a respected member of the fae working class. Her only refuge from the hard work and berating from her stepmother being her time with the man she's been in love with since she was twelve years old. The Prince and heir to the throne, Rome.

Prince Rome isn't ready to settle down. He prefers to spend his days in the company of his friends Stil, the human mage, and Cinder. But when Rome's father announces a magickal contest to all pure-blooded females in the kingdom Rome is less than enthused. Especially since he is the prize and he's already in love with someone else. Cinder.

Cinder's birth and the mother that ultimately left her behind have always been shrouded in mystery and she has no way to prove her bloodlines and enter the contest. Until a Fairy Grandmother and Dax show up to help.

Help may have come too late though. With the evil plaguing Fairelle now having its sights on Ville DeFee, will Cinder be able to save Rome and the kingdom she loves? Or will the evil do away with her for good?

He raised his hand to stroke her cheek and she shied away.

"What are you doing?" Her voice came out as a shallow whisper.

He ran his knuckled down her face to her neck. Then he leaned in and sniffed her hair. Her breasts heaved against her restrictive bodice as she sucked in a ragged breath making him stiffen in his breeches.

"You… you mistake me for someone else, sir. Maybe you've had too much to drink again."

"Cinder." His voice came out more commanding. He kissed the pointed apex of her ear and then moved to lock eyes with her. "Take off the magick so I can see you."

Rome slipped his hands around her waist and pulled her close. She stiffened but didn't protest. He leaned in and brushed his lips over her cheek. "Cinder, show me."

"I…" Her breath caught as he licked down the side of her neck to her exposed collarbone.

His body responded to the salty taste of her skin on his tongue. He kissed over the hollow of her throat. "Show me."

She tangled her fingers in his hair, making his arousal spike. She pulled his head up and went to kiss him, but he pulled away.

Her hooded bright azure eyes were pools of desire.

"Let me see your face," he said again.

She looked conflicted for a moment and then the air around her shimmered and the image of Lady Rowena fell away.

"Rome." His name died on her lips as he crushed his mouth down on hers. Her tongue plunged deep into his mouth and he grabbed onto her. She was his. His Cinder. The one he's always wanted.