The Thin Person Inside by Rochelle Weber

The Thin Person Inside By Rochelle Weber 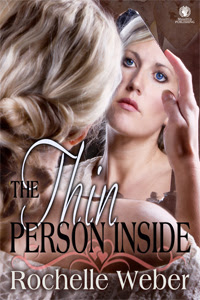 Kristen Jensen, a Navy veteran, is at the end of her rope. She weighs almost three hundred pounds, and she’s becoming a cripple. Desperate for help, she asks her VA therapist if she can go into treatment with the addicts and the alcoholics. In treatment, Kristen meets Sean Wesley. She melts when she sees his black hair, blue eyes and perfect body, and assumes the only reason he’s speaking to her is that she’s the only other person in the room. She has no clue, at first, who he really is, or what a rock star could ever see in her.

Sean thinks it’s tragic that a pretty girl is trapped inside such a huge body, and when she shares her story, he’s impressed by her openness and honesty. She’s the bravest person he’s ever met, sitting with her fruit and salad surrounded by people eating the day-old pastry donated by the local bakery. He finds himself drawn to her, but she’s had decades to build her layers of defense.

Sean Wesley went into the snack room to help himself to coffee and a roll. He’d probably gain weight while he was here without his personal trainer and weight room. He’d been a fat kid—always the last to be chosen for games, and stuck in right field when he did play. He’d been saved from a life of obesity by a growth spurt in his late teens, a judge who gave him a choice between jail and the Marines, and switching addictions from food to booze and then cocaine.

By rights, Sean shouldn’t be at a VA facility. Celebrities like him usually got sober at places like the Betty Ford clinic or Hazelden. Actually, he’d come from Betty Ford, but he’d still felt shaky so his manager, Don Nelson, had done his homework. Danville, Illinois, was in the middle of nowhere. The program was different, based on Rational Emotive Therapy, and Sean was a veteran. While he made too much money to be treated at the VA, there’s money and then there’s money. Sean had money—the kind that opens doors and breaks down barriers. The kind that makes even the Federal Government say, “We’ll see what we can do,” and then do it.

So here he was in the middle of a cornfield in bum-fuck Illinois at a shabby old VA hospital. An enormously obese woman came into the snack room interrupting his reverie, and Sean thought, That could’ve been me. What a shame—she’s so pretty.”

Kristen noticed the table of goodies and the drop-dead-gorgeous man perusing them in the break room when she went in there to put her lunch in the refrigerator.

“Want one? I heard they send ’em over every morning. I guess they’re yesterday’s leftovers.”

That’s right. Offer sweets to the fat lady. She managed a tight grimace. “Thanks, but I’m here because I’m a food addict.” She held up her orange.

“I’m Sean.” He prob’ly wouldn’t give a fat chick like me a second look anywhere else. Still, what is it about men with black hair and blue eyes that makes me go all mushy?

“I’ve heard of food addicts, but what makes ya call yourself that?”

“When my kids were little, I left them without a babysitter while I went to the store and wrote a rubber check for ice cream and M&Ms. I’d say I’ve been about as desperate for my fix as any addict or alcoholic.”

“Wow! Yeah, I guess so.” He held the door for her as they exited and then followed her into the Day Room.