The Cinderella Princess by Melissa McClone

The Cinderella Princess By Melissa McClone 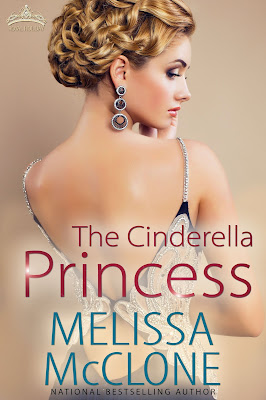 Thanks to a philandering father, ad exec Emily Rodgers knows happily ever after doesn’t exist. Relying on a man only leads to heartache. She takes care of herself, and work defines her life. But Emily soon finds herself in the hands of a real-life prince who defines the words charming and sexy. Not to mention reckless. If Prince Lucas doesn’t find a royal bride, Emily’s dream of being named a partner at the advertising firm will die.

Luc’s fun-loving ways have made him a magnet for scandal. His father gives Luc an ultimatum—find a wife on a reality TV show or be disowned. Rules require him to marry nobility, but after he meets the uptight American sent to find him find a princess bride, his search for Cinderella might be over. Too bad Emily wants nothing to do with him. Perhaps he can show her that fairytale endings can happen in real life…

“I only speak English, Your Highness,” an unfamiliar feminine voice said.

“Turn off the damn light,” Luc repeated in English.

Each word hammered at his foggy, needs-more-sleep brain. He needed rest, not conversation. Darkness, not light.

“The paparazzi are downstairs,” she continued.

Damn. They’d found him. But he’d escaped the hoard with cameras before. This time would be no different.

“I’ll sleep for another hour or so, then I can leave through a service entrance.”

He’d partied late into the night in the hotel’s VIP lounge. He didn’t remember bringing a woman back to his hotel room, or if this was even his room. But why else would she be with him?

He rolled over and buried his face into a pillow. The darkness was a welcome relief. Now to return to sleep…

“You need to wake up.” The woman spoke with a sense of urgency. She’d dropped the sir, a breach of etiquette since he hadn’t given her permission. Unless he’d done so last night. “I can’t do this without you.”

She meant sex. He must be on familiar terms with her. A smile tugged at his lips. Waking up might not be so bad. He’d fall asleep faster after they’d finished.

He turned his head toward the sound of her voice. Blinked open his eyes. Cringed at the chainsaw slicing his brain in half. Squeezed his eyelids together.

Bloody hell, how much had he drunk?

She sounded annoyed, perhaps angry. Luc must have fallen asleep last night. Disappointed her. Steeling himself for the onslaught of pain, he opened his eyes. Somehow he managed not to cringe or moan.

A blurry, unrecognizable figure dressed in black stood next to the bed. He blinked, until his vision sharpened. Straight, blonde hair fell to her shoulders in a stylish, practical cut. Attractive, possibly pretty if she stopped frowning and smiled.

“I did not mean to ignore you by sleeping the day away.” He ignored the woodpecker chipping at his brain. “Get undressed, come back to bed and I shall make it up to you. Ten-fold.”

Sharp green eyes—the color of the emeralds in his mother’s tiara—collided with his gaze. “The royal scepter appears to be in working order in spite of the amount of alcohol you drank.”

Royal scepter? He glanced down. A white sheet covered his naked body, but didn’t hide the fact that he was hard. Damn.

She wasn’t acting embarrassed so he wouldn’t, either.

“Not any alcohol. Champagne. The drink of royalty. And lovers,” Luc added for effect. “I can order a bottle of Bollinger if you’d like. Unless you’d prefer something else. Your wish is my command.”

The woman looked at him like he was a criminal, guilty of whatever crime she believed he’d committed. “I'm not a royal groupie.”

“Never thought you were.” A woman who wanted to seduce or be seduced by a prince would never button her shirt to her neck. This one was dressed for a business meeting or a funeral service. “Who are you?”

He didn’t know the name, but he’d heard names, hundreds of names, thousands of names. Ones he rarely remembered. Why should he care what she was called unless she planned on undressing and getting into his bed?

“I just arrived,” she continued. “I was sent her to help you. Not have sex with you.”

That explained her outfit and her tone. Not to mention her presence in his room. “Are you alone?”

“My assistant is getting you a glass of water.”

He tried to ignore the lightning bolt pain in his head. “Who sent you?”

Peabody-Franks was the US advertising firm associated with the reality TV show’s production company, but his father could still be the puppet master behind this farce of finding him a princess bride.

A noise sounded in the bathroom. Something clattered against the floor. Water ran. Must be the assistant.

Luc wanted to get up, move, but he didn’t see any clothing nearby. Had the hotel management put him to bed last night? “Tell me how you plan to help me.”

“First we go back to Italy to film.” A smile still hadn’t cracked her tight lips. “I brought a list of additional bride candidates since the others haven’t…worked out.”

“Really?” She motioned to him lying in bed. “Running away and overindulging in champagne isn’t helping. Princesses are turning down first dates with you. We need one that will at least go out with you once if we’re ever going to find a woman to accept your marriage proposal.”

Each word slapped his face. The sting, however, was nothing new. “If you’re trying to make me feel worse, you’re succeeding.”

“That wasn’t my intention.” Her voice softened slightly. Her expression didn’t. “But sugarcoating your situation isn’t going to find you a bride.”

“I appreciate your honesty.” Few told him the truth. Others only repeated what his father wanted said.

Birth order had determined Luc’s fate long before he was born. Being the youngest child of the king meant no one had expectations he’d amount to much. Unlike his six older siblings, he’d had few rules to follow growing up. Spoiled, yes. Indulged, all the time, especially by his mother. That was why he hadn’t thought his parents would pressure him to marry like the others.

“I do need to find a wife,” Luc admitted. “But I don’t understand how you’re supposed to help me unless you know of a princess living in a tower with no electricity or a noblewoman who’s run out of other marriage options.”

Interested in helping with the release tour for the Cinderella Treasure Trove tour (January 1-7, 2015)