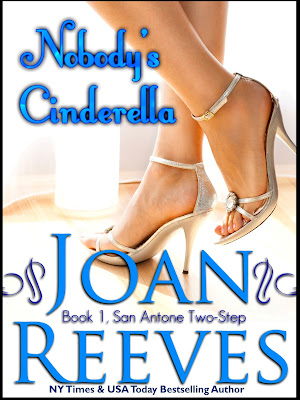 Review for this sexy romantic comedy: "I love Ms. Reeves' heroines. There is a little bit of them in all of us and that endears them to us even more. Just enough conflict, steam, misunderstandings, and humor."

Darcy Benton is the oldest cliche in the world—a woman in love with her boss. Other than that, she's no-nonsense, practical, mature, and sober. She's just the kind of woman Chase Whitaker wants as head of accounting for his company. She's definitely not the kind of woman he wants in his bed.

Enter Darcy's meddling, matchmaking best friend who has a plan to transform Darcy into a hottie designed to attract Chase's interest. All it takes? A couple of little lies. And a wish on a Christmas star. Darcy should have heeded that old advice: be careful what you wish for.

Equal parts romantic humor and romance and sex, Nobody's Cinderella is Book 1 of San Antone Two-Step. Previously print published as Love Will Find A Way, this ebook edition is expanded, updated, and contains a Linked Table of Contents and these Bonus Features:

Darcy Benton wondered if she needed to check into a hospital. Her nervous system seemed to have shorted out, producing feet that felt like blocks of ice and hands that perspired as if it were July rather than December. Her heart raced faster than a quarter horse, and her face felt as warm as a passive solar collector at the end of a hot Texas day.

Releasing her white-knuckled grip on the strap of her new black leather handbag, Darcy opened it and fished out one of the tissues she'd stashed inside. Hoping that the man who'd created this shock to her system was still engrossed in reading her resume, she furtively wiped her palms. For good measure, she blotted her damp forehead.

Her eyes strayed to the man on the power side of the. Chase Whitaker was the owner of Sunbelt Oil Producers, one of the many small independent energy companies in San Antonio.

Feeling hot and cold by turns, Darcy examined his features as intently as he studied her resume. His face easily rivaled any male heart throb on the silver screen. To characterize his dark blue eyes as bedroom eyes was an old cliché, but it was certainly true. Bedroom eyes. The phrase made Darcy tingle. She felt a blush begin beneath her prim white blouse and creep upwards. This would never do. She blotted her forehead again, surprised at how damp the tissue felt.

Frowning, she looked at the tissue. Her eyes widened. Blue ink practically dripped from the sodden wad. Horrified, she stared dumbly at her ink-stained finger tips and ink-rimmed nails. She looked at the table next to her, hoping to find a box of tissues. No such luck. Not knowing what else to do, she wiped her palms up and down the sides of her navy skirt then she looked at her hands again. The mottling had been replaced by wide smeary streaks. Suppressing a moan, she closed her hands into tight fists.

Why had this happened when she wanted so desperately to make an impression on Chase Whitaker? And not just because she wanted him to hire her. The man stirred something inside her that she'd never felt in all her twenty-three years. Just looking at him made her quiver.

That brought her up short. Get a grip, she scolded herself. You're here for a job--not a romantic entanglement. As if she would know how to have a romantic entanglement. A sigh escaped her. Chase Whittaker glanced up, his dark blue eyes sharp and penetrating. He frowned. Surely, he couldn't know what she'd been thinking? As she watched, he slowly wiped his hand across his forehead. She shifted restlessly in the chair and uncrossed her legs, knocking over her briefcase. Then she realized that he seemed to look, not at her eyes, but about an inch above them. His irresistible mouth twitched as if a smile struggled to break free of restraint. He stood. Darcy's mouth went dry as her gaze climbed his tall, broad-shouldered frame. He reached into his back pocket and pulled out a snowy white square of linen, walked around the desk, and offered it to her. "This should help."

He touched his forehead again, making a wiping motion. Horrified understanding flooded her. Quickly, she swiped the handkerchief across her forehead and wasn't surprised to see it come away streaked in blue. She returned his handkerchief with a mumbled thank you. Chase laid it on his desk top and remained standing, towering over her.

Each time she looked at him, she felt so peculiar, like the time her three brothers had dared her to climb the giant pine tree in the back yard, and she'd fallen, knocking the breath out of her.

Belatedly, she realized he was speaking. She caught the end of his sentence. "--give you a chance. We'd wanted someone with experience, but we're willing to take you on, though we try not to hire straight out of college. However, your class standing was excellent, and you seem like a mature, sober young woman."

His eyes swept her up and down, from the tight knot of hair forced into submission by half a tube of gel to the black, square-framed glasses. Those sexy eyes quickly took in the severe navy suit, pristine white blouse, floppy navy bow tie, and sensible, low-heeled shoes.

Chase cleared his throat. "And you are obviously sensible and practical."

Why didn't he just say she was so undesirable that no man would want her?

Just once, why couldn't she be seen as incredibly sexy and completely irresistible? Why couldn't he be as attracted to her as she was to him?

When he offered her the accounting position for which she had applied, Darcy managed to thank him despite the disquieting emotions that raged within.

Darcy shook his hand. His touch was like flame to dry tinder. She throbbed in places she hadn't suspected could throb. She managed a few strangled words even as a horrible suspicion began to form in her mind. She rejected the idea. It was unthinkable!

Chase led her to the door, and, somehow, she found her way back to her little blue car in the parking lot. She was so befuddled by what had happened that she nearly knocked down an elderly white-haired man, bundled up in a red ski parka trimmed in white faux fur. She mumbled an apology, not even noticing the white-bearded man looked a lot like Santa Claus.

In her car, huddled on the cold blue vinyl seat, Darcy bemoaned life's cruel sense of humor. "What am I going to do?"

Working near Chase Whitaker, who looked at her as if she were another piece of office furniture he'd acquired, was going to be impossible.

Crazy as it seemed, she had fallen in love at first sight with her handsome new boss.