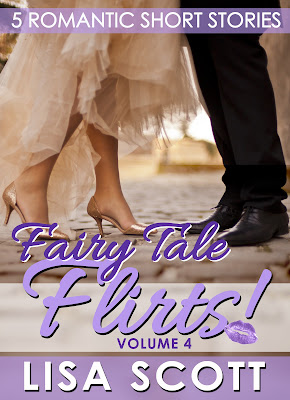 Five modern takes on classic fairy tales, and the only magic is the real-life kind. Each sweet, funny, romantic short story is 10,000-13,000 words in length. The stories can be read separately, but are linked together in the collection, and wrap up in the perfect happily ever after. Stories include:

Cindi wants a perfect match—of designer shoes, that is. When her stepmother gets tickets to the Jiminy Shoes trunk sale, it looks like her dreams are coming true. Until her stepmother refuses to bring her along. With a little luck, Cindi finds herself at the sale with the shoes of her dreams, and a handsome man to boot. But when she dashes off with one of the pricey shoes by mistake, her life changes forever.

When Rose brings her Grandmother leftover goodies from her floundering health-food bakery, she realizes she has bigger problems than Grandma’s daily fiber intake—a hot, young man is prowling around her rich Granny’s apartment. Jack Wolff seems to be preying on elderly women, but despite Rose’s protests, Granny’s not willing to give him up. And the nerve of him, Jack’s hitting on Rose, too. Can Rose save her business and her Grandma’s heart before it’s too late?

Belle’s father is sidelined by a stroke, and she’s determined to save his job as a master carpenter for the mysterious Prince Maxim. Despite her training, completing work on the Prince’s library is harder than she imagined, with the elusive prince watching her every move from the shadows. Belle’s intrigued by the intelligent, kind man who won’t let himself be seen. Is Belle the one to help him move beyond his painful past?

“Snow” 11,000 words
Shawna White wants nothing more than to land a role in a musical, but she’s running out of cash while she chases her dream. Her stepmother, Veronica Midas, suggests she take a nanny job for the rich man she’s trying to land, and Shawna finds herself in charge of seven kids. But Veronica didn’t realize Shawna would be living there, enchanting Jeremy and his children. Now Veronica will do whatever it takes to win her man.

Goldie Lockston isn’t exactly homeless; she’s just a struggling artist who crashes with friends. When her pal asks her to take over vacation dog-sitting duties for a wealthy client in Grimm Towers, Goldie decides it wouldn’t hurt to move in for the week. But she wasn’t counting on being discovered when Blake Behr comes home early. Or posing as his girlfriend. Or having feelings for this grumpy, wealthy lawyer who’s unlike her in every way.

Cindi Midas could still smell bleach and latex on her hands as she rode the elevator to her apartment. Coming home to posh Grimm Towers from her early morning cleaning job at the Castle Hotel was always embarrassing. Most people probably assumed she was the hired help as she rode the ornate elevator to the 55th floor where she lived with her stepmother. But since she didn’t pay Cindi for cleaning their apartment, technically, she wasn’t the hired help; she was the free-room-and-board help. Luckily, Cindi was a horrible cook or her stepmother would probably have her doing that, too.

It was just before noon and she let herself in the door, desperate for a shower and a change of clothes. Once she got her party planning business off the ground, she’d burn her pale pink polyester uniform and move out. She kicked off her shoes and wandered into the kitchen.

Her stepmother and stepsister sat at the table, the chandelier twinkling overhead. “Sorry, Cindi. You missed breakfast,” her stepsister, Gloria, said, shoving a croissant in her mouth.

“I ate when I got up at four this morning.” She opened the fridge and grabbed a yogurt. “This is lunch.”

Her stepmother, Hildy, splayed three golden tickets in her hand at the table. “Forget food, look what Mother got! I’ve been waiting until you got home, Cindi.”

Cindi dropped her spoon. “Impossible,” she whispered, while Gloria clapped and rushed over to hug her mother.

Once the shock wore off, Cindi practically squealed. “I can’t believe we’re going to the Jiminy Shoe trunk sale today!” Maybe wishes really do come true, she thought, fully aware it was a shallow-as-a-puddle wish, but damn it, she was meant to live in designer wear. Her christening gown had been couture from the looks of the pictures in her old photo album. But that was then. Long before Hildy wriggled her way into her father’s life.

However, Cindi could find some forgiveness in her heart with one of those tickets. The Jiminy Shoe trunk sale was the most exclusive sale in New Royalton and she’d never been to it. Sure, she’d dreamed of going, making lists in her head of all the shoes she’d buy if she won the lottery; or if her father had set up a trust fund for her instead of leaving it all to her stepmother.

Oh, she had real, responsible dreams, too: a successful party planning business, moving out, and finding love someday. But her shallow, greedy dreams glittered with the latest shoes and clothes and cosmetics. A pair of Jiminy Shoes was at the top of her list. Every self-respecting twenty-something-fashionista-wanna-be deserved a pair. And for a moment, while wearing those shoes, maybe she could imagine the life she would have led if her parents hadn’t died. Surely, they would have bought her Jiminies.

Gloria had given her a hand-me-down pair that didn’t fit her. Cindi kept them on a shelf in her bedroom because she enjoyed looking at them, and occasionally stroking the luscious, buttery leather. Finally, she’d have a pair of her own. Luckily, she had a few hundred dollars saved. She practically purred like a cat licking its chops before devouring a plate of tuna.

Her stepmother blinked at her. “Oh, no. I’m sorry, Cindi. You misunderstood. I’m not bringing you.”