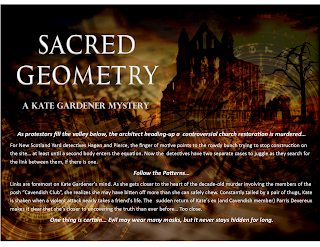 
As protesters fill the valley below, the architect heading-up a controversial church restoration is murdered…

For New Scotland Yard detectives Hagen and Pierce, the finger of motive points to the rowdy bunch trying to stop construction on the site… at least until a second body enters the equation. Now the detectives have two separate cases to juggle as they search for the link between them, if there is one.

Links are foremost on Kate Gardener’s mind. As she gets closer to the heart of the decade-old murder involving the members of the posh “Cavendish Club”, she realizes she may have bitten off more than she can safely chew. Constantly tailed by a pair of thugs, Kate is shaken when a violent attack nearly takes a friend’s life. The sudden return of Kate’s ex, and Cavendish member, Parris Devereux makes it clear that she’s closer to uncovering the truth than ever before… Too close.

One thing is certain… Evil may wear many masks, but it never stays hidden for long.