Review The Hotter They Come (Romancing the Seas) by Roxanne D. Howard 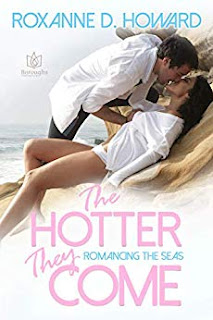 HAPPINESS HAS A PRICE

Captain Jack Spencer owns and runs a whale watching company, Ahoy, Matey. When his business takes off, a jealous rival wants him and his company gone. Jack has no idea the delectable Piper Goldhirsch is tasked with scuttling everything he's worked for - he's too caught up in their magnetic attraction and her web of lies.

​Piper Goldhirsch, head reporter for the tabloid TV show Business Buster, is all work and no play. When she and the all too tempting Jack Spencer have a one-night stand that turns out to be the greatest sex of her life, she is haunted by the powerful magic between them. Sent undercover to expose his whale watching business, she is torn between her assignment and the first man she has ever wanted. With her happiness on the line, Piper has only one choice.

THE HOTTER THEY COME IS A VERY HOT AND ROMANTIC READ.  I ENJOYED THE WELL WRITTEN STORY LINE AND THE CHARACTERS.  PIPER WORKS FOR A TABLOID TV SHOW WHO WANTS HER TO INVESTIGATE CAPTAIN JACK SPENCER AND HIS BUSINESS.  DURING HER INVESTIGATION, SHE LEARNS SHE MEANT JACK AT A PARTY WHERE THEY HAD SOME HOT AND UNBELIEVABLE SEX.  SINCE THE PARTY, NEITHER PIPER AND CAPITAL JACK COULD FORGET THE OTHER.  CAPTAIN JACK AND PIPER ARE SO HOT TOGETHER.  THEIR CHEMISTRY IS SO UNDENIABLE AND THEY STEAMED UP THE PAGES.  I ENJOYED ALL THE ROMANTIC SCENES BETWEEN THEM AND THE DEVELOPING RELATIONSHIP WHAT HAPPENS WHEN CAPTAIN JACK LEARNS THAT PIPER WAS INVESTIGATING HIM AND HIS BUSINESS?  WILL IT BE THE END OF THEIR RELATIONSHIP?

I REALLY ENJOYED THIS SWEET ROMANTIC LOVE STORY.  PIPER AND CAPTAIN JACK ARE MEANT TO BE TOGETHER.  BOTH ARE REALLY GREAT CHARACTERS WITH WONDERFUL PERSONALITIES.  I LOVE PIPER.  PIPER IS SUCH AN HONEST PERSON AND ALWAYS REPORTS THE TRUTH ABOUT HER INVESTIGATIONS.  SHE IS TESTED WHEN HER COMPANY REPORTS THE UNTRUTH.  I LOVE HOW SHE STOOD UP FOR HERSELF AND THE TRUTH.  SHE WAS A BETTER PERSON FOR IT.  JACK IS SUCH A SWEET AND CHARMING MAN WHO LOVES HIS BUSINESS AND WHO IS FALLING FOR PIPER.

IF YOU ARE LOOKING FOR SWEET ROMANTIC LOVE STORY THAT WILL LEAVE YOU WANTING MORE, YOU SHOULD READ THE HOTTER THEY COME.  ANOTHER EXCELLENT WELL WRITTEN STORY BY ROXANNE HOWARD. 4 STARS


About Roxanne D. Howard
Roxanne D. Howard writes sizzling erotic romance with Boroughs Publishing Group and The Wild Rose Press. She is a U.S. Army veteran, and a Columbia College alumni. She loves to read poetry, classical literature, and Stephen King. Also, she is an avid Star Wars fan, musical theater nut, and marine biology geek. Roxanne resides in the western U.S., and when she's not writing, she enjoys spending quality time with her husband, children, and furry companions. Roxanne loves to hear from her readers, and encourages you to contact her via her website and social media.
Posted by Girl with Pen at 6:00 AM