Chosen by the Valkyries (The Last Timekeepers and the Dark Secret) 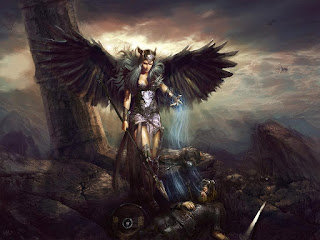 Chosen by the Valkyries… (The Last Timekeepers and the Dark Secret)

If you are ever lucky enough (or unlucky, depending on how you look at it) to be chosen by the Valkyries, it says a lot about your character and the warrior within you. In Book 2 of The Last Timekeepers tween and teen time travel series, The Last Timekeepers and the Dark Secret, an eccentric baron named Baron von Roth teaches Jordan and Amanda about the significance of the Valkyries, runes, and the most important and granddaddy of all Nordic gods, Odin.

Valkyries were female figures, closely associated with Odin, whose function it was to select those slain in battle for Valhall (a.k.a. Valhalla). The name Valkyries literally means ‘choosers of the slain’, and Valhall means ‘hall of the slain’. These slain warriors were gathered for Odin’s ghostly army, fed boar’s flesh (yum), and allowed to drink ale before they trained to hone their skills for the final battle at Ragnarok (the end of the old world). After the slain warriors are chosen, it was the Valkyries job to keep the warriors’ horned goblets filled to the brim with booze. In other words, besides being grim reapers, these ladies were also glorified waitresses.

Odin is in a class all by himself. His name means ‘frenzy’, and he was also known as the god of magic and wisdom. Odin was often portrayed as a grey-bearded old man with one eye, his face hidden by a hood or a broad-brimmed hat, because he had cast an eye into Mirmir’s well in return for a drink of its ‘immense wisdom’. He gained insight another way by hanging himself (sacrificing himself to himself) from a mighty wind-swept ash tree named Yggdrasil. Odin survived in this state for no less than nine days and nights. At the end of the ninth night, he at last perceived shapes in the depths: the runes! His sacrifice had been accepted and the runes (which mean both ‘letter’ and ‘secret’ or ‘mystery’) were shown to him, revealing to Odin not only their forms, but also the secrets that lie within them. Having fixed this knowledge in his formidable memory, Odin ended his ordeal with a scream of exultation. Whew, that’s a lot to endure for an ancient alphabet system!