Review of Something Wicked A Collection of Haunting Tales 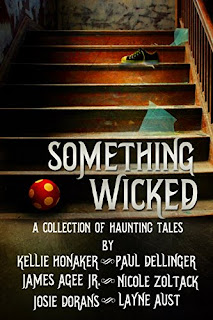 Aliens, monsters, zombies, and more, abound in this collection. A perfect read for those who love a good scare!

Breeding Season - Josie Dorans
Lock Ridge has its secrets just like all small towns. Dark secrets like what happened to Ed Anderson on March 14th in the maintenance room down at the lock. Everyone makes sure to keep quiet and look away when one of those secrets tries to skitter into the light. But turning a blind eye isn't the solution when something unseen and barely believed takes control. As a nurse, Anne Woods knows that. What she doesn't know is if she'll be able to stop an infection unlike anything in the medical journals before it pulls her family and everyone else in the town down to the river where death awaits.

My Ragnorak - James Agee Jr.
In a society that clings to their viking heritage, the position of soothsayer is revered by all. However for Arne, life as the soothsayer's apprentice is harsh and trying. Faced with two horrific decisions, one must be made. Will he brave Ragnarok or face a personal Ragnarok of his own?

It Came From The Fifties - Paul Dellinger
Young Matthew grew up loving sci-fi comics and movies, even before it was fashionable. But when he grew up, those very tales led him to a terrifying revelation.

The Steel Heart - Layne Aust
Emilio has been driven to madness since the death of his love, Natalia. Stuck in his shop, the heartbroken man tries to recreate the beauty with steel and nails. But the blacksmith is awarded a second chance by a wayward witch who makes him a deal—one that could either reunite the lovers or keep them apart forever.

A Taste for Brains - Nicole Zoltack
All Dr. Eva Jonstone wants is to appreciate life. She’s dating another doctor and mostly enjoys her fulfilling but stressful job. But then her boyfriend, Leonard Jakox, fancies himself smart enough to cure gangrene. Unfortunately, he gives Eva gangrene and then tests his cure while she’s sleeping. Even worse, she then turns into a zombie. As Leo struggles to find a real cure, Eva struggles to maintain her humanity.

The Water Doesn’t Hurt - Kellie Honaker
Bindi Birmingham needed an escape. What better place than in a tiny cabin in a town called Vein River? All is peaceful until an old man warns her of a ghost haunting the covered bridge in front of her property. She scoffs at the idea until she sees the specter herself. Will she manage to break the curse or will she join countless others in the murky depths

SOMETHING WICKED IS A COLLECTION OF SIX SCARY TALES TOLD BY SIX AUTHORS JUST IN TIME FOR HALLOWEEN.  EACH STORY IS UNIQUE IN ITS OWN WAY AND WILL LEAVE YOU TERRIFIED.  YOU WILL BE AFRAID AND BE WATCHING YOUR BACK.  AFTER READING EACH TALE, YOU WILL WANT TO KEEP YOUR LIGHTS ON ALL NIGHT.

IF YOU LOVE SCARY STORIES OR MOVIES, THIS BOX SET IS FOR YOU.  4 STARS