Cover Reveal All for Him by E.M. Denning

ALL FOR HIM
by E.M. Denning

Ashley Hartman has always been child free by choice. It’s a decision her first husband knew about when they met and it’s the same decision that tore them apart years later. Now a thirty-six-year-old divorcee with an overly opinionated best friend and a career she no longer wants, Ashley is trying to move on with her life.

Liam White swaggers his way up her driveway and into her life a year after her swift and brutal divorce. Though he’s twelve years younger than her, their friendship is instantaneous and it’s not long before she hires him to finish the renovations on her house.

Their relationship quickly explodes into something neither of them expected. As Ashley starts to let herself believe she could have a second chance at happiness, everything goes sideways.

Ashley slowed her pace and resigned herself to the fact that this guy wasn’t going to be so easy to shake.

“Only new to the neighborhood. I used to live across town.”

“Ah, where all the upper-crust hang out.”

“Yeah, the upper-crust and their mooching friends who live in their guest houses for a year.” Ashley shut her eyes and shook her head. She hadn’t meant to say so much to this guy, but she’d been drinking all afternoon and the beer had loosened her tongue.

“So, you’re not just slumming, then?” Liam winked at her, she assumed this meant he was joking. “Seriously though, that carpet had to be three times your weight. Are you sure you don’t need more help?”

“You know, walking down the street and running to the rescue of damsels in distress?”

Liam laughed. It was deep and sexy and slid inside her like velvet and satin. She felt her stomach wobble, but it wasn’t the beer. It was him; and maybe the beer, just a little.

“You hardly seem like a damsel in distress.” His hungry gaze raked over her and she wondered what he saw other than her dirty jeans, messy hair, and her dust covered skin. 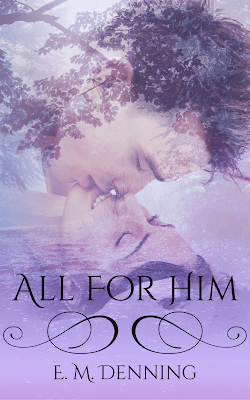 E. M. Denning is a writer from British Columbia. She loves her family and her animals and anything cute and fuzzy. She was born a hopeless romantic and when she’s not writing romance, she’s probably reading it. She loves love.