6 NYT and USA Today Bestselling authors come together to bring you romances guaranteed to make your blood run hot! Only 99c 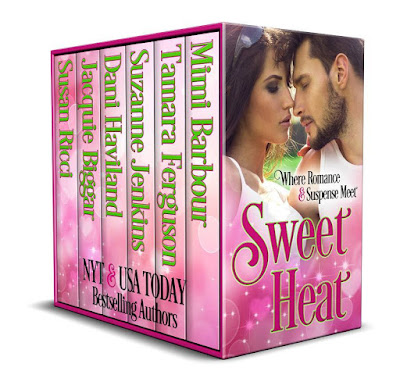 Passion, suspense, mystery. Something to suit every reader's taste. Grab a blanket and curl up with us for an unforgettable escape.

Get yours today before it goes away. LIMITED TIME ONLY.

Roll the Dice by Mimi Barbour

How can she love the guy who shoots her rather than the criminal?

This powerful romantic suspense about two detectives with differing agendas, yet after the same rapist, will grab your attention and keep you riveted. Their continuing conflicts will keep you entranced and their humor will make you laugh. Kai, the bald-headed, blue-eyed, purse-carrying cowboy tries to wrestle control from his new partner, gorgeous yet grumpy Aurora. Right till the shocking end she fights him… and then things really deteriorate.

A Readers’ Favorite Military Fiction Award Winner, as well as an IAN Book of the Year Finalist and New Apple Romance Selection for Excellence in Publishing.

After years of fighting their feelings, Luke Bryant and Kelly Callahan share an enchanting night of passion at her sister’s magical wedding. So when Luke returns home from Iraq as a disheartened wounded warrior, Kelly refuses to give up on him. It's not about his looks or his tragic past—it's all about the connection they've shared since they were kids. Fate has always meant for them to be together—she’s sure of it. But will that past night of enchantment be strong enough magic for a military hero to finally surrender his heart to the woman he loves?

After a wrong turn in Mobile, Margaret Fisher and her toddler, Ellen are lost. Then, their car breaks down in a small town in front of the garage owned by eligible bachelor, Frank McPherson.

Twelve years later, the peaceful life fifteen-year old Ellen has with her stepfather is threatened when after midnight, a stranger appears at the edge of the woods.

Jealousy, intrigue, and murder strive to tear them apart in this tale of unrequited love.

Luke, the Unexpected by Dani Haviland

Brought together by their love of vintage motorcycles, Luke and Holly have more than just an out of tune Indian Chief to deal with. The spurned Tanya wants revenge, and will stop at nothing to hurt Luke and all those he cares about.


Missing: The Lady Said No by Jacquie Biggar

Detective Augustus Grant is faced with his most baffling case to date. Well-respected race horse breeder, John Jorgenson, is murdered in his den days before the Kentucky Derby and the list of suspects is growing.

Complicating matters, Gus' ex-girlfriend is the last person to have seen the victim alive.

Rebecca Hayes owes the Jorgenson family her loyalty. They gave her a new life after a disastrous affair leaves her alone and pregnant.

With all the evidence pointing in Becky's direction, will Gus do his duty?

Turning Up the Heat by Susan Jean Ricci

Malibu O’Hare and Mark Bouchard are headed towards matrimony, until an old adversary sabotages their plans with a devious scheme.

Targeted next are Mark’s Uncle Clayton and Malibu’s best friend Priscilla. An unfortunate accident forces Clayton and Priscilla to postpone their upcoming wedding, and a criminal investigation is underway.

Contributing to the chaos is the arrival of Malibu’s estranged mother Ronnie O’Hare and her singing partner Javier, a man who’s no stranger to Mark and his beloved mama.

Will the sinister plots continue to succeed, or will love, commitment, and justice prevail? 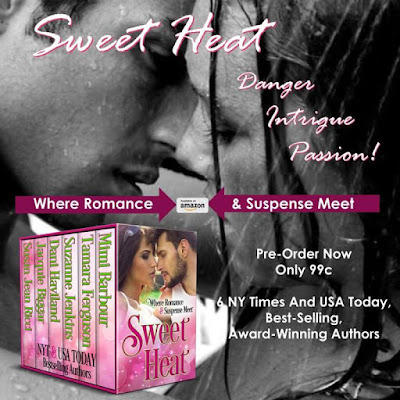 Mimi Barbour is an incredibly busy New York Times, USA Today and award-winning, best-selling author who has five series to her credit. The Vicarage Bench Series – Spirit/Time -Travel tales that have a surprising twist / The Angels with Attitude Series – Angels Love Romance / The Elvis Series – Make an Elvis song a book / Vegas Series – 6 books full of romantic suspense, humor and gritty conflicts / and… the fast-paced, edgy, humorous, romantic suspense, Undercover FBI Series. She also has numerous box collections and single titles to add to her credits.

Writing steamy yet sweet compassionate stories of fate that are wonderfully romantic, Tamara Ferguson is the multi-award winning, #1 international bestselling author of 8 #1 books and novellas in the Tales of the Dragonfly Romance Suspense Series, the Kissed By Fate Series, and the Two Hearts Wounded Warrior Romance Series.

Along with the 2015 Romance Reviews Readers’ Choice Award Winner That Unforgettable Kiss, Two Hearts Surrendered and Two Hearts Unspoken were also finalists for the 2016 IAN Book of The Year. Tales of the Dragonfly In Tandem was a romance finalist in the Indie Excellence Awards, while Tales of the Dragonfly In Flight was a romance suspense winner at the Readers' Favorite International Book Awards.

Since she remains a full-time caregiver for an autistic son (along with a bunch of adopted pets!), you can usually find Tammy working at home, where she spends a lot of time not completing her numerous home improvement projects, because she's writing or helping author friends promote their books on twitter.


Suzanne Jenkins writes page-turning contemporary romance, mystery, and women's fiction with passionately gripping characters that stay with readers long after they turn the last page. The Detroit Detective Stories, beginning with The Greeks of Beaubien Street are a reflection of American fantasy with historical reality. Pam of Babylon books consistently rank in the Top 100 Best Sellers in American Drama with over 500,000 downloads. A retired operating room nurse, Jenkins lives in Southern California.

Life has changed from jumping into a skidsteer loader to plow snow to pull-starting the walk behind weed whacker, but there are still enough hours in the day for the feisty old lady to propagate people for her novels and plants for her yard. Sharing is part of her personality, so creating books and photos to share all over the world makes her happy.

Her tenacious and perky attitude is reflected in many of her cyber children, whether they be a British lord stuck in 18th century North Carolina or a 6'7" time traveling 'fairy' who is out to champion anyone who is having a rough time dealing with difficult life situations.

Jacquie Biggar is a USA Today bestselling author of Romantic Suspense who loves to write about tough, alpha males who know what they want, that is until they're gob-smacked by heroines who are strong, contemporary women willing to show them what they really need is love. She is the author of the popular Wounded Hearts series and has just started a new series in paranormal suspense, Mended Souls.

She has been blessed with a long, happy marriage and enjoys writing romance novels that end with happily-ever-afters.

Jacquie lives in paradise along the west coast of Canada with her family and loves reading, writing, and flower gardening. She swears she can't function without coffee, preferably at the beach with her sweetheart. 🙂

Jacquie lives on Vancouver Island with her husband and loves to hear from readers all over the world!

You can join her street team on Facebook, her exclusive Review Crew or sign up for her newsletter.

An Award-Winning, From Women’s Pens Author, and Humorist, Susan Jean Ricci is best known for her Cindy’s Crusades Series, starring the hilarious duo Cindy and Jay DeMatteo. These cherished characters are first introduced in the novel Dinosaurs and Cherry Stems, and return to entertain you in the sequel The Sugar Ticket. Their mischief making continues in these shorts Two Miracles for Christmas, A Valentine’s Day to Remember, and The Blind Seer.

More recently, Ms. Ricci’s When Sailors Play has been included in Uvi Poznansky’s Bestselling Anthology Love in Times of War. Her current tales are offered in the following anthologies Unforgettable Heroes – Unforgettable Passion, and Sweet Heat – Where Love & Suspense Meet.

Susan and her husband Joe live in a beautiful town near the sea, and when time allows, they love to travel. Together they have seven children, ten grandchildren, and harbor their queen of the castle Emma the Lab.