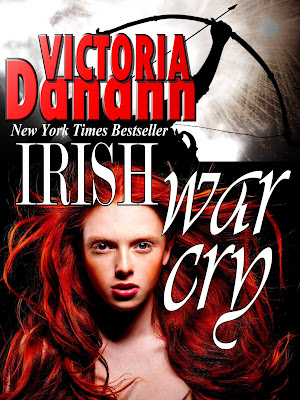 CRAP IN A CAULDRON

What if you woke up to find you're no longer human?

Rosie hired Irish elf twins, Sheridan and Shivaun O'Malley for the newly formed Department of Interdimensional Trespass. They were wild and nearly feral, raised in the New Forest Preserve with no contact with the modern world until Black Swan made them the only female hunters other than Lady Elora Laiken.

When Sher was assigned as Finngarick's partner, they were both stunned to find they weren't only partners, but fated mates. Blissful fated mates who enjoyed each other for the span of less than a month before Sher was abducted by one of the very demons they hunted.

Meanwhile, the "Wild Bunch", Black Swan's new nickname for Rosie's hunters, has its own problems.

Find out why readers are calling this series "addictive", "tantalizing", and "sooooo"elfing" good".

Sizzle with suspense, Victoria's signature humor, kick ass heroines and gorgeous sexy ex-vampire hunting elves. Grab your copy and an oxygen tank! 'Cause you're gonna be breathless. Get it TODAY!

“I brought you food. Why aren’t you eating?”

“Of course you are. Elves must consume food for fuel. It’s part of the inferiority of your species.” She glared at him. “Oh, sorry. I keep forgetting that you’re sensitive about that.”

“I can no’ be sensitive about somethin’ that is no’ true. I simply think ‘tis rude for you to insist on repeatin’ the shite.”

He laughed. “You are inferior, but it’s so adorable when your color changes. Kind of chameleon-like.”

“There’s nothin’ chameleon-like about it. I have fair skin…”

“And you anger easily.”

She ignored that. “Chameleons change colors to match the environment. Do you see anythin’ pink in here?”

“Exactly. So I ask you. Would a superior bein’ get somethin’ so simple so wrong?” He shrugged, smiling and completely undeterred. “Annnnnnd, I do no’ anger easily.”

“Well, it seems you’re wrong about that, too, then.”

He laughed. “I’ll bet your sister is not so much trouble.”

She barked out a laugh. “Oh, demon, you have no idea. I’m a clump of clotted cream compared to Shivaun.”

“Shivaun.” Lyric turned the name over in his mouth like he liked the taste of it. “It’s more musical than Sheridan.”

The question dripped with suspicion and suddenly she was eager to steer the conversation in another direction. It was killing her to be separated from Torn, little by little, every day. But that was preferable to having her sister fall into the hands of the demon. She could have slapped herself for saying Shivaun’s name out loud.

Even if he was astonishingly beautiful with the sexiest voice imaginable and also good at jigsaw puzzles, she was sure his windowless den was not the future Shivaun dreamed about. Although, since they’d promised each other to be celibate and unmated, they’d never allowed themselves to fantasize about lovers. Or, if they had, they’d never shared with each other. Even twins keep some secrets to themselves.

He chuckled. “Well, you kind of are, elfess.”

“What? Elfess?” He chuckled. “Why not? I rather like it. Makes me want to sing ‘Jailhouse rock’.”

“What?” It was clear that she didn’t follow the reference.

“Sure.” She flopped onto one of the long divans and drummed her fingers on her thigh.

He cocked his head and studied her in that I-can-see-through-you way of his. “Did you sleep while I was gone?”

That was ignored because he’d become distracted with a thought. He strode down the hallway that was defined by archways so smoothly curved they looked like beach art made from wet sand.

In a few seconds he was back. “You haven’t used the facilities either.”

“Whatever. What was the point of having me add a bathroom if you weren’t going to use it?”

“Oh yeah! It was so much work. Was that your fourth finger that you crooked or your fifth?”

She gave him a look that said, “If you finish that sentence, you’re going to wish you were someplace else.”

With a flick of his wrist four arched fireplaces carved into smooth walls jumped to life. Even though there was no evidence of fuel, flames crackled and danced over glowing embers.

“Nice trick. No. I’m no’ cold. I’m from the New Forest. ‘Tis very far north which means we do no’ get cold easily.”

Faint lines formed between her brows. “By now you should be gettin’ the idea that I’m no’ amusin’ in any way. I’m plain and borin’ and excruciatingly unentertainin’. So let. Me. Go.”

He sat down on the divan across from where she sat. “You so underestimate yourself. I find you more fascinating than anything that’s happened to me… well, maybe ever.”

He shook his head. “My name is Lyric. And there’s already a musician named, well, he doesn’t know how to spell, but still, the idea is taken.” Sher slapped both palms to her face in exasperation. “What was that?”

“I can exchange you for Shi…”

“The interrupting is becoming tedious. Why not?”

“Because you get this funny look on your face like you’re thinkin’ about masturbatin’. And I just do no’ want to see that.”

He laughed out loud. “I can’t imagine why you think you’re not amusing.” His eyes drifted to the Chinese takeout cartons that sat on the large low table between them. “Is it that you don’t like Chinese?”

She looked down at the little white cartons with wire handles and red calligraphy symbols on the sides. Sheridan was a recent convert, since she’d never had Chinese until a few weeks before, but she liked it. Of course. Everybody likes some kind of Chinese and it looked like Lyric had brought a variety buffet.

She did like Chinese. And she hadn’t eaten for what was probably… “How long have I been here?”

“I think that’s impossible,” she said, just realizing that she hadn’t been eating or sleeping or using the new bath facilities.

As if Lyric really could read her mind, he said, “I’m not an expert, but I believe it’s not possible for elves to go so long without food, drink, sleep, and…” He glanced toward the hall that led to the bath, but didn’t want to offend unnecessarily by bringing up such a sensitive subject. Again.


Simon Tvelgar wasn’t always the staid and steady director of the Order of the Black Swan headquarters in Edinburgh who manages the most unruly congregation of talented misfits ever assembled into one organization.

No. He was once a young, beautiful, athletically gifted knight, wild and lustful as any, until he fell in love with a Scottish fae girl who on bereavement leave. He lost her to the stones of the Orkneys as they picnicked there on Lammas twenty years before. She was swallowed up and faded from view, a look of panic on her face as she reached for him while her mouth silently formed his name. He lunged to grab her, but she was simply gone.

Year after year he traveled back to the Orkney Islands and talked to locals, but Shivaun was never seen again. Simon channeled his sorrow and loneliness into work until he eventually rose to the highest position open to an ex Black Swan knight.

Now, for the first time, he thinks there might be someone who could find Shivaun. Rosie Storm.


“When it came to my attention that D.I.T. was going to Dublin, I thought of Torn Finngarick. After all he knew the culture and could, perhaps, be useful. I confess to the ulterior motive of wanting to see all the floaters brought in from the cold. He was one of the remaining few. And everybody deserves another chance. Right?

As I mentioned earlier, my wife was working for Black Swan setting up a unit called Department of Interdimensional Trespass. It seemed that creatures coming and going at will were causing havoc that had, until recently, been unexplained, believed to be fiction of the myth or folklore variety, or dismissed as interplanetary visitations. Rosie was busy hiring and training people who were going to function as police.

Anyway, I had served with Sir Finngarick when I was first knighted as the fourth member of the infamous Z Team and came to know him quite well. Most believed he was irredeemable. I did not.”
Glendennon Catch, Sovereign, Jefferson Unit

Victoria Danann is the New York Times bestselling author of twenty romances. For the past four years in a row, Victoria's Knights of Black Swan series have won prestigious Reviewers' Choice Awards for both BEST PARANORMAL ROMANCE SERIES and PARANORMAL ROMANCE NOVEL OF THE YEAR. This past year three of her series and three of her novels were nominated. Two of her series took the top two places and two of her books took first and second place in the PNR Novel of the Year category.

Victoria co-hosts the popular ROMANCE BETWEEN THE PAGES podcast which can be found on itunes or at → www.romancecast.com