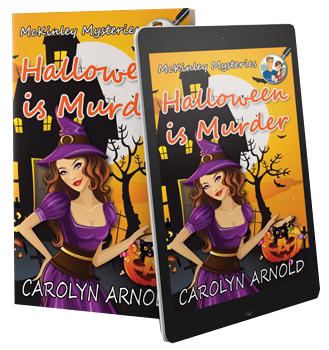 Beware of all that goes bump in the night…

Sean and Sara McKinley are excited about the haunted house they’ve set up as a Halloween charity fund-raiser, but things take a ghoulish turn when the reporter covering their story is found dead. With the media keeping mum about how she died, Sara’s curiosity is piqued, and she convinces Sean to take on the investigation through their PI firm.

But this case is not without its challenges. The police are actively investigating it, as well, and it’s not even clear that the woman was murdered. It will take a little cloak-and-dagger, dress-up, and finesse for the McKinleys to get to the bottom of it, but they aren’t the kind to give up.

As they troll for leads and work through the skeletons in the reporter’s closet, they unearth a few suspects, but they’ll need to carve out the whole truth if they’re going to find her killer. If they do so fast enough, there might even be time for a little trick-or-treating.

SARA WAS CALLING YOUR SOURCE from her home office one last time. That’s what she told herself anyhow. She’d lost count of how many times she’d called them, but she had always met with a busy signal. And there it was again…

She lowered the receiver to its cradle. One could be certain that the station had plenty of rollover lines, so it had to be other people calling in about Chloe’s death, too. Other crazy people like her wanting answers. At least, she was sure that Sean thought she was crazy, but she had a niggling sensation in her gut that they needed to look into Chloe’s death.

Maybe it was because she and Sean were surrounded by murder wherever they looked and wherever they went. Even when they were supposed to be relaxing on their honeymoon, a case had found them. And the inclination to view any death as suspicious was embedded in her psyche from years working as a homicide detective with the Albany PD. Sure, Chloe could have died from natural causes, an accident, or even suicide, but it was also just as likely that someone had caused her death intentionally. To quiet her mind, Sara had to find out which scenario applied to Chloe. And if her calls weren’t making it through, there was another route she could take.

She flicked on the monitor, pleased that she had the habit of leaving her computer on most of the time. She brought up an Internet search engine and typed in Chloe’s full name and Your Source. This brought up pages of results. The first entry was a post from the television station entitled, DEATH OF LOCAL REPORTER CASTS DARK CLOUD OVER ALBANY. Sara clicked to open the link.

Scanning down the page, she found she was no closer to knowing what had happened to Chloe. There was no cause of death listed, but rather, the piece read like an obituary with a recap of Chloe’s career accomplishments and brief mentions of her personal life—she had a sister and had died single. That was it. Somehow it seemed like a sad summation of a twenty-five-year-old woman’s life that had been cut so short. There was so much that Chloe had yet to experience, and Sara hoped that Chloe had at least known romantic love at some point in her life.

Sara returned to her search results and clicked on many of the other links, but they were more or less copycats of the statement Your Source had published.

Every Day Is Halloween

“A nice and fun, old-fashioned mystery. Halloween is Murder was a very well-written and fast read with great characters and a fun mystery with a resolution that I did not see coming.”
–The Reading Café

Ask anyone who loves Halloween and they’ll probably tell you their favorite part about it is dressing up. When you put on a costume, you can be whomever—or whatever—you want. It’s liberating! On top of that, it’s likely that there are all kinds of goodies lying around the house.

When I was a girl, I loved playing Barbie. I loved dressing her up and assigning her whatever life story I wanted. And, man, did I enjoy it! Maybe for a little too long, in fact. I kept playing into my early teens! At the time, I felt like some sort of freak. I certainly wouldn’t have wanted this news to get out to the kids at school. They probably would have called me a baby or something like that. So I kept this part of my life a secret, and I justified my addiction by pinning the blame on my sister, who is six years younger than me—she needed someone to play with!

Now that I’m older—much, much older—I look back and find this aspect of my past amusing. I realize that it’s absolutely nothing to be embarrassed about, but it shows me that I’ve always loved telling stories and acting them out. No wonder I became an author!

In the grand scheme of things, Halloween is very similar. The holiday allows people of all ages to participate in this fantasy, if only for one night. But as an author, I get to experience Halloween every day of the year. I become someone else every time I sit at my desk and immerse myself into the worlds of my characters. I get to delve into their minds, to know their thoughts, their feelings, their personalities, their lives. And I get to share my imagination with my readers. Now that’s a real treat!

Speaking of, I’m going to grab a small bowl of candy corn and gummy peaches and get to writing. Happy Halloween! 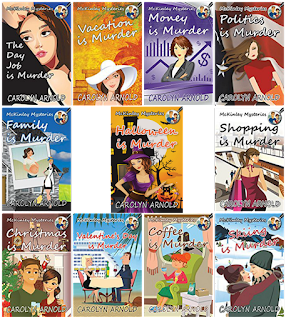 What to expect from the McKinley Mysteries:

Romance. Humor. Murder. Are you looking for a murder mystery without all the graphic violence and foul language? Something that you can enjoy in an afternoon and walk away feeling good about afterward? How about a dash of humor and romance? If so, meet former detectives Sean and Sara McKinley. When a billionaire leaves them all his money, they no longer have to work, but they find themselves sticking to what they’re good at—solving murders. Undercover, off the books, and around the world, they’ll get to the bottom of things…and romance it up along the way. 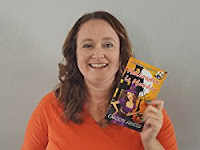 CAROLYN ARNOLD is an international bestselling and award-winning author, as well as a speaker, teacher, and inspirational mentor. She has four continuing fiction series—Detective Madison Knight, Brandon Fisher FBI, McKinley Mysteries, and Matthew Connor Adventures—and has written nearly thirty books. Her genre diversity offers her readers everything from cozy to hard-boiled mysteries, and thrillers to action adventures.

Both her female detective and FBI profiler series have been praised by those in law enforcement as being accurate and entertaining, leading her to adopt the trademark: POLICE PROCEDURALS RESPECTED BY LAW ENFORCEMENT™.

Carolyn was born in a small town and enjoys spending time outdoors, but she also loves the lights of a big city. Grounded by her roots and lifted by her dreams, her overactive imagination insists that she tell her stories. Her intention is to touch the hearts of millions with her books, to entertain, inspire, and empower.

She currently lives just west of Toronto with her husband and beagle and is a member of Crime Writers of Canada and Sisters in Crime.

What inspired you to write Halloween is Murder?

Halloween is probably the most popular holiday next to Christmas! Who wouldn’t want to read a Halloween-themed murder mystery? And it’s kept light and fun.

I understand this is part of the McKinley Mystery series, but can this book stand on its own? And can you share with us what the book is about?

Halloween is Murder can easily be read as a standalone.

In Halloween is Murder, Sean and Sara McKinley are set to celebrate Halloween in style, and they’re eager to invite the entire city to visit their haunted house fund-raiser. But their recorded segment for a local television station goes unaired and the reporter is later found dead. Sara’s determined to get answers, and she brings Sean and their entire PI firm along with her. There are more tricks than treats, however, as they try to carve out the truth.

Please tell us a little more about the McKinleys and their series.

Those three words best sum up what readers can expect from the McKinley Mysteries series.

These stories are cozy in nature and appeal to readers who love a murder mystery without the gore or foul language. Each installment is novella length, with the exception of The Day Job is Murder, which is a short story. This makes the books “perfect for curling up for an afternoon” (Brooke Blogs) and “perfect to bring along on vacation” (Bound 4 Escape). The Layaway Dragon describes the series as, “perfect if you like clean-cut characters, a sweetheart romance, having the money to follow your dreams, and crime-solving abilities.”

To tell you a bit more, Sean and Sara McKinley are former homicide detectives with a talent for attracting death investigations wherever they go. When a billionaire leaves them all his money, they no longer have to work for a living, but they find themselves sticking to what they’re good at—solving murders. From sleuths to eventual private investigators, they’ll do whatever it takes to solve a case. Whether that means going undercover, off the books, or around the world, you can be certain they’ll be romancing it up along the way.

This is the perfect book series for fans of Hart to Hart, Castle, Colombo, Monk, Rockford Files, Psych, and Magnum, P.I.

What can readers expect when they crack the cover?

They can expect to feel the chill in the air, to see the colored leaves on the ground, and to slip into the world of make-believe in true Halloween spirit while Sean and Sara search for a killer. There is also, of course, some humor and romance along the way.

Name one specific just-for-fun liberty you took with the book?

In Christmas is Murder, I named the chapters after holiday-related songs, and I carried a bit of this fun over to Halloween is Murder. Each chapter is titled with a play on Halloween-related words or phrases. Here are some examples (in no particular order): “Dreading the ‘Boo,’” “Stuck Between a Grave and a Tombstone,” “An Attempt to Sweeten the Cauldron,” and “Grim Reaper Claims a Victim.”

What’s your favorite part about Halloween?

Seeing how happy people are when they dress up and pretend to be someone else for the night. And let’s not forget the candy!

What makes Halloween is Murder the perfect Halloween read?

It’s fun and light, just like the holiday. Throw in a murder to solve, dressing up, some cloak-and-dagger, and a haunted house, and who can say no to that?