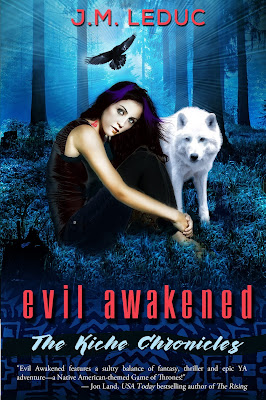 From one generation to the next, legends of good and evil have been passed down around Indian campfires. With each passing generation, less is believed. To the young, they’re just stories, but to the elders, they are warnings.

In the woods, which border between the reservation and the Everglades, four teenage Cree braves recite an ancient ritual. Not understanding the words they say or the implications of their actions, they call forth a demon which had been cast into the netherworld with no chance of escape . . . unless man called it back. Free, it has one plan; build an army of beasts, and ultimately, become immortal by feeding on the spirit of the one destined to become the Kiche—the Sky Spirit Goddess.

It has been foretold that the gates of the netherworld will be opened and it will take the wiles and courage of a sixteen-year-old girl, whose skin is as white as winter’s snow, to send the demons back and save an entire nation.

Pamoon, left abandoned at birth on a Cree reservation, has been marked with a flame on both her neck and left palm. All her life, they have been a nuisance, but now they mark her destiny. With the fate of her friends’ lives on the line, will she have the courage to pick up the gauntlet and walk the path the fates chose for her before her birth? In EVIL AWAKENED, Pamoon and her wolf cub, Scout, begin a journey that may end in her demise or might possibly take her to worlds only humans can imagine. A journey to both heaven and hell. A path only the one destined to become the Kiche—the Sky Spirit Goddess—can travel. She’ll need help if she is to survive; help only the spirits can provide. Let’s pray it arrives in time.

Whatever evil man creates, only man can defeat.

The woods have always been sacred to Native Americans, but sacred doesn’t always equate with good. Like the sweet smell of Pine sap mixed with the pungent odor of decaying humus, spirits run the gamut of good and bad.

Spirits always hear the cries of those who call them; tonight . . . they’ll answer.

The smell of the Slash pines and Live oaks permeated the thick blanket of humidity. The temperature remained tolerable, but with air so thick, it was as if the clouds had descended from the sky and fallen upon the earth. The stillness of night and cover of foliage made the environment more oppressive. To a tourist or stranger, the weather might have seemed unbearable, but to those who grew up in and around the Florida Everglades, it was just another early spring evening.

Bobby and his friends huddled around a small, dimly lit fire nestled in the woods between the city limits of Swamp Ridge and the Indian reservation. Sweat poured from their skin, and alcohol swam through their bloodstream. Their teenage, liquor-infused imaginations burned hotter than the heat emanating from the glowing embers. Beer cans and an empty bottle of cheap gin littered the makeshift campground.

“I’m not sure about this,” Bobby, the most rational of the four, said. “You know what Powaw says about this stuff.”

Scott laughed at Bobby’s apprehension. “Don’t be such an âpakosîs,” he slurred. “We’re just screwing around. Besides, Powaw’s nuts. All the elders are crazy.”

Glassy-eyed, Bobby glared at his friend and pointed a stick in his direction. “Don’t call me a mouse. It just doesn’t feel right messing with this kind of thing.”

Mike, the alpha of the group, took his last swig of beer and crushed the can, belching at the same time. “You two losers are always arguing. Let’s do this.” Bobby watched him look over at Ralph, lying on the ground, passed out with pine needles stuck to his face. “Wake up the lightweight,” Mike said. “He has the spell.”

“They’re not spells,” Bobby mumbled under his breath. “We’re not witches.”

Mike took a step toward Bobby, his hands balled into fists. “What’d you say?”

“Relax, Mikey,” Scott said, stepping between them. “Every time you get drunk, you want to pick a fight with one of us.”

“I’m not drunk. I just don’t like when Einstein over here says shit under his breath.”

Scott shoved him, jokingly. “You’ve been spending way too much time with the elders. We’re just out here screwing around. You know as well as I do, this stuff is just legend. These things don’t actually work.”

“Then why bother? Let’s just clean up and go home.”

Mike brushed the dirt off his jeans, tied his long, black hair back in a knot on top of his head, and smirked. “We do it because it’s cool. There is nothing for us to do back on the reservation; at least this gives us a reason to come out here and drink. If you’re scared, little âpakosîs, then go home.”

Tossing the stick into the fire, Bobby’s face crimsoned. “I’m here, aren’t I,” he said. Balancing himself precariously, he shoved Ralph with the toe of his boot. “Wake up.”

Mike splashed beer on his friend’s face to speed up the process.

Drunkenly, Ralph slapped at the alcohol, smudging the dirt on his face, then stumbled to his feet.

After giving Ralph a few minutes to focus his thoughts, Bobby and the others formed a circle around the fire. Taking in the view, he thought of how all his friends looked different, yet they were, at their very core, the same. He was the smallest of the four, but the smartest. Ralph was the quiet one, yet he could be dared into trying anything. Scott was the biggest, the group’s protector. He’d stand up to anyone who dared insult his friends. And then there was Mike. Mike was the athlete, the one who seemed to go through puberty when he was ten, and always acted as if he had too much testosterone rushing through his veins.

All different, yet the same. They all had an olive skin tone with a complexion most girls would kill for. They all had straight, silky, black hair which they wore long and straight. And they were all proud of their Native American heritage.

All different, yet the same.

Bobby’s thoughts were interrupted by the sound of Ralph clearing his throat. Turning his attention to his friend, he watched Ralph pull the ritual he had torn out of his grandfather’s old book from his pocket, unfold the paper, and start reading.

The trio repeated the Cree words none of them understood and could barely pronounce.

Bobby eyed Ralph, who had stopped reading and gruffed his frustration. “If you want the spirits to hear us, we need to say this like we mean it.”

The four exchanged glances; Ralph nodded and started reading from the beginning. This time, the others repeated the words as if they believed whatever it was they were saying.

The still, stale air was broken by a breeze that whistled through the woods causing the rustling of leaves and branches, creating the sound of shaking maracas. The sudden change in the environment seemed to energize Ralph, who began to recite the words with increased attitude and volume. The others followed suit, and with every word emoted, the winds surged and swirled.

The gusts swept the dirt, pine needles, and dying embers into the night, making them feel like bee stings striking Bobby’s face. An unexplained fear began to bubble inside him as he slapped the dirt from his eyes. Trembling, he tore the paper from Ralph’s hand to stop him from repeating the ritual. Crumpling it in his fist, he threw the paper towards the fire. An acrid blast of wind blew it away from the flames and swept it toward the trees.

The hair on the back of Bobby’s neck tingled. “I don’t like the way this feels,” he whispered, dread dripping from his words. “Let’s get the hell out of here.”

The others must have felt the same way, for they hastily grabbed their packs and started running.

As Bobby raced through the low-branched pines, he thought he heard Mike. The squeal was so short-lived, he couldn’t be sure; his fear forced him to run faster. With each burst of wind, he heard another one of his friends cry out. The combination of running, alcohol, and adrenaline made him want to throw up; he choked it down and kept moving. Turning back toward the noise, Bobby saw nothing through the curtain of night. The air, thicker and heavier than before, forced him to breathe through his mouth. Turning forward, he glimpsed a low hanging branch in his peripheral vision—too little, too late. The bow smacked his forehead, knocking him to the dirt. Instinctively, his hand went to his cheek; he felt the sharp sting of the gash and the wet warmth of fresh blood. His feet scrambling, his hands clawing, it took all his resolve to put one foot in front of the other. His legs finding a rhythm, he sprinted onward.

Seeing the lights of the reservation through the thickness of leaves, Bobby emitted a short sigh of relief before one last gust of wind struck his face. His eyes screamed in horror and his vocal cords danced in pain, but sound never moved past his lips.

Mark Adduci, writing as J. M. LeDuc, is a native Bostonian, who transplanted to South Florida in 1985. He shares his love and life with his wife, Sherri and his daughter, Chelsea.

Blessed to have had a mother who loved the written word, her passion was passed on to him. It is in her maiden name he writes.

J.M. LeDuc's first novel, "Cursed Blessing," won a Royal Palm Literary Award in 2008 as an unpublished manuscript in the thriller category and was published in 2010. The rest of the Trilogy of the Chosen: "Cursed Presence" and "Cursed Days" followed in 2012, as well as a novella, "Phantom Squad"--a prequel to the trilogy. "Cornerstone," the continuation of the Phantom Squad Series was published in 2013 to critical acclaim.

"SIN" is the first book in the new Sinclair O'Malley Series.

J.M. is a proud member of the prestigious International Thriller Writers (ITW) as well as the Florida Writers Association (FWA) and loves to interact with his fans. He can be reached at jm_leduc@yahoo.com and on Facebook on his author page.