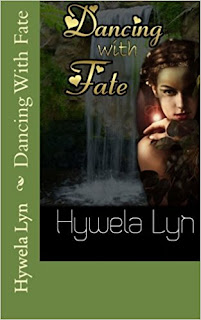 When Terpsichore, the Greek Muse of Dance, is assigned to revisit 5th Century Wales, and help the people regain their love of dancing, her task seems simple enough. She is unaware there is a hidden agenda. Before she can return to Olympus her path crosses that of the mysterious Myrddin, and her heart is lost.But Myrddin is promised to another. His mind is set on the dangerous task that lies before him, and the woman he has sworn to save. Nevertheless, he cannot deny the growing attraction between him and the beautiful stranger he meets along the way.Terpsichore and Myrddin face a deadly force that threatens to part them forever. Is she destined to lose the only man she has ever truly loved? Is there nothing she can do to save him? Finally, when all seems lost, in desperation she finds herself DANCING WITH FATE.

DANCING WITH FATE IS A BEAUTIFUL AND MAGICAL LOVE STORY BY AUTHOR, HYWELA LYN.  I LOVE HOW SHE COMBINES 2 LEGENDS, GREEK MYTHOLOGY AND WELSH LEGENDS TO CREATE THE PERFECT LOVE STORY.  I LOVE TERPSICHORE AND MYRDDIN.  BOTH WERE SO FULL OF LIFE AND STRENGTH.  EVEN THOUGH TERPSICHORE IS A GODDESS, I THOUGHT MYRDDIN HAD HIS OWN MAGIC.  THEY WERE MEANT TO BE TOGETHER AND WOULD SACRIFICE THEIR LIFE FOR THE OTHER.  I WAS DEFINITELY DRAWN INTO THIS MAGICAL LOVE STORY BY THE AUTHOR.  IT WAS SO BEAUTIFUL AND MADE ME STILL BELIEVE IN LOVE AT FIRST SIGHT AND SOUL MATES.  TERPSICHORE AND MYRDDIN'S LOVE WAS SO REAL AND BELIEVABLE.  YOU NEVER DOUBTED IT.  THERE WAS CONSTANTLY ACTION GOING ON THROUGHOUT THE STORY UNTIL THE VERY END  I HIGHLY RECOMMEND YOU READ THIS AMAZING LOVE STORY.  5 STARS

Biography
Hywela Lyn spent most of her life in Wales and the beautiful countryside and legends inspired her to write. Although she now lives in a small village in England, she is very proud of her Welsh heritage and background.

She enjoys weaving romantic tales of the future, and distant, mysterious worlds, stories to truly take you 'out of this world'and beyond. Wherever the muse takes her.

She loves all animals, especially horses and dogs. She lives with her long suffering husband, Dave, and has two horses, a 'feral' stable cat and a rescued terrier called 'Choccy'. Her pen name is a combination of her first two names. 'Hywela' is Welsh and her first name but it was never used and she has always been called by her second Christian name, Lyn.

Hywela Lyn's first novel, 'Starquest', a futuristic romance, published by the Wild Rose press was followed by a second book in what has become the 'Destiny trilogy, 'Children Of The Mist'. The third in the series, entitled 'Beloved Enemy' was released by the same publisher on 11th March 2016. They can each be read as a 'stand alone novel'.

Her fantasy novella 'Dancing With Fate' is also available now as an E-book from Smashwords, Kindle, and in print.

Lyn loves to hear from readers, and will always reply if you leave contact details.To know a reader enjoyed her books and was able to escape for a little while into another world makes her happier than words can express.
Posted by Girl with Pen at 8:00 AM