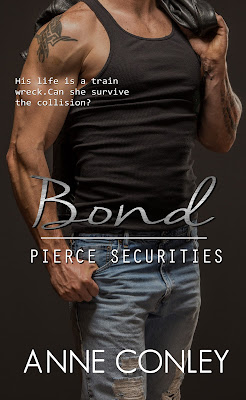 
This has to be one of the weirdest relationships on the books.

Deena Rae is a loner—a strong, independent woman who needs nobody. There is the possible exception of Mr. Fine Ass, with whom she’s begun a strange courtship. He’s certainly a nice diversion from her new job with Pierce Securities and her first solo gig with the company.

Slade is in debt to a man nobody wants to owe, his sperm donor just died, and somehow, Deena Rae knows the half-brother Slade’s never met. He can’t keep his eyes off his gorgeous bitch of a neighbor who keeps her drapes open, even when she’s “entertaining.” He’s told her, though, he’s a train wreck and they shouldn’t get involved.

Deena Rae is riding Slade’s train all the way to the end, whether she likes it or not. Slade is working for her mark, and her mark suddenly wants her dead.

And Slade’s the man who’s got to do it.

“What are you doing in here, Ginger?” His rough growl in her ear sent a shiver of goose bumps racing up her spine.  Deena Rae bristled at the Ginger comment, but squirmed to get out from under him.  It was no use.  She was stuck.  His grip tightened on her wrists, as his legs wrapped around hers to still them.

And his other hand roamed.

His breathing was ragged as his hand explored more than was necessary to make sure she wasn’t packing heat, which she was, but didn’t think they were in the right position for him to find it.

“You know what they say about curiosity and shit.”  She shrugged, going for flippant, even as her heart raced.  Problem was, she wasn’t really scared anymore.  She should have been, but Deena Rae couldn’t muster the fear she needed to fight back.

His hand was definitely doing more than looking for weapons, if the growing length at her backside was any indication.  Each piece of her lock-pick kit was tossed into the immaculate carpet by her head.  Serial killers were clean, she reminded herself, trying to gather the terror she knew she should be feeling.  Why wasn’t she feeling it?

“How did you get in?”  His breath was hot in her ear, and if she wasn’t mistaken, his lips brushed it.  She was on fire.  Thank God he wasn’t looking at her face.
A soft chuckle escaped her.  “Would you believe you can learn anything on Youtube?”

A rumble of accompanying laughter came from his chest, pressed against her back, but he raised himself and with very little effort, had her flipped under him.
It wasn’t like she was fighting Mr. Fine Ass, but she was a tall woman.  At five foot ten, she’d always wanted a man to handle her, like, well, like a man.  Rick sure as hell wasn’t up to the task.

But now she was face to face with him, she couldn’t really breathe.  And her arms were still pinned at her head.

His face was fucking gorgeous.  A small scar under his right eye.  Deep brown eyes the color of teak wood.  Full lips.  Chiseled cheekbones.  Dude could be a model.

One of his crazy eyebrows was quirked up, wrinkling his forehead slightly.  “Are you trying to come on to me?  If so, this is a bit out of the ordinary.”  He was relaxing his body on top of hers, even if he still held her wrists in a death grip above her head and had a massive growing bulge still pressing against her thigh.

“I’ve never been accused of being ordinary,” she breathed at him, wondering where the hell all the air in the room went to.  Her heart was still pounding in her chest, and her breathing was hard and heavy.  She knew her breasts were practically in his face, but to his credit, he wasn’t looking.  But they were certainly pressing against his ever-so-hard chest.

His eyes flickered from her eyes to her lips, and his free hand twined through a tendril of her hair.  When they finally snapped back to her eyes, they were filled with resolve.

“This is bad timing, Ginger.  My life is a train-wreck right now, or I would give this a go.”  He smirked as he pressed his bulge into her thigh.  “But you really should just stick to your Tuesday Night Specials.”

Since he was relaxed, she whimpered a bit, pretending to pout while biting her bottom lip, watching his eyes snap back to her lips.  Using the distraction, she wound her legs around one of his, and rolled, effectively pinning him under her.
He let loose of her arms, and grabbed at her hips as she stood.

“Wow.  That’s cocky, Mr. Fine Ass.  But I hate the name Ginger, and train wrecks aren’t my style.”  She managed to get out of the door with a little dignity even though she was embarrassed to have gotten caught, and was ridiculously turned on.

But she’d managed to walk out of there with the upper hand, and that was what was important, right?

Add it to goodreads:  https://www.goodreads.com/book/show/34962712-bond?from_search=true