Review of Down & Dead in Dallas by Vicki Hinze 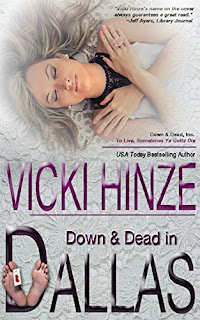 Christine Branch is elated. Finally her sister, Caroline Branch Easton, has left made the break from her abusive ex, Martin Easton, and returns to Dallas to Christine’s ranchette to heal. Only Martin refuses to let her go. Within twenty-four hours, his thugs are doing everything they can to intimidate Christine into returning home. Christine knows she must do something to get her sister the time and space she needs to heal—and she concocts a plan:

Operation Switch and Bait. The sisters trade lives and Christine baits the thugs into following her. It works! Caroline undergoes counseling, eventually divorces Martin, though he refuses to accept it, and the operation continues… until Martin shows up at the ranchette and issues a return-home ultimatum. Christine’s had enough. She ends the operation, resumes her identity and disappears.

Christine continues with the switch, hoping confusion of two Carolines will assist in a clean getaway. On Christmas, Caroline calls Christine. A chef from Dallas is assisting her. She’s in Even, Georgia but within an hour leaves for Sampson Park. She’ll call again as soon as she’s settled.

But Caroline doesn’t call. And three months later, Christine remains unable to find anything on the mysterious Sampson Park, or on her sister’s whereabouts. She must take the risks of leading Martin to Even to find out what happened to Caroline.

Has she escaped, or is she to remain Down and Dead in Dallas?

DOWN & DEAD IN DALLAS IS BOOK 3 IN THE DOWN & DEAD, INC. SERIES.  I REALLY LOVE THIS SERIES AND FOUND MYSELF DRAWN INTO THE STORY ONCE AGAIN.  THIS BOOK CONTINUES CAROLINE AND CHRISTINE'S STORY ALTHOUGH IT CONCENTRATES MORE ON CHRISTINE.  CHRISTINE AND CAROLINE TRADE LIVES IN ORDER FOR CAROLINE TO MAKE A CLEAN BREAK FROM HER ABUSIVE HUSBAND, MARTIN.  CAROLINE LEAVES WITH A CHEF AND CHRISTINE DOES NOT HEAR FROM HER AGAIN.  CHRISTINE BECOMES WORRIED AND BEGINS TO SEARCH FOR HER SISTER AND A PLACE CALLED SAMPSON PARK.  SHE WORRIES THAT SOMETHING TERRIBLE HAS HAPPENED TO HER SISTER.  CHRISTINE FINALLY LOCATES THE CHEF AND PRETENDS TO BE HER SISTER.  SHE WILL DO WHATEVER IS NECESSARY TO FIND HER SISTER INCLUDING LYING.

I REALLY LOVE THIS SERIES.  THIS IS SERIES IS FILLED WITH SUSPENSE, ROMANCE AND ALOT OF ACTION.  I REALLY ENJOY ALL THE CHARACTERS AND STORY LINES.  DOWN & DEAD IN DALLAS WAS NO EXCEPTION.  IT WAS A VERY ENJOYABLE READ THAT LEFT YOU WANTING MORE. THE CHARACTERS HAD TE RIGHT ABOUT OF CHEMISTRY AND WERE SO BELIEVABLE.  I LOVE HOW VICKI HAS CREATED A TOWN WHERE PEOPLE GO AND SEEK REFUGE AND SAFETY WHEN THE LAW IS UNABLE TO PROTECT THEM OR HAS FAILED THEM.  THE PEOPLE AND TOWN FILL MORE LIKE A HOME AND WILL DO WHATEVER IS NECESSARY TO PROTECT ONE ANOTHER.  IF YOU HAVE READ THIS SERIES YET, YOU DO NOT KNOW WHAT YOU ARE MISSING.  I RECOMMEND YOU PICK UP THE FIRST BOOK AND BEGIN.  YOU WON'T BE DISAPPOINTED.  5 STARS 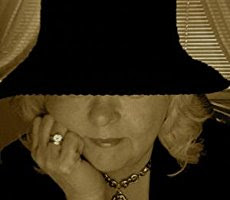 Biography
Raised in New Orleans, Vicki Hinze began writing before Kindergarten but her journey to writing books included a lot of corporate pitstops. Eventually, she settled in and her first novel landed an array of awards and on the bestseller list. With nearly 40 books published, she's been back many times with awards in multiple genres and appearances on multiple bestseller lists, including USA TODAY. Vicki is recognized by Who's Who in the World as an author and an educator and is best known for chilling suspense, trailblazing, and creating series that genre-blend. Her works include suspense, mystery and romance. Since 1994, this former VP of International Thriller Writers has written heavily about military and military families and in nearly all genres except horror. Hinze is a Floridian married to a former Hurricane Hunter/Special Operations Officer. She constantly pushes the boundaries on existing genres, opening the door for new novel blends.