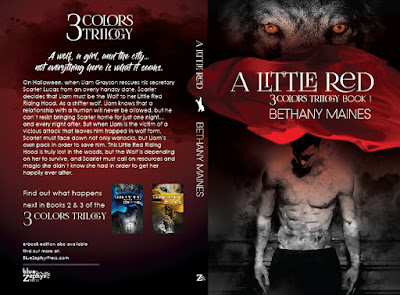 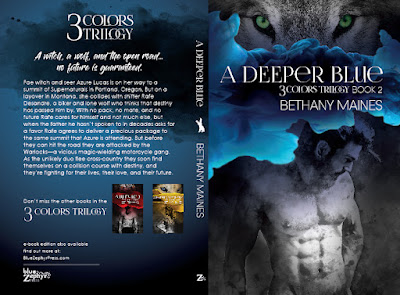 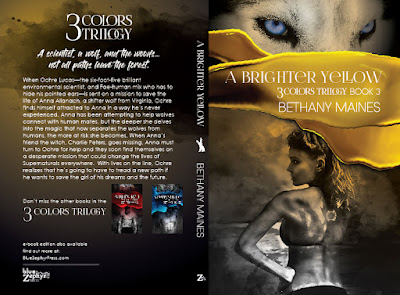 Titles: A Little Red, A Deeper Blue and A Brighter Yellow

Scarlet Lucas arrived in the big city determined to use her MBA to change the world for the better, but New York City is full up on small town girls with big dreams, and Scarlet is forced to take work as a secretary for the ferociously attractive and mysterious Liam Grayson. On Halloween, when Liam rescues Scarlet from an overly handsy date, Scarlet decides that Liam must be the Wolf to her Little Red Riding Hood. As a shifter wolf, Liam knows that a relationship with a human is the last thing his pack would ever allow, but Scarlet in an itty-bitty red hood is just too tempting and he can’t resist bringing her home for just one night… and the night after… and the night after that. As Liam and Scarlet grow closer, threats from their families, warlocks and their own employer have them questioning whether or not their relationship is meant to be. Before Liam and Scarlet can share their truths, Liam is the victim of a vicious attack that leaves him trapped in wolf form. Now Scarlet must face down not only warlocks, but Liam’s own pack in order to save him. This Little Red Riding Hood is truly lost in the woods, but the Wolf is depending on her to survive, and Scarlet must call on resources and magic she didn’t know she had in order to get her happily ever after.

Fae witch and seer Azure Lucas is on her way to a summit of shifters and magic-wielders in Portland, Oregon at her family’s insistence. She doesn’t think anything will come of it—the Supernaturals are notoriously independent and uncooperative, even when the fate of the world is on the line. But on a layover in Montana Azure collides with shifter Rafe DeSandre. A biker and lone wolf who thinks that destiny has passed him by, Rafe has no pack, no mate, and no future—he cares for himself and not much else. Yet, when the father he hasn’t spoken to in decades asks for a favor, Rafe agrees to deliver a precious package to the same summit that Azure is attending. Before the unlikely duo can hit the road, they are attacked by the Warlocks—a vicious magic-wielding motorcycle gang. As the pair flee cross-country they soon find that they might be more alike than they thought and the witch who likes to plan everything and the wolf who likes to wing it might just be perfect for each other. But as Azure and Rafe prepare to battle the evil Warlocks, Azure realizes that while she and Rafe might be destined for each other, she can see that destiny might not include survival. Azure is on a collision course with fate, and she’s fighting for her life, her love, and her future.

Ochre Lucas ought to stand out—he’s a brilliant environmental scientist, six-foot-five, and Fae-human mix who has to hide his pointed ears—but compared to his sisters Scarlet and Azure, Ochre has always felt lost and overlooked. But when Azure sends Ochre on a mission to save the life of Anna Allanach, a shifter wolf from Virginia, Ochre finds himself attracted to Anna in a way that makes him willing to risk everything for her to notice him. Years earlier, Anna Allanach received a reading from a fortune teller that said the path to true love lay with Liam Grayson and she believed it… right up until the day that Scarlet Lucas, Ochre’s younger sister, became Liam’s mate. Since then, Anna has been on a mission to help wolves connect with human mates, but the deeper she delves into the magic that now separates the wolves from humans, the more at risk she becomes. Anna only trusts her friend the witch, Charlie Peters, but when Charlie goes missing, Anna must turn to Ochre for help. Ochre and Anna hunt for Charlie, but soon find themselves on a desperate mission  that could change the lives of Supernaturals everywhere. With lives on the line, Ochre realizes that he’s going to have to tread a new path if he wants to save the girl of his dreams and the future.

Bethany Maines, a native of Tacoma WA, is the award-winning author of romantic action-adventure tales that focus on women who know when to apply lipstick and when to apply a foot to someone’s hind end. When she’s not traveling to exotic lands, or kicking some serious butt with her black belt in karate, she can be found chasing after her daughter, or glued to the computer working on her next novel. You can also catch up with her on Twitter, Facebook, Instagram, and BookBub.