Bite Me for Christmas by Megan Slayer Book Blast 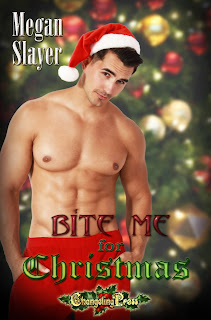 He came to her in a dream, but he’s more like a nightmare in tight jeans, and she wants a taste.

Rachael isn’t good at magic, and she’s not versed in life, but this witch wants to lay her hands on the sexy vampire who’s come to her in her dreams. Can she have her Christmas wish -- the vampire?

Gavin wants the witch, but he doesn’t believe he’s worthy of her. Part of him wants to devour her magic and save himself, but what if being saved doesn’t involve dying?

Anything is possible with a little Christmas magic.

Rachael admired the twinkle lights she’d strung around the kitchen. Somewhere people were enjoying themselves. They might even be making love under the Christmas tree. She’d like to try that -- sex in front of the tree.

Instead, she’d pulled the chore of kitchen clean-up. She always pulled that chore and the rest, too.

She draped the washcloth over the faucet and surveyed the room. Everything appeared to be back in place.

When she peeked into the living room, Serena and Millie were deep in another round of cards. The last Rachael knew, they were playing hearts. Rachael tiptoed out to the back porch to admire the snow. The cauldron bubbled with some batch of potions. She had no idea what her sisters made, only that she had to clean out the pot when they finished. The tangy smell filled the enclosed space and made her dizzy.

She crinkled her nose. If she knew how, she’d change the scent to something nutmeg-y or pine -- anything but the overwhelming aroma.

Something flashed among the white snow. She folded her arms and stepped up to the screened-in windows. Maybe the flash was the play of firelight on the snow.

The snow glittered and mesmerized her as it fell -- that had to be it. The flash was falling snow.

She hummed the tune of a Christmas carol and fought back tears. Christmas shouldn’t be this depressing, but she couldn’t help herself. She tried to make the day bright, but Christmas Eve would forever be the day her parents died and her world turned upside down. The loss turned her sisters bitter, too. The official account said nothing about her being at fault, but her sisters swore she’d created the fog, which caused the collision.

She wished she knew the truth.

One day, she wanted to know, but she also wanted to replace the sad memories with good ones. She’d never forget her parents, but she needed to move forward with her life.

The flash returned, but this time, a man appeared among the snow.

Her blood sizzled, and she gasped. She knew this man.

She longed to touch him, but feared she’d draw her sisters’ attention. 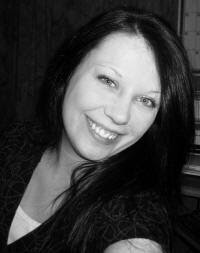