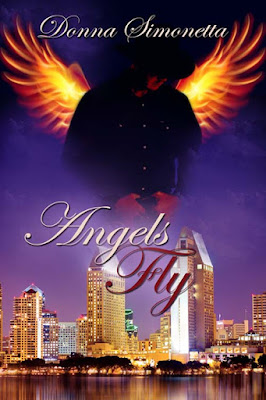 Two years after her husband’s death, Kelly believes her romantic life is done. Until she reconnects with her girlhood crush on social media, and as fate would have it, he lives across the street.

James is over the whole true-love thing. His grasping ex-wife tore that belief out of him, when she left him for a rich, old man. Then he finds out his first love moved to San Diego too, and their attraction burns as hot as ever.

What they don’t know is that Fate didn’t bring them together – the Guardian Angel Corps did, led by two unlikely Cupids – Kelly’s late husband and Zane, a rough and tumble, 19th century cowboy. When a Fallen Angel decides to tear Kelly and James apart, cherubs and harps aren’t going to cut it, and Zane’s unique skills might be just what they need to get a second chance at their first love.

James held Kelly’s hand as he walked her to her apartment building from his car. While they were still in shadows, before they reached the bright light of the entrance, James stopped and turned to face Kelly. He cupped her face in one of his big, rough hands and rested the other lightly on her waist. He traced her cheekbone with a feather light touch of his thumb, and Kelly couldn’t help but turn her face into his hand like a kitten. She did manage to stop herself before she purred, and was pretty darned proud of that achievement.

She felt his hand at her waist tighten, and he dropped his forehead down to rest against hers. When he spoke his voice was low and gruff with emotion.

“Tell me to leave right now, Kel, or all my good intentions to go slow this time are flying out the window, and I’m going to ask you to invite me up to your condo.”

Kelly’s voice was quiet. “I’m not ready for that yet.”

He left his forehead resting against hers, but rubbed his head slowly back and forth. “I know. I should just go, but I can’t bring myself to leave.”

Kelly swallowed, and extended an olive branch, since she wasn’t ready to call it a night yet either. “I think I’m ready for a kiss, though.”

He lifted his head away from hers, and the happiness and blatant hope in his voice made her smile. “Yeah? Really?”

“Yeah,” she replied and stood on the tips of her canvas deck shoes to bring her mouth closer to his.
James bent his head and pressed his lips gently to hers.

Her heart pounded and her blood heated in her veins. It had been such a long time since a man had kissed her—and this was James Flynn. Her first love. She snaked her arms up around his neck and pressed her body closer to his. 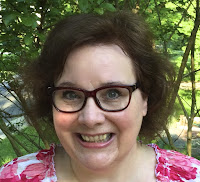 After years working in the business world, my love of reading led me to get my MLS, and I currently work part-time in a school library, a job that allows me lots of time to explore my other love - writing romance! I live in Maryland, with my husband, who is my real-life romance hero. We both enjoy traveling to visit our far-flung family and friends, and spending time on the beach with an umbrella drink and a good book.