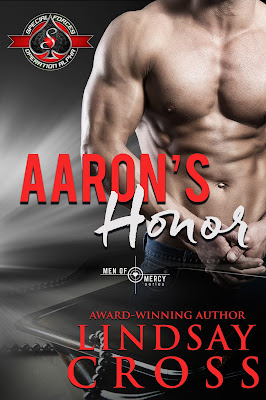 As a Special Forces operative, Aaron Spears treated relationships like Tangos. He’d seen the wreckage of his Task Force brothers' attempts and had no desire to put any woman through the hardship. He had one purpose – serve his country and protect his teammates. Then Celine Latimer walked into his life and turned his world upside down.

Celine Latimer thought she’d hit the jackpot when hunky SF operative Aaron Spears asked her to accompany him to the high-profile wedding of Senator Cotter’s daughter. They’d get to spend two weeks together while Aaron pulled guard duty for Caroline Cotter and Celine intended to use every spare minute, seducing the man she’d had a crush on for over a year.

The time and place proved to be more of a barrier than either of them realized. With his commander watching his every move, Aaron couldn’t afford to show any weakness. That meant ignoring Celine.

Rejected and hurt, Celine packed to leave only to be caught in a kidnapping plot against the Senator. Here she sat, in a hut in the Middle East, waiting on a rescue that may never come.

He'd sworn to protect and he'd failed. Now Aaron lived for one purpose- to rescue the woman he lost before she’s sold into slavery and spend the rest of his life making her see how much he loves her.

The Afghanistan desert would have made the devil himself sweat, not that the devil was brave enough to set up headquarters in this godforsaken land. Only the United States Special Forces would be smart enough to pick the meanest valley in the middle east as its home away from home.

Even the insects were AWOL. The only creatures crawling across the sand were the death dealers – scorpions, snakes and Special Forces.

Operative Aaron Spears, assistant medical sergeant and weapons expert, bent over and gripped the metal bar in front of him, working on his fourth set of dead lifts in the spotted shade provided by the camo net over Task Force Scorpions, TF-S, camp.

Up, down. Three hundred ninety-five pounds, nearly twice his bodyweight, an extreme amount guaranteed to give him arthritis by retirement – but he wasn't worried about that since most men in the Teams didn't live to see their fiftieth birthday. Sweat ran in rivulets down his shirtless chest, dropped to the scorched earth with a sizzle and evaporated instantly.

Up. Down. One more round of lifts and he might fall out from weariness, which was exactly what he intended. He couldn't stop thinking about Celine Latimer with her perfect platinum hair and sinful sweet personality. He couldn’t forget the taste of her strawberry flavored lip gloss or the fact that it was his fault she’d been kidnapped.

Up. Down. Another lift. Aaron's exhausted muscles screamed in protest but he kept moving, ignoring the pain.

Why hadn't he taken her in his arms and devoured her whole instead of turning her away?

“Dammit, Spears, never seen you lift that heavy. You need to ease up, give yourself a break.” Ethan Slade, communications sergeant and best friend, strained under the weight of his bench press five feet away. Ethan racked his weight and sat up, yanking a towel from a nearby chair to mop up the moisture on his face.

“You gotta have some faith, man. We’ll find them. We’ve already narrowed their location down to this area of the desert.”

“You mean this hundred square mile radius of ISA loyalists? And what about Mr. J? He’s here too. He works for ISA. He wants nothing more than to make us pay.” The Islamic State of Afghanistan, the lead terrorist organization in the world, responsible for kidnapping Caroline Cotter from her wedding to a very high profile general. The whole thing had been orchestrated by Mr. J, Task Force Scorpions former CIA liaison turned traitor. Celine Latimer had been collateral damage.

“It should never have gone down like that. The whole time I was thinking it was a cake mission, how hard could it be to pull security at Caroline’s wedding anyway? I got soft, complacent. I should never have taken Senator Cotter’s word that he’d fully vetted his own staff.”

Up. Down, the barbell bowed under the heavyweights stacked onto the ends every time he lifted. He was going to make Celine's kidnapper bend like that, right before he snapped the bastards in half.

“You’re right, we knew better, but we both trusted the Senator. It was his fuck up, too, and his daughter that was kidnapped because of it,” Ethan said.

“Not just Caroline. Celine was kidnapped, too. Don’t forget her,” Aaron ground out, jaw clenched under the pressure of holding up the extreme weight and guilt.

“Don’t forget my girlfriend, Kate, was almost taken. Don’t talk like I don’t understand, man. We nearly lost all of them.”

“I’m not, I just- I was the reason for Celine being there in the first place,” Aaron said.

“Yeah, so what? You invited her because you already knew her, you’d vetted her and we needed someone we could trust. Someone who could be close to Caroline that we wouldn’t have to worry about. You were just doing your job.”

Oh, he did his job alright, he fully vetted Celine Latimer, but not as a stylist for the bride.

He wanted her. He’d wanted her for nearly a year. He’d wanted her so bad he forgotten the cardinal rule – no relationships in the special forces. Not that he enjoyed one night stands or even the occasional short-term hook up, but he wasn’t about to put a girl through the shit of being in a relationship with a man that was never there, or one that may never come home from a mission. He’d seen the toll it took on his buddie’s wives – no way he would do that to a female. If he couldn’t fully commit to a relationship, he wouldn’t do it at all. “If you say so, man.”

He wasn’t in the mood to talk about it anymore. Aaron dropped the heavy-metal bar with a satisfying loud clank onto the concrete at his feet.

Ethan wiped the sweat from his face and dropped the soaked hand towel on a nearby metal chair. Their workout facility had the necessities. Water enough so they wouldn’t pass out from dehydration. Weights heavy enough guaranteed to work off the steam. All the outdoor circulation the desert could provide.

Aaron and the rest of his team had been here for two weeks, searching and pulling recon non-stop. They'd tapped all their contacts in the area, searched satellite photographs and even done some door-to-door searches only to come up with nothing. Not even a blip. It was as if the two girls had vanished.

Lindsay Cross is the award-winning author of the Men of Mercy series. She is the fun loving mom of two beautiful daughters and one precocious Great Dane. Lindsay is happily married to the man of her dreams – a soldier and veteran. During one of her husband’s deployments from home, writing became her escape and motivation.

An avid reader since childhood, reading and writing is in her blood. After years of reading, she discovered her true passion – writing. Her alpha military men are damaged, drop-dead gorgeous and determined to win the heart of the woman of their dreams.