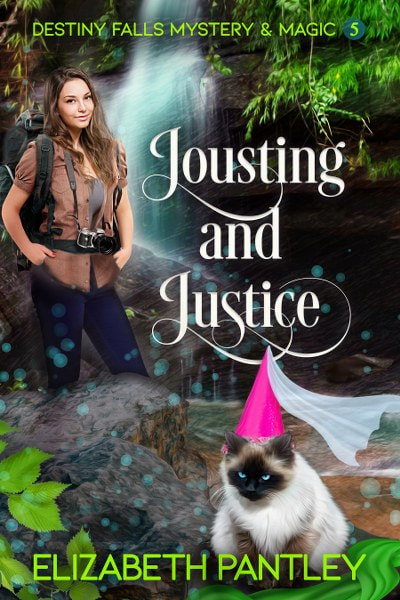 An invitation to a medieval festival. A ferry ride to a mysterious island. A scheming, inept witch. An office break-in, an unidentified body, and a string of suspects. Can Hayden, her brave, sassy cat, Latifa, and the people of Destiny Falls solve the mystery and enjoy the festival?

Jousting and Justice follows the series format of combining two stories that blend into one. A murder mystery and the island mystery.

The Island Mystery: Hayden and all her friends get an invitation to a medieval festival - but it's on "the forbidden island." It's too enticing to pass up. Of course, strange things will happen once they get there! . . . You'll also learn the truth about the witch's sister!

The Murder Mystery: A dead body shows up in the most shocking place. First, they need to figure out who this dead guy is. Then, who killed him and why. There are so many twists and turns on the way to the answers! But we know that Hayden, Latifa, and their family and friends will figure it out and justice will be served.

Hayden’s many adventures in Destiny Falls will keep you guessing with each book in this intriguing series.

Reviews for Jousting and Justice:

“Just when I think the series cannot get any better, it does. It was absolutely magical! I could not put this book down!” ~ Goodreads

“If there were more than five stars I would definitely give more! In this case it’s at least 10 stars worth double the wonderful! Destiny Falls is a location you cannot miss visiting, experiencing, enjoying, and pondering!” ~ Goodreads

“An ongoing series which I eagerly await each new release. Full of wonderful characters, mystery, humor, and a mischievous cat. It’s an adventurous mystery series written with cleaver imagination.” ~ Goodreads

“Solidly at the top of my list for paranormal mysteries! Just when I think the series cannot get any better, it does.” ~ Goodreads 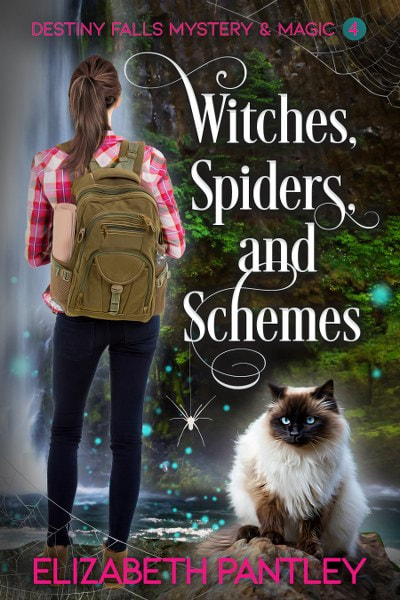 A magic mirror to an enchanted world. A mysterious ghost. A hilarious, perpetually annoyed witch. A brave, sassy cat. Two unexplained deaths and a mysterious community filled with secrets. Can Hayden and the people of Destiny Falls solve the mystery and return the community to its peaceful, enchanted existence?

Hayden’s adventures in Destiny Falls continue in book four of the Destiny Falls Mystery & Magic series. Starting with a strange old woman at a cave and her father’s mysterious ferry journey, there are secrets to be unwound.

The enchantments in Destiny Falls are showing cracks, and Hayden suspects that it’s tied directly to her family, which has a history that’s more complex than she realized. When two bodies are found floating in the bay it’s clear that the mysteries surrounding Gladstone and the ferry are more dangerous than people realize.

Luckily, Hayden and her sassy sidekick, Latifa have developed a group of family and friends in this enchanted place who are all ready and willing to help solve the mystery, and release Destiny Falls to resume its normal, amazing, enchanted existence.

Hayden’s many adventures in Destiny Falls will keep you guessing with each book in this intriguing series. 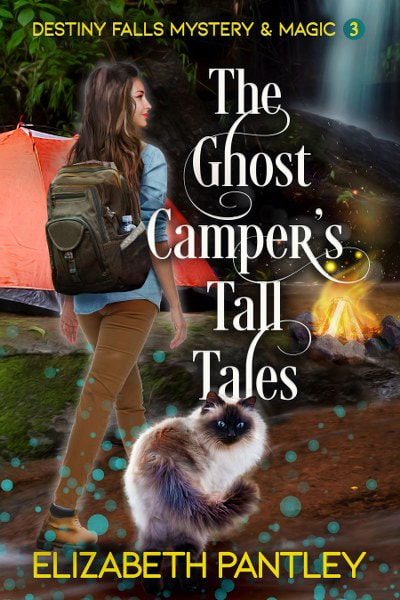 A mysterious old man keeps popping up to tell Hayden a series of tall tales. Who is he? And is he actually glowing? Are his stories fiction, or is he telling her the history of her family, the enchanted islands, and the witch? And why did a dead body show up . . . of someone who is already dead? Can Hayden and her quirky sidekick, Latifa unscramble this mystery before someone else shows up dead?

Hayden’s adventures in the magical world of Destiny Falls continue in this gripping story that answers your questions about the mysterious world she entered through a mirror in book one, Falling into Magic. We learn more about her missing mother, whose story begins in book two, The Disappearance of Emily.

The Disappearance of Emily

Hayden fell through a mirror and was thrust into an alternate, magical place. Destiny Falls is not on any map and is home to a family she never knew she had. The town is enchanted and charming, but something is amiss. She gets an ominous warning, and the promise of a package. Once it arrives, someone turns up dead and there are too many other suspicious episodes to call them coincidences. All signs point to the mysterious disappearance of her mother - way back when Hayden was just two days old. Can she identify and eliminate the threat before another person in her life is stolen away?

When Hayden was a child, she lost her cat. Adults told her the cat ran away, but she knew the truth. The mirror had taken her.

She knew because the mirror had given her a glimpse of an alternate world and had nearly pulled her in, so she was certain the cat had suffered that fate.

Twenty years later Hayden discovers the secret of the mirror when she is thrust into it. She learns of a world she never knew existed, and a family she never knew she had.

But danger brought her here, and it followed her. Now, Hayden is on a mission to remove the threat, so that she can begin her magical, meaningful new life in this enchanted world.

"A magical, delightful tale that held my attention with a quirky cast of characters, engaging dialogue, a pleasantly appealing universe, and an intriguing plotline that I could not put down. I can’t wait to see where we go with Hayden’s next adventure." — Dru Ann, MWA Raven Award winner, www.drusbookmusing.com

“What a captivating read! . . . I couldn't put it down. A great story, full of interesting people and places to get to know, with surprises around every corner.” — Linda C. Goodreads reviewer

“The world-building and magic system is fascinating. Destiny Falls is a wondrous place that seems to cater to citizens’ wants and needs. I love that it is almost a character in its own right, and I was intrigued by the constantly changing world. Vivid imagery paints a clear picture of Destiny falls and its inhabitants. Falling into Magic is a dynamic introduction to the Destiny Falls Mystery & Magic series.” — Julie Petitbon www.onebookmore.com/

“Finally! An author who manages to pin the Disney/Hallmark magic down on paper.” - Mareli & Elza, https://elzareads.blogspot.com/

“This is no run-of-the-mill paranormal book! Unique ideas. You will be glad this is a series!” – Susan G., Amazon reviewer 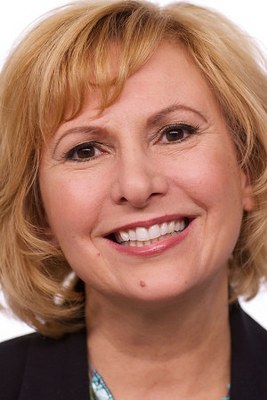 Elizabeth Pantley is the international bestselling author of The No-Cry Sleep Solution and thirteen other books for parents. She is also the author of The Destiny Falls Mystery and Magic book series. Her books have been published in over twenty languages. She lives in the Pacific Northwest and is the mother of four and Nana to one.