Review of The Mortician's Daughter Two Feet Under by C.C. Hunter 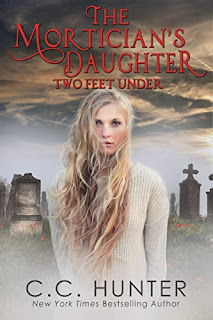 Riley has accepted that her special gift is to help dead people with their unfinished business. But she never thought she’d be tasked with helping the spirit of a convicted criminal who died in prison. He may lead her on the scariest mission yet, but helping him could mean saving the life of a child. The convict’s daughter needs a liver transplant and the one person who could still be a match is his brother . . . who also happens to be a gang leader.

Hayden’s not happy that Riley’s discovered who he is and is seeing him sick and unconscious in his hospital bed. This feels like as good a time as ever to cross over and put all of them out of their misery . . . but Riley is in danger. She’s visiting some of the most dangerous spots and confronting some of the creepiest lowlifes in town. For her, he’ll need to regain his strength and fight to keep her safe.

But dealing with other people’s problems still can’t keep Riley from her own. Her dad’s drinking has gotten worse. And she’ll soon learn it’s because he’s been keeping a huge, horrible secret that will change everything she believes about her family and her mother’s death.

THE MORTICIAN'S DAUGHTER TWO FEET UNDER IS BOOK TWO IN THE SERIES.  IT CONTINUES WHERE THE FIRST BOOK LEFT OFF.  C.C. HUNTER HAS WROTE AN EXCELLENT SERIES WITH EXCELLENT CHARACTERS AND A GREAT STORY LINE.  I WAS DRAWN INTO RILEY AND HAYDEN'S STORY FROM THE VERY FIRST BOOK.    THE MORTICIAN'S DAUGHTER TWO FEET UNDER DID NOT DISAPPOINT ME.  IT CONTINUED WHERE THE FIRST BOOK LEFT OFF AND ONCE AGAIN I WAS DRAWN INTO THE LIFE OF RILEY.  RILEY HAS A SPECIAL GIFT THAT IS A CURSE AND A BLESSING.  RILEY LOVES AND HATES HER GIFT.  SHE LOVES BEING ABLE TO HELP PEOPLE BUT DOESN'T LIKE THE CONSTANT DANGER AND GHOSTS JUST SHOWING UP.  RILEY'S HOME LIFE IS NOT MUCH BETTER WITH HER FATHER'S CONSTANT DRINKING.   I REALLY LOVE RILEY.  SHE TRULY IS SPECIAL BUT SHE EXPERIENCES A LOT OF HEARTACHE AND SADNESS THROUGH THIS BOOK.  THERE IS CONSTANT ACTION AND DANGER THROUGHOUT THE STORY AND SECRETS ARE REVEALED.    HAYDEN AND RILEY'S ROMANCE IS SO SPECIAL AND THEY HAVE CONNECTED ON SO MANY LEVELS.  BUT WILL THEY TRULY BE TOGETHER?

THE MORTICIAN'S DAUGHTER TWO FEET UNDER IS A FAST PACED READ WHICH THE AUTHOR DRAWS YOU INTO THE LIFE OF RILEY.  C.C. HUNTER HAS CREATED SUCH AMAZING CHARACTERS AND REALLY WONDERFUL STORY LINE.  I REALLY ENJOY THIS SERIES.  I ESPECIALLY LOVE RILEY AND HAYDEN TOGETHER.  THEIR RELATIONSHIP IS SPECIAL AND UNIQUE IN EVERY WAY.  YOU CAN FEEL ALL THE CHARACTERS CONNECTIONS AND THEIR PAIN.  THIS SERIES IS A DEFINITE MUST READ.  IF YOU ARE LOOKING FOR A GREAT PARANORMAL ROMANCE THAT WILL LEAVE YOU WANTING MORE, I RECOMMEND THE MORTICIAN'S DAUGHTER SERIES. I AM REALLY LOOKING FORWARD TO THE NEXT BOOK IN THE SERIES.  5 STARS 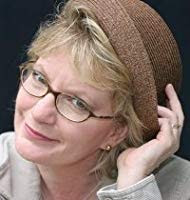 C.C. grew up in Alabama, where she caught lightning bugs, ran barefoot, and regularly rescued potential princes, in the form of Alabama bullfrogs, from her brothers. Today, she's still fascinated with lightning bugs, mostly wears shoes, but has turned her focus to rescuing mammals. She now lives in Texas with her four rescued cats, one dog, and a prince of a husband, who for the record, is so not a frog. When she's not writing, she's reading, spending time with her family, or is shooting things-with a camera, not a gun.

C.C. would love to hear from you. Because of deadlines, it may take her a day or so to get back with you, but she will reply. cc@cchunterbooks.com
Posted by Girl with Pen at 6:00 AM