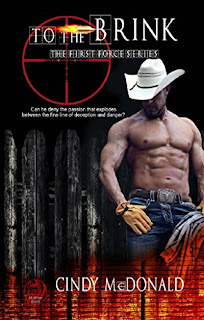 Tess thought her life would settle after the death of her husband, Ballard Crafton. After all she’d escaped Russia with the formula to his secret serum that transforms ordinary soldiers into unstoppable machines. She was certain the Russians thought Ballard’s notes were lost in the explosion that destroyed his lab, but one man believes that Tess possesses the precious information, and he wants it for his own wicked agenda.
Hired assailants dog her night and day. She needs help and she needed it weeks ago. Now she turns to First Force for protection only to find the team is away with only one operative at First Force headquarters holding down the fort—Dan Garrison.
How can Dan keep her safe when he isn’t sure that he believes her story? How can Tess gain his trust, and how can either of them deny the underlying passion that is exploding between the fine line of deception and danger?

THE FIRST FORCE SERIES IS ONE OF MY FAVORITE SERIES. I CAN NOT GET ENOUGH OF IT.  I ABSOLUTELY LOVE ALL THE CHARACTERS IN THIS SERIES. TO THE BRINK WAS NO EXCEPTION.  IN THIS BOOK, WE ARE TOLD TESS AND DAN'S STORY.  TESS WAS BALLARD CRAFTON'S WIFE WHO WAS KILLED BY FIRST FORCE.  BALLARD DID NOT TREAT TESS REALLY WELL AT ALL.  SHE MISSED OUT ON A LOT OF THINGS IN LIFE.  TESS THOUGHT THINGS WOULD SETTLE AFTER HER HUSBAND'S DEATH BUT SHE WAS WRONG.  TESS KEPT BALLARD'S NOTES TO THE SECRET FORMULA THAT TRANSFORMS ORDINARY SOLDIERS INTO UNSTOPPABLE MACHINES WHICH BALLARD'S BROTHER WANTS.  BALLARD'S BROTHER WILL STOP AT NOTHING TO POSSESS THE NOTES FOR THE SERUM.  TESS TURNS TO FIRST FORCE FOR HELP.

DAN DOES NOT BELIEVE TESS AT FIRST BUT THEN HE CHANGES HIS MIND AND BEGINS TO TRUST HER.  DAN IS AFRAID TO GET CLOSE TO ANYONE SINCE LOSING HIS WIFE.  BUT HE FINDS HIMSELF FALLING IN LOVE WITH TESS THE MORE TIME THEY SPEND TOGETHER.  WILL DAN BE ABLE TO PROTECT TESS?

DAN AND TESS ARE SO PERFECT FOR ONE ANOTHER AND I LOVE HOW THEY ARE BROUGHT TOGETHER.  TO THE BRINK IS FILLED WITH LOTS OF ACTION, SUSPENSE AND ROMANCE.  I RECOMMEND YOU READ THE FIRST FORCE SERIES IN ODER TO GET THE FULL EFFECT AND STORY.

IF YOU HAVE NOT READ THE FIRST FORCE SERIES, YOU DO NOT KNOW WHAT YOU ARE MISSING.  CINDY HAS CREATED THE PERFECT SERIES WITH SO MANY UNIQUE AND COMPLEX CHARACTERS.  THE FIRST FORCE SERIES HAS SO MUCH ACTION, SUSPENSE, AND ROMANCE.  CINDY KEEPS YOU GUESSING WHAT IS GOING TO HAPPEN TO THE VERY END.  I LOVE HER WRITING AND HOW SHE DRAWS YOU INTO THIS WONDERFUL STORY.  ALL THE CHARACTERS ARE SO VERY CLOSE AND FEEL LIKE FAMILY.  YOU MUST PICK UP THIS SERIES.  I CAN'T WAIT TO READ THE NEXT BOOK IN THIS SERIES. 5 STARS 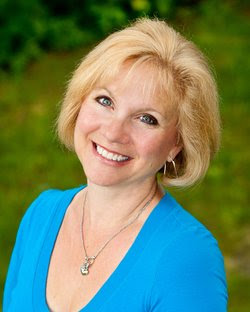 Biography
For 26 years Cindy's life whirled around a song and a dance--she was a professional choreographer. She taught ballet, jazz, and tap. During that time she choreographed many musicals and an opera for the Pittsburgh Savoyards. Most recently, she has retired to write her novels. She resides with her husband and Cocker Spaniel, Allister, on their Thoroughbred farm know as Fly By Night Stables near Pittsburgh. To learn more about all of Ms. McDonald's book series' and to read excerpts from her upcoming books, please visit her website: www.cindymcwriter.com
You can also find out about her cozy mystery series, Fiona Quinn Mysteries, and her children's books under her pen name, C.S. McDonald. Here's that website: www.csmcdonaldbooks.com Check it out!
Posted by Girl with Pen at 6:00 AM