MIDNIGHT ANGEL
by Tracey A Wood 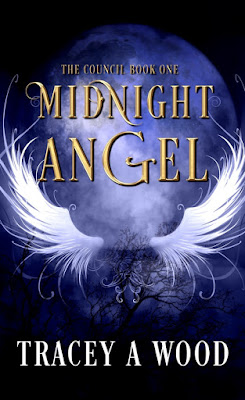 After almost losing her life in a vicious and bloody attack, Kat Shaw, a thirty-something divorcee, discovers that there are such things as monsters. And the predator who attacked her is not human. As she starts to develop unusual skills which have murderous consequences she is an unwilling witness to multiple brutal murders, seen through the eyes a killer. Thrown into a battle of Good vs. Evil, she falls in love with two men who are not what they seem. While her attacker stalks her and continues to murder the innocent, she has to find the inner strength to take on and fight the demons from hell to protect her family and friends while also trying to save her own life.

She is also drawn into a strange love triangle, between heaven and hell. 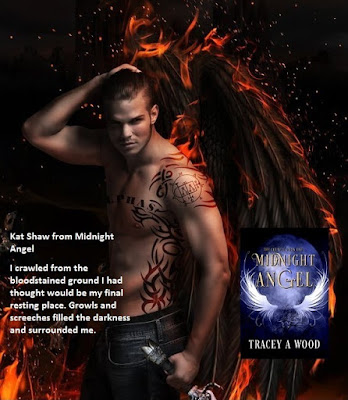 I had set my alarm clock so I could get up early in the morning, to head off to the cottage. Turning off the light and lying down, I snuggled under the covers.

I was just nodding off when I heard ringing. I hit the alarm clock, but the noise didn’t stop. Blinking, it dawned on me that it wasn’t the clock, it was the phone. I jumped up and answered it before the machine did.

“Kat?” the voice on the other end said.

“Yes?” I didn’t recognize the voice. Who would be calling at this time of night?

What does he want?

“I was wondering, do you want to go out on Monday evening?”

He went quiet, then asked, “Why not?”

As the words left my mouth, I realized I shouldn’t have said them. I should have thought of something better. I didn’t know what else to say.

“Oh, so that’s it? You don’t want to see me again, do you?” I could hear the attitude in his voice.

“No. I think we should call it a day.” The phone went quiet.

“That’s about right, you bitch!”

“You lead me on and then dump me, you whore.”

I couldn’t believe what I was hearing. My God, where was the caring man from earlier? The one who had given me his jacket.

I slammed the phone down. As I did, I could hear him shouting and swearing at me. I couldn’t believe my ears.

Wow! I certainly had a narrow escape with him. I’m glad I didn’t tell him in person.

I was angry, annoyed that I hadn’t retaliated.

He was so nice. Who would have thought he could turn so nasty? Just wait until I get my hands on Jonathan. I’ll wring his bloody neck. What was he thinking, introducing me to a lunatic?

I made sure all the windows and doors were locked and finally went to bed.

I dreamt about the man on the rock. It was different this time.

The nameless vision of masculine beauty watched the water bubble and swirl as it flowed past him. He turned his head in my direction and smiled. There was something wrong with his eyes. They were not the beautiful blue eyes I loved so much. They were yellow! He glanced back at the stream and my gaze followed his. I looked back to where he stood and took a step forward. He wasn’t there! My heart sank.


Where had he gone?


I scanned the area but he was nowhere to be seen. I heard a noise above me and saw a large bird flying high in the sky. It swooped toward the stream and took off into the woods. Where did he go? He was there one minute and gone the next. I had just plucked the courage up to speak to him and he’d disappeared. 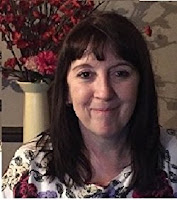 Tracey A Wood has lives in Staffordshire, in the United Kingdom. She has been married for over thirty years and has two children. One of her boys lives at home due to being disable the other has flown the coup. She has three cats that are her babies, and she talks to them all of the time. Funny thing is they don’t answer back.

She loves snowboarding, skiing, jumping out of aeroplanes and bungee jumping. Well, that is when other people are doing them. She prefers to have her nose in a book or writing one. She also loves to people watch which her husband is always telling her to stop doing. She has a job that she enjoys and works full time. Although if she won the lottery, that might change! She has also got a very good imagination.

In 2014, she decided to take the bull by the horns and send her manuscript to Soul Mate Publishing. She feels so privileged to have her book published, as this is the first one that she has written. It has made her dream of being a published author a reality. Life really is too short to wait, you’ve got to go for it. She is still working full time and is also working on another book in her limited spare time. Her favourite saying is ‘Everything happens for a reason’ which she also believes is true.

Her books are fast paced and centered on a female lead who finds an inner strength after being thrown into situations that are beyond her control. 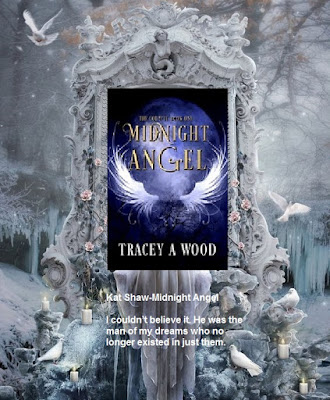