THE UNHOLY
by Paul DeBlassie III 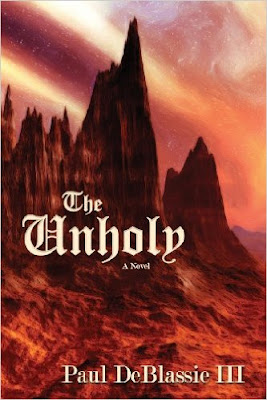 A young curandera, a medicine woman, intent on uncovering the secrets of her past is forced into a life-and-death battle against an evil Archbishop. Set in the mystic land of Aztlan, "The Unholy" is a novel of destiny as healer and slayer. Native lore of dreams and visions, shape changing, and natural magic work to spin a neo-gothic web in which sadness and mystery lure the unsuspecting into a twilight realm of discovery and decision.

“Hush now, child,” said a voice she recognized as that of her mother’s closest friend. “The man cannot harm you, mijita, as long as you are with us. We will make him think you are dead. But you must be very quiet. “Ya no llores,” the woman warned, raising a finger to her lips.

The woman then carried her into a dark cave illuminated by the light of a single candle. The cave was frightening, with shadows of what appeared to be goblins and demons dancing on the red sandstone walls. “I will return for you soon. You will be safe here,” the woman said. The girl watched the woman walk away, shivering as a breeze blew through the cave’s narrow passages.

Closing her eyes, she rocked back and forth—imagining herself safe in her mother’s arms—then opened her eyes to the light of the full moon shining through the mouth of the cave. The shadows on the walls were just shadows now, no longer goblins and demons. As she slipped into a trance, images flickered in her mind. She saw the woman who had brought her to this place scattering pieces of raw meat around the open mesa where her mother had struggled, helped by two other women the girl could not identify.

Suddenly, the scene shifted to a stone ledge jutting over the mesa, and she heard the pounding footsteps of a man running toward the women. The girl felt her heart race and her breathing quicken, afraid that the bad man would spot them and kill them. Then the image shifted again, and she now saw on the mesa three gray wolves circling the raw meat and the man walking away from the granite ledge. As he left, she heard his thought: The child is dead.

The story comes out of over thirty years of treating patients in psychotherapy who are survivors of the dark side of religion…have been used and abused and cast to the side. I’ve seen that when this happens people, those around the victim, to include family and friends, often turn a blind eye and deny what has happened. Rather than writing a self help book I decided to approach this realm of human suffering in fiction. To tell a story moves the reader into a deep and unconscious dimension that bypasses conscious defenses, leaving us open to truths that otherwise would be blocked. So, dramatizing the dark side of religion, pulling what can be the most vile and evil, and pivoting it against an innocent and sincerely searching soul leaves the reader on edge, hopeful, but unsure as to what will happen and who in the end will survive…a truth conveyed symbolically and dramatically. To have written out a list of what to do or not to do in the midst of religious abuse might have helped some individuals, but would have left many people stone cold because there is no emotion is such guidance. In The Unholy, the story is pure emotion, fear and rage and hope and challenge, that inspires and frightens and causes us to stay up late at night in order to finish the story. Dream and chronic nightmares plagues people who’ve gone through the horror of being abused within a religious system. It could be emotional, spiritual, physical, or sexual torment—or all of the above—a true encounter with the unholy—that people undergo during childhood or adolescence or adulthood.
Courtesy of The Story Behind The Book.

✯✯✯✯✯Good and evil collide in this amazing thriller By P.S. Winn
I enjoyed this thriller which to me is also a conspiracy novel about what lies behind the leaders of some churches. Claire lost her mother to what Claire knew were evil forces when Claire was five years old. Raised by Francesca, Claire is now the natural therapy and mental health specialist at a mental hospital in Aztlan. Claire's mom was a medicine woman and Claire is destined to follow in her mother's footsteps as the clash of good and evil begins in this well written and suspenseful novel. The author did a great job with the mood of this book and it is a definite page turner.

✯✯✯✯The Unholy by Paul DeBlassie III ByLoveBooks83
Paul DeBlassie's novel, The Unholy, begins in an unknown past. A young, unnamed girl watches a horrific event. On a dark night in the wild mountains, amongst the horror that she witnesses, there is magic in the night to protect her. The novel shifts to a contemporary scene and introduces Claire Sanchez, director of mental health workers at the Ecclesia Dei Psychiatric Hospital on the Aztlan Plaza.
The Unholy is a novel of haunted souls. Claire Sanchez is intelligent, insightful, difficult to know, and evading both her past and her future. She lives on the Aztlan Plaza at the base of the high-mountain desert, considered by natives to be the naval of the world. It is here in Aztlan that varying cultures come together, some blend, some resist, some conflict. Claire's past leaves her wary of the priests of the Ecclesia Dei. These are the men in black requiring complete obeisance and monetary salvation. The Ecclesia Dei is led by a cunning, sharp thinking, ruthless Archbishop Anarch. The Archbishop is a man of determination. He builds a holy empire within the Aztlan helping the poor but also living a luxuriant life on his holy rewards.
Claire's guardian, Francesca, is an Aztlan medicine woman, mestizas, like Claire's mother, Lucia, was. Francesca guides Claire and gives Claire grounding as the conflicting forces of Claire's life threaten to destroy her. Francesca is wise in the ancient teachings of the mestizas and waits patiently as Claire determines her destiny. It is Francesca who warns Claire that Archbishop Anarch is seeking information about her and begins to shows Claire a mystery surrounding the Ecclesia Dei.
The Unholy is an intriguing story melding together the mythology of Aztlan medicine women, the mystery of a past event with the contemporary work of a young mental health worker, and a secret surrounding the wealthy priestly order of Ecclesia Dei. Paul DeBlassie III has a keen eye for detail describing the characters and settings of his novel, The Unholy, with deft skill. This descriptive imagery is also at times a downside to the novel as the descriptions of every detail removes the reader from the immediacy of the building action. These scenes resolve themselves as the story continues leading deeper into the story and the reasons behind the mystery.

PAUL DeBLASSIE III, PhD, is a psychologist and writer living in his native New Mexico. A member of the Depth Psychology Alliance, the Transpersonal Psychology Association, and the International Association for Relational Psychoanalysis and Psychotherapy, he has for over thirty years treated survivors of the dark side of religion.