ARABIAN NIGHTS & ARABIAN NIGHTS
Tradional Tales from a Thousand and One Nights, Contemporary Tales for Adults
by Clive Johnson

Genre: Fictional Short Stories & Fictional Fairy Tales
Content warning: the book is aimed at adult readers. One or two stories contain references to love scenes (limited and not explicit); one chapter refers to brutal treatments suffered in one of Sadam's prisons, but is not graphically explicit. 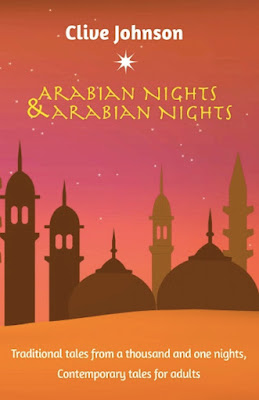 Classic tales from the Arabian Nights retold alongside modern interpretations.

Magic carpets and flying horses, caverns glittering with gold, unexpected plotlines following the fortunes of heroes and villains–who cannot fail to be enchanted by the magic and wonder of the tales of the One Thousand and One Nights?

This most celebrated collections of tales feature shape-shifting and miraculous transportation across continents, powerful jinn who rise like smoke from simple vessels, dreams that delve into the secrets of the subconscious, and gigantic, man-carrying birds.

The backdrop for the tales moves from barren deserts to spectacular cities, from the edge of the world to the inner sanctuaries of mighty rulers. Kings and paupers, benevolent sages and devious magicians, worthy princesses and unscrupulous harlots–all play their part in teaching important truths and providing lively entertainment.

This innovative book offers retellings of a selection of tales that have captured the imaginations of countless people over many centuries. Accompanying each is a short story set in a contemporary context, which reframes the messages and teachings of the original, specifically written for an adult audience.

Here are stories of betrayal and murder, exploitation and sibling rivalry, soul-searching and discovery. The modern parallel tales swap the busy alleyways of old Baghdad for the horror of Saddam's prisons, move from following caravans sweeping across the Sahara to modern day pilgrims trekking along the Caminos of northern Spain, and lift Aladdin out of his cave to unwittingly face Triad gangsters and antiques smugglers.

Wayward Baptist ministers, adulterous accountants, and eco-warrior backpackers follow in the footsteps of the no-less colourful characters than those that feature in the original tales.

Each pair of stories is accompanied by a commentary on how they might be interpreted. The result is a gripping collection of tales that may continue to bring the mystery and magic of the Nights to life, as well as provoking fresh thought and feeling for adult readers. Prepare to be surprised, uplifted and–in the spirit of the original Arabian Nights Entertainments–enthralled.

A journalist had picked up on the news of Todd’s arrest, and by some means had been able to identify him as a Baptist pastor. Soon, the news of my husband’s escapade with the prostitute had made not only the front page of the Louisville Courier-Journal, but had carried across the state to Lexington too. I dreaded to think what the decent people of our church would say when they saw the photograph of their pastor being paraded in front of a police identification plate.

When we returned to Lexington, most people seemed to want to avoid mentioning the topic. It was obvious to me that they had been deeply unsettled by Todd's indiscretion, but to our faces at least, they promised their love, assuring us that ours is a God of love, able to forgive every sinner–even a wayward minister.

Todd was not afraid to show his contrition before his flock. Were Oscars awarded for emotional outpouring by those in church ministry, Todd would surely be nominated for an award. Whether or not his tears were genuine I do not know, but he certainly gave a powerful example of how to show repentance when he took his place on the dais.

“O my Father, how I have failed you! How I have let these, my beloved brothers and sisters, down! Forgive me, for I am the worse among sinners!”

His cries and wailing knew no limit. Kneeling before the congregation, Todd accepted the prayers and blessings of the people. Two of the deacons laid hands on him, commanding the demons that were in him to depart.

Perhaps this display was good for our community. Other men in the congregation came forward to confess their infidelity, and to receive the forgiveness of the Lord Jesus and those of us who serve Him. In fact, I don't think that our church had for a long time felt so overcome by the love and warmth of The Holy Spirit.

The experience had certainly been a shock for Todd. He knew that his position as a pastor would be under threat were he to backslide again. More than anything, I think that he was genuinely aware that he’d been unfaithful to his Lord.

He had been unfaithful to me too, and privately I went through a period of hurt and suffering. But the fast pace of events, and Todd’s apparent regret for his actions, kept me focused on supporting my husband. 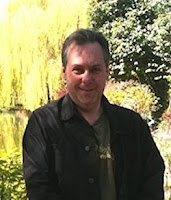 Arabian Nights & Arabian Nights is Clive Johnson’s seventh book, and the second in the series that takes old and often familiar tales and retells them alongside modern-day versions. Taking this approach, Clive says that he aims to recapture some of the magic and important messages that can be found in traditional fairytales, stories from mythology, etc, while inspiring fresh wonder among adult readers.

His earlier books were aimed at business readers, and he’s also edited an anthology of interfaith wisdom. Recently, Clive has also started narrating and producing audible audiobooks for other authors, which is an activity that he says he particularly enjoys.

Clive spends most of his time in the UK, where he was born, although he has no fixed home. This allows him to follow his heart from place to place, often house and pet sitting for friends and others who are taking a break away. He also often takes in or hosts retreats and workshops on various themes. Many house sits introduce him to some wonderful furry friends, and provide the perfect opportunity for settling into some serious writing!

Having an autistic condition and with a strong interest in mysticism, Clive likes to approach his work with a keen curiosity. He says that he enjoys researching and imagining a story almost as much as he does writing it.

Clive is an avid reader, and an ordained interfaith minister.


Please note: This giveaway is being run by the author and will only run from Oct 17-21