With a trail of murdered women leading up the west coast, Zoe Mack gets an unexpected invitation to work with the Federal Bureau of Investigation. Zoe’s arrival to the FBI is less than ideal, however, and she struggles to find her place on the team. Her new partner isn’t helping. Jeremiah Johnson makes it clear that he doesn’t want or need someone like her — someone with a past tied to their suspect.

She has personal knowledge about their killer, and accepts this chance to get her feet inside the door, even if that means working with her ex-partner Elijah Stone. A brutal attack tore them apart, their friendship still strained by pain and anger.

Zoe vows to close their case and end the reign of terror that has haunted her, even if that means she loses herself along the way.

“What’s so funny?” Zoe asked, knowing he’d heard everything said between the two of them thanks to the wire she was sporting.

“You just love antagonizing them, don’t you, Mack?”

“I do,” she admitted with a nod. “I’ll get the paperwork done in the morning, if that’s okay.”

Captain nodded. “I’ll see you first thing in the morning then.”

Zoe agreed with a tilt of her head and looked back over at Donald, who was being loaded into the backseat of a black and white, but her attention was pulled to the man leaning against the back the police car: Jax Shaw. He stared at her, a look of yearning on his face, a look she couldn’t return.

Once upon a time — and not that long ago — he’d been her comfort, her solace from a world that overwhelmed her. But not anymore, not after he betrayed her like many others in her life had. So, rather than allowing herself to let him hold her, she turned and walked in the other direction.

Twenty minutes later, and a stop at the corner market for a few groceries, including a nice, cheap bottle of wine, Zoe was trudging up the steps of the three story brownstone she had called home for the last six years.

As she dug her keys out of her purse, Zoe shifted her eyes to the small, two inch by three inch business card that had been taped to her door. In large, gold letters the words: Federal Bureau of Investigation. And below that was the name: Special Agent Elijah Stone. Beneath his name were his work number, his cell number, and three words that had been handwritten: I need you. 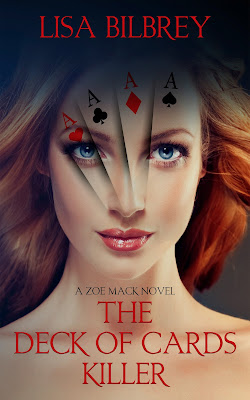 Obsessive, compulsive, slightly crazed, but enough about her personality. First and foremost, Lisa Bilbrey is a mom to three and a wife to one. She loves to write, and spends the majority of everyday writing. It's who she is, and what she's meant to be doing. Words are her life, the air she breathes, and the nutrients of her soul. Finding a love in the written word, Lisa Bilbrey started writing as a way to express herself and let her voice be heard. From the first word she wrote, she'd found her heart and soul.

Always willing to learn, she's spends much of her time trying to improve as a storyteller.