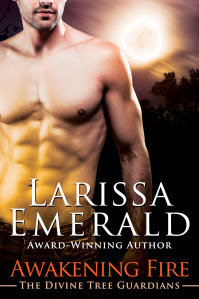 The return of sculptor Emma Grant to her Georgia home town sparks the return of the visions she tries to deny and rekindles a centuries-old feud between shape shifters Venn Hearst, guardian of the Divine Tree (The Tree Of Knowledge) and his nemesis. Emma is determined to place and dedicate the statue honoring her beloved grandmother despite Venn’s opposition; despite the fact she is in love with Venn, despite his sacred duty not to permit it. Will she overcome a test of evil or shatter Venn's world?

As Venn pelted across Aunt Fay’s parking lot, loose pebbles crunched beneath his feet. The Tyler streets were fairly deserted, with most people in bed by nine on a workday like today.

He paused to watch Emma through the store window, noting that Mrs. Grant had chosen to wait in the car with her dog. His anticipation mounted.

When he entered the shop, her scent grabbed him—plumeria and cinnamon—an instant turn-on. Even the heady aroma of coffee couldn't rob him of her sweet, luscious fragrance,a perfume he’d profoundly missed. He drew a deep breath as he stepped behind her in line and enjoyed the sound of her voice while she spoke into a cell phone.

Instantly, she seemed to sense him as she stopped mid-sentence and turned.

He smiled and couldn't help but flirt with her. “Something with whipped cream?”

She narrowed her eyes and angled her cell away from her ear with an incredulous nod. “Excuse me?”

“Oh.” Her cheeks flushed a pretty pink. “Yes. Umm, and your recommendation is?” She cleared her throat, her green eyes now glinting with pale fire, and then her brows pinched as if she were trying to recall something.

Was it possible she recalled him? That would make things so much easier. He was already finding it difficult to behave as though he didn't know her.

“Anything with chocolate,” he answered as his lupine senses went into overdrive. Her fragrance intensified, warmed, indicating to him that her body knew what her mind did not.

Her subconscious recognized him.

She gave her head a shake, confusion painted on her face. “Sorry. I . . .” She paused a beat, steeling her features, and then pointed to her phone.

Her voice drove him to the brink of desperation. He wanted to get her alone. He needed her to remember what they’d shared.

And his beasts concurred with a beat of wings and hammer of paws.

“Miss. What would you like?” the clerk behind the counter asked.

She faced forward again, leaving him to stare at her long, sleek, shimmering hair. He’d kill to slide his fingers through those rich strands.

“For some reason I’m craving something I haven’t had before.” Her voice was soft and sweet. “A mocha latte. And forget the calories. Add on some extra whipped cream.”

He swallowed. He had cravings, too, ones he hadn't given in to for a very long time. “Good choice,” he said to her back.

Now to convince her of a few other things . . .

Hell, she’d fallen for him before, she would again. Larissa Emerald writes paranormal, futuristic and contemporary romances. She is a Romance Writers of America 2013 Golden Heart Finalist for her romantic suspense, RAMPANT PERFECTION which will be available in the fall of 2015.

A combination of her love of reading and her vivid imagination―plus a strong desire to rewrite the endings of movies that just didn’t end right―lead Larissa into the world of writing.

Larissa has lived in Florida for her entire life. In her spare time, she enjoys teaching baton twirling and dance, traveling with her husband of 41 years, baking and cooking―usually altering the recipe―and playing dress up with the brightest lights in her life, her four grandchildren.