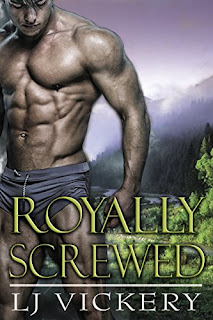 Huxley Abelard lives and fights alongside the immortals of the Blue Hills as a human, but he’s always felt something…more. A prophecy foretells that a mortal will ascend to become a god in the Underworld, but Hux’s wicked past could cost him the throne and the sexy doctor who haunts his days and nights. He can’t imagine a decent woman wanting a man who has done the things he’s done to survive.

Doctor Dani-Lee Whitehill has loved and lusted for Huxley since the first moment she laid eyes on him. Unfortunately, he's made it quite clear that, although he's attracted to her, he'd rather cut off his male parts than get them anywhere near her. She’s willing to play by his hands-off rules, but desire may quickly erode her patience and when it does, Hux could be royally screwed.

ROYALLY SCREWED IS BOOK 5 IN THE IMMORTALS SERIES.  LJ VICKERY HAS DONE IT AGAIN.  BOOK 5 IS EVEN BETTER THAN THE OTHER BOOKS.  THIS IS HUXLEY AND DANI-LEE'S STORY AND MY FAVORITE.  THERE HAS ALWAYS BEEN SOMETHING BETWEEN HUXLEY AND DANI-LEE.  THERE IS AN ATTRACTION AND A CONNECTION BETWEEN THEM AND HUXLEY KEPT PUSHING DANI-LEE AWAY BECAUSE OF HIS PAST.  I AM SO GLAD THEIR STORY WAS TOLD AND WE LEARNED ABOUT HUXLEY'S PAST AND WHO HE TRULY IS.  HUXLEY NEVER FELT GOOD ENOUGH FOR DANI-LEE AND THEN HE LEARNS HIS CONNECTION TO THE GODS AND HE GAINS MORE CONFIDENCE.  DANI-LEE SHOWED A LOT OF PATIENCE WITH HUXLEY AND EVEN WAS WILLING TO HELP FIND THE QUEEN.  WHEN DANI-LEE LEARNS THE TRUTH ABOUT HUXLEY, WILL IT CHANGE HOW SHE FEELS?

THE IMMORTAL IS SUCH AN EXCELLENT SERIES WITH EACH BOOK LEAVING YOU WANTING MORE.  LJ VICKERY HAS CREATED SOME VERY HOT AND JUICY GODS AND SOME FEISTY CHOSEN ONES.  THE STORY LINES ARE EXCELLENT AND KEEP YOU ON THE EDGE OF YOUR SEAT.  YOU WILL DEFINITELY BE ENTERTAINED BY THIS SERIES AND YOU ARE GOING TO LOVE ALL THE CHARACTERS AND STORY LINES.  THERE IS CONSTANT ACTION AND ROMANCE GOING ON THROUGHOUT THE STORIES AND ALOT OF TWISTS AND TURNS WHICH WILL KEEP YOU GUESSING WHAT WILL HAPPEN NEXT.  I ABSOLUTELY LOVE THIS SERIES AND ROYALTY SCREWED IS DEFINITELY MY FAVORITE.  I LOVE HUXLEY AND DANI-LEE.  BOTH ARE VERY SPECIAL IN THEIR OWN WAY.  THEY ARE SUCH EXCELLENT CHARACTERS WITH A LOT OF CHEMISTRY.  THE WRITING IS EXCELLENT WITH EACH STORY AND THE CHARACTERS ARE WELL CREATED AND THEY ALL CONNECT.  IF YOU HAVEN'T READ THIS SERIES YET, YOU DON'T KNOW WHAT YOU MISSING.  I HIGHLY RECOMMEND YOU READ THIS SERIES I AM SO EXCITED FOR THE NEXT BOOK IN THE SERIES  5 STARS 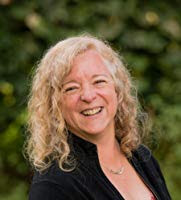