Review of Spirits Collide The Kiche Chronicles by J.M. Leduc 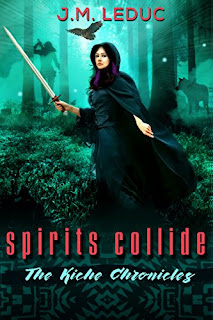 "LeDuc brings his prodigious thriller and world-building chops to this promising YA fantasy series, steeped in Native American lore, demons, and adventure. Pamoon is a fantastic female protagonist on a difficult journey reminiscent of Jeremy Robinson's The Last Hunter, and R.A. Salvatore's Drizzt series." --Kane Gilmour, International Bestselling Author of The Crypt of Dracula

In SPIRITS COLLIDE, the demons released from the Netherworld in EVIL AWAKENED have heard the call of a demonic force even greater than themselves. The Wendigo and the Ghost-witches have risen from their earthly tombs and leave a trail of death and fear in their wake as they travel to the Valley of Blood deep within the Blue Ridge Mountains.

Ayas, the Wandering Spirit, has dispatched the messengers--Golden eagles--to all of the First Peoples to warn them of the coming battle. He has gathered a war-party and makes preparations for the coming war, but his warriors are few. He knows the outcome will hinge on Pamoon's ability to gather an army and make it to the valley before its painted red with death. His preparations take him into the Misty Woods that border the valley, and there he meets up with a figure from his past; someone he once loved. Will his love for Pamoon be enough to keep him on his own path back to the Spirit Mount?

Pamoon continues her journey to become the Kiche--the Sky Spirit Goddess. She knew from the beginning this path would not be easy, but she didn't realize the sacrifices she would have to endure. Her visions of Ayas wake her from a sound sleep. Bloodied and hurt, he calls for her. Hurry, Kiche. Run. While she searches for Ayas, she discovers an old sword in the back of Kamenna's closet. Although not exactly a Native American weapon, she decides that if it was good enough for her mother, it's good enough for her. What she doesn't realize is its origin. On her quest, she encounters the Choctaw Little People, and their leader, The Watcher, who tells her of a great battle in which those who would normally fight side-by-side will fight against one another. A war that will decide who controls the Spirit Mount. Pamoon must gather an army, but to do so, she must convince enemies old and new to fight alongside her and not against her.

In this second installment of the Kiche Chronicles, Pamoon must discover and control her power of fire if she has any chance of surviving, but with power comes consequences. She must come to grips with the demons from her past before she can battle the ones in her present, but most of all, she must believe in who she is to become: she must believe she is destined to become the Kiche.

SPIRITS COLLIDE IS BOOK 2 IN THE KICHE CHRONICLES.  IN THE SECOND BOOK, PAMOON CONTINUES HER JOURNEY TO BECOME THE KICHE.  THERE ARE SO MANY DIFFERENT OBSTACLES SHE MUST FACE.  PAMOON SHOWS HOW STRONG AND POWERFUL SHE TRULY IS.  HER POWERS ARE UNLEASHED AND HER CONFIDENCE GROWS AS THE STORY DEVELOPS.  WE LEARN MORE ABOUT HER REAL MOTHER.  PAMOON FACES EACH OF HER BATTLES WITH HER PEOPLE, OTHER TRIBES AND HER FRIENDS BY HER SIDE.  PAMOON CONTINUES TO MAKE  NEW FRIENDS AND LOSES SOME ALONG THE WAY.   I REALLY LOVE THIS SERIES.  I LOVE HOW THE AUTHOR USES INDIAN FOLKLORE TO CREATE THIS MAGICAL, SUSPENSEFUL AND UNIQUE STORY.  THERE ARE SO MANY DIFFERENT GENRES AND DIFFERENT MAGICAL BEINGS IN THE STORY.  THERE IS ALOT OF ACTION, ROMANCE, SUSPENSE, MYSTERY, MAGIC AND FOLKLORE.

THIS IS AN EXCELLENT SERIES FOR THE PARANORMAL FAN.  YOU WILL NOT BE DISAPPOINTED.  J.M. LEDUC HAS BECOME ANOTHER ONE OF MY FAVORITE AUTHORS.  I LOVE HIS CREATIVITY, IMAGINATION AND HIS STYLE OF WRITING.  HIS CHARACTERS ARE UNIQUE AND DIFFERENT.  THERE ARE SO MANY DIFFERENT MAGICAL BEINGS.  I LOVE IT.  THIS BRINGS SO MUCH MORE TO THE STORY.  J.M. LEDUC, AUTHOR WILL YOU DRAW INTO THIS MAGICAL AND UNIQUE WORLD AND YOU WILL FALL IN LOVE WITH PAMOON.  I LOVE HER CHARACTER.  SHE IS TOUGH, STRONG, SENSITIVE AND PASSIONATE.  EVERYTHING THAT SHE NEEDS TO SUCCEED.  I CAN'T WAIT TO READ THE NEXT BOOK IN THE SERIES.  I  CAN'T WAIT TO SEE WHAT HAPPENS NEXT WITH PAMOON AND HER FRIENDS.  5 STARS 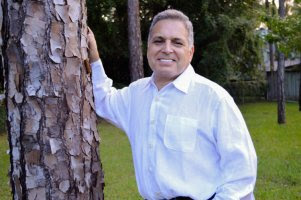 Biography
Mark Adduci, writing as J. M. LeDuc, is a native Bostonian, who transplanted to South Florida in 1985. He shares his love and life with his wife, Sherri and his daughter, Chelsea.
Blessed to have had a mother who loved the written word, her passion was passed on to him. It is in her maiden name he writes.

J.M. LeDuc's first novel, "Cursed Blessing," won a Royal Palm Literary Award in 2008 as an unpublished manuscript in the thriller category and was published in 2010. The rest of the Trilogy of the Chosen: "Cursed Presence" and "Cursed Days" followed in 2012, as well as a novella, "Phantom Squad"--a prequel to the trilogy. "Cornerstone," the continuation of the Phantom Squad Series was published in 2013 to critical acclaim.

"SIN" is the first book in the new Sinclair O'Malley Series.

J.M. is a proud member of the prestigious International Thriller Writers (ITW) as well as the Florida Writers Association (FWA) and loves to interact with his fans. He can be reached at jm_leduc@yahoo.com and on Facebook on his author page.