Bruised and battered hearts can keep beating. But can they heal?
Preston and Nick endured the breakup of all breakups when Nick accused her of cheating on him. He insisted, and she denied while the rain pounded against her driveway and thunder roared in the distance. Then they both ran—Preston to a life of Rock & Roll, and Nick to a career in the Army.
Four years later, they’re damaged and broken almost beyond repair. He’s carrying baggage from his military days, and she bears the scars of living a lifestyle she’s grown to hate.
When Preston’s label forces her to take time away from music, their paths cross in a parking lot not twenty-four hours after her hometown return, anger and sparks flying in a confusing blend. But regardless of the feelings neither has been able to shake, too many lies and secrets stand in the way of the one thing they need in order to recover.
Each other.

I ended the song with a haunted chord and frowned when I heard clapping coming from somewhere beneath me. Standing, I propped my guitar on the balcony rail and looked over the edge to find Nick leaning likewise one floor below. The sadness in his eyes let me know, without a doubt, he understood the lyrics were about us.

“‘Pirates and Cowgirls,’” I whispered, uneasy that he’d heard a message so personal between us. On the radio would’ve been different. Listening to it being written, and almost face-to-face? “I didn’t mean for you—”

“Don’t apologize, Preston. It happened, and you’re a songwriter. I’d be shocked if I didn’t end up in a song or six. I might even be insulted.” He put a deliberate spin on his last sentence, but the teasing quality didn’t hide his hurt at the reminder of our history. I could see pain in his clouded gaze and thin smile, making me wonder why he’d bother with the attempt to lighten the situation.

Was he trying to make me feel better? I couldn’t think of another explanation, and I had a hard time reconciling that the man who’d broken my heart without mercy was now attempting to lessen my pain by downplaying his. How could the two reactions come from the same person?

I decided not to question the matter out loud. Instead, I offered him a grin as phony as the one he directed at me. “Is this you being civil?”

“Well, you did perform a concert. I hear it’s customary to applaud.”

I rolled my eyes, and he smiled genuinely for a second before he pushed away from the rail. “I guess I should head back in.”

I didn’t want him to leave, but asking him to stay would’ve been one of the dumbest decisions of my life, so I nodded and grabbed my guitar. “Good night, Nick.”

He grunted a response like he’d done so many times when we were younger and he was too tired to bother with an actual reply, then turned toward his apartment. I fought back the warm memories of the same noise being used over the years to mean, “yes,” “no,” “sure—pizza sounds fantastic,” and countless other random, small, beautiful things. If the smile those recollections brought to my face was any indication, diving into the thoughts would be dangerously lovesick territory. 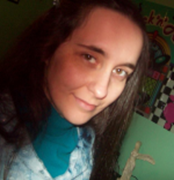 Connie L. Smith spends far too much time with her mind wandering in fictional places. She reads too much, likes to bake, and might forever be sad that she doesn’t have fairy wings. And that she can’t swing dance. Her music of choice is severely outdated, and as an adult she’s kind of obsessed with Power Rangers. She has her BA from Northern Kentucky University in Speech Communication and History (she doesn’t totally get the connection either), and is currently working on her MA.