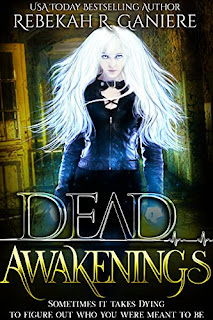 Being dead is a great way to find yourself… Struggling to pay her bills, New York theater student Evaine Michaels sees an opportunity to make money by taking part in an unsanctioned clinical trial for a new drug. But things don’t go as planned. Instead, she wakes up in a derelict hospital, chained to a bed with no memory of who she is or how she got there. Then a band of pale-skinned, fiery-eyed men, led by the gorgeous Luca, bursts in and rescues her. Taking her to a safe-house for her kind, Evaine learns that the drug trials have made her a Deader- a reanimated Undead. Luca is inexplicably attracted to newly rebirthed Evaine. But he has no time for the feelings she’s awakening within him- or the fact that she can read not only his thoughts, but his feelings as well. He's spent the last decade exterminating the scientists experimenting on, and creating Deaders. And the last thing he needs is a female messing with not only his mission, but also his head, and his heart. Especially a volatile newborn Deader. Evaine and Luca find themselves drawn to each other in a way neither has experienced before- until Evaine remembers not only who she is, but that she’s engaged. And that her human fiancé, Tristan, is probably still looking for her. But when a rogue faction of Deaders, called Feeders, attempts to kidnap Evaine, Luca suspects she might be the key to stopping the experiments for good. And everyone will have to band together to keep Evaine off the enemy's cutting table once and for all. Those who love Ilona Andrews, J.R. Ward, and Sarah J. Maas will love this Dark Paranormal Romance. Hurry and scroll up to get a Bite of Dead Awakenings Now!
MY REVIEW
DEAD AWAKENINGS IS A BRILLANT START TO A NEW PARANORMAL SERIES. REBEKAH R. GANIERE HAS CREATED A UNIQUE TWIST ON THE ZOMBIES TROPE YOU NORMALLY SEE IN BOOKS AND IN MOVIES.  I REALLY LOVED THIS STORY AND THE CHARACTERS ESPECIALLY EVAINE AND LUCA.  DEAD AWAKENINGS PULLS YOU INTO THE STORY AND CHARACTERS IMMEDIATELY AND DOES NOT LET GO.  THE AUTHOR HAS YOU ON THE EDGE OF YOUR SEAT AS YOU TRY TO FIGURE OUT WHAT WILL HAPPEN NEXT.  I LOVE THE WORD DEADERS WHICH IS APPROXIATE ON HOW TO DESCRIBE WHAT THEY HAVE BECOME.
WE ARE INTRODUCED TO EVAINE WHO IS STRUGGLING TO PAY HER WAY THROUGH SCHOOL FOR THEATRE. SHE LEARNS OF A NEW DRUG TRIALS THAT WILL PAY YOU CASH. SHE DECIDES TO DO THE TRIALS SINCE SHE REALLY NEEDS THE MONEY.  EVAINE WAKES UP WITH NO MEMORY OF WHERE SHE IS AND WHAT HAPPENED TO HER.  SHE IS RESCUED BY A GROUP OF MEAN LEAD BY LUCA WHO ARE DIFFERENT.  EVAINE LEARNS SHE HAS BECOME A DEADER THROUGH THE DRUG TRIALS AND MUST LEARN HOW TO LIVE WITH IT.  ALONG THE WAY, SHE FINDS LOVE AND A CLOSE FAMILY SHE HAS ALWAYS WANTED.  THE GROUP WORKS TO STOP THE PERSON RESPONSIBLE FOR DESTROYING THEIR LIVES.
DEAD AWAKENINGS IS A MUST READ FOR YOU PARANORMAL FANS OUT THERE. IF YOU LOVE ZOMBIES THIS DEFINITELY A STORY YOU WANT TO READ.  EVEN IF YOU DON'T LOVE ZOMBIES, YOU WILL AFTER READING DEAD AWAKENINGS. I LOVE THE AUTHOR, REBEKAH R. GANIERE'S WRITING STYLE AND HOW THE WORDS JUST FLOW WITH THIS STORY.  THE CHARACTERS ARE SO UNIQUE AND REAL AND YOU WILL LOVE THE CHEMISTRY BETWEEN LUCA AND EVAINE.  I CAN'T WAIT TO READ THE NEW BOOK IN THE SERIES.  5 STARS 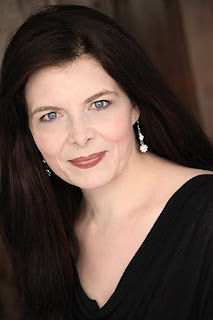 About Rebekah R. Ganiere USA Today Bestselling Author and Screenwriter, Rebekah grew up on both the east and west coasts and currently lives in the Los Angeles area. From the Giving Tree by Shel Silverstein to The Stand by Stephen King, Rebekah has always immersed herself in other people's worlds. She began writing in junior high and then found she liked pretending to be other people's characters in high school. Lettering in drama she went on to study theater in college as well. After college she continued acting until becoming a mom. Ultimately, she ended up going back to writing her characters down instead of acting them out, so she could stay at home with her kids. Rebekah's novel Dead Awakenings, debuted in January 2014 hitting the bestseller list the first day. Her Fairelle Series of Fairytale retellings has won numerous awards as have several of her other books and screenplays. Rebekah is the former President of RWA Fantasy, Futuristic & Paranormal Chapter. In her spare time when she isn't writing, you can find her hanging out with her husband, homeschooling and driving her four children to auditions, violin, parkour, ice skating, dance lessons, gymnastics, fencing, coding classes and more. Or lounging at home with her neurotic German Shepherd, murderous Bearded dragon, three adorable guinea pigs and two lazy tortoises. The escaped snake has yet to be found. Rebekah's favorite pastime is to cosplaying with her family and speak at Comic Cons all over the west coast. Including San Diego Comic Con, WonderCon, Long Beach Comic Con, Salt Lake Comic Con, FyreCon, LTUE, and more. "It's Never too late to be, what you might have been." George Eliot www.RebekahGaniere.com www.Facebook.com/VampiresWerewolvesZombies
Posted by Girl with Pen at 6:00 AM