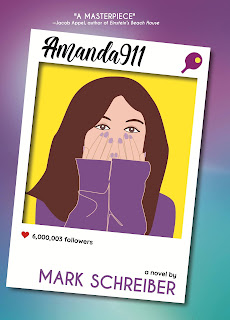 “Sixteen-year-old Iowa schoolgirl Amanda Dizon may be the nation’s most unremarkable teenager, until she falls down a well and finds herself instantaneously transformed from irrelevant to influencer.  Mark Schreiber’s sly, rollicking masterpiece, Amanda911, follows Amanda’s escapades and sends up the craven, fame-obsessed virtual culture of today’s adolescents.   As insightful as Dickens and as innovative as Heller, Schreiber is the definitive satirist of the social media generation.”—Jacob M. Appel, author of Einstein’s Beach House

EXCERPTS (Please choose only ONE to use with your post):

Falling down a well was both the best and worst thing that ever happened to my granddaughter.

She was a Disney princess to me, but a comic sidekick to her classmates, who’d never been

kissed by a boy—or I suppose by a girl—been asked to a dance, or chosen for any role in a school production that did not conceal her face.

Most people under twenty probably don’t know what a well is.

Haven’t seen one. Probably think it’s just something you say when you need to buy time, like like, or when someone asks you how you’re feeling, although I guess these days everyone says good or OK, or nothing at all, opting for an emoji instead. Do kids even talk anymore, in the crowded loneliness of their bedrooms? Did Amanda even scream when she fell down the well? Or did she just send a screaming emoji?

So, when millions of kids all over the globe saw the headline, they shared via social media:

More than plenty had to Google well to comprehend its meaning.

I’m sure she got at least half a million hits just from image searches that returned a picture of an oil rig in the North Sea. Geez, her international peer group must have thought, or words or emojis to that effect. A girl has fallen thousands of feet smack into a tidal wave. I hope she’s more Kate than Leonardo.

But I only fractured one ankle, said Amanda. The doctor said I can probably go home tomorrow.

But nobody knew that when the story broke, did they?

The goal is ten thousand dollars! Nicole shouted above the music.

$305,050 is the amount pledged. So you can easily afford to buy me a Jaguar. I just want a basic one. And you’ll have money left over to buy a car painted rainbow colors for yourself, and probably a house with a life-size stuffed unicorn.

Amanda’s mom grabbed her daughter’s arm. Can you please give us a minute, Nicole?

She helped her daughter into a wheelchair and wheeled her into the corridor, where it was quiet enough to talk in normal voices, and bright enough to see each other clearly.

She knelt down so that their gaze was level. Are you OK, darling?

Are you kidding? This is the best day of my life!

You suffered a traumatic experience.

The well? I should have fallen down that thing a long time ago!

Listen, this is all nice and fun, and I’m glad all your classmates have finally taken an interest in you, even if they have ulterior motives...

Mom, cut to the chase.

But none of this is real. It’s just entertainment. The RainMan account, the six million friends...

The Influencer Festival was the brainchild of Emerson Frost, a Silicon Valley billionaire who thought Burning Man contained the wrong-colored sand and not nearly enough water. The 150 influencers and their guests were comped their trip, and the models, celebrity chefs and musicians were paid. He sold sponsorships and documentary rights, but the festival wasn’t meant to make a profit. Rather he used it as a tax-deductible party and a way to promote his cloud data company.

He had built thatched-roof huts; communal showers and toilets; an amphitheater; a windowless e-sports auditorium equipped with rows of consoles and big screens; an indoor disco with a bar;

three restaurants in white tents, with bars of their own; a swimming pool with bar service; and a dedicated cell tower. All behind a secluded white sand beach. And there was a dock long enough to moor his yacht, and other pleasure boats. And a helipad.

Wow! said Amanda as we were driven through the gate. This is like a camp for rich people.

Mark Schreiber was born in Cincinnati, Ohio in 1960, graduated high school at age fifteen and began writing novels full-time. Princes in Exile, which explores a prodigy’s struggle to accept his own mortality at a summer camp for kids with cancer, was published in 1984 and made into a feature film in 1991. It has been published in ten countries, received two awards in Europe and was shortlisted for the Austria Prize. Carnelian, a fantasy, was published by Facet in Belgium. Starcrossed, a rebuttal to Romeo and Juliet, was published by Flux and translated into French and Turkish. His illustrated science book, How to Build an Elephant, was published as an Apple app by Swag Soft. He has written over forty books and received two State of Ohio Individual Writer Fellowships. For the last seven years he has been a digital nomad, living on four continents. He currently resides in Costa Rica.

If you’re unable to embed, please use this HTML: