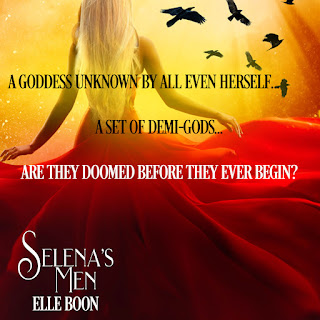 A Goddess unknown by all even herself…

Stolen from her birth parents as an infant, Selena lived her life as a normal human, loved by her adoptive parents until tragedy took them from her. Life had given her more knocks than most could take, but she was determined to survive, even when faced with death. Until she came face-to-face with two men who offered her so much more. But could she face what loving them could cost her?.

A set of Demi-Gods…

Max and Malcolm King were once warriors called the Ravens of War for Zeus. They’ve searched the Earth for the one woman to complete them. They’ve fought alongside battlefields for thousands of years, protecting humanity from demons and beings bent on destroying all that’s good in this world. Now that they’ve found their Fated, the one female who they’d give their life for. Will it be for nothing when they find out who her father is?

Are they doomed before they ever begin?

They’re determined to keep Selena safe, knowing every way to kill a man or demon, yet neither were prepared for the ultimate foe to resurface. They’d help defeat Cronus, the God who was bent on destroying Zeus and all the other Gods and Goddesses on Olympus all those years ago, however it seems they’d not done a good enough job. Somehow the God has found a way to wreak revenge and this time he’s taken something more precious than Olympus. Will the Ravens be able to save Selena this time, or will they lose the most important thing, their Fated?