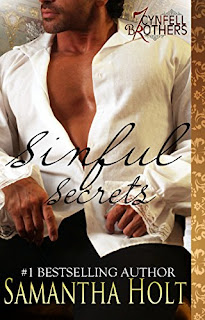 Lust, gluttony, greed, sloth, wrath, envy and pride. The Cynfell brothers are the very embodiment of a sinful existence. But could the right woman change that?

The elusive youngest Cynfell is the only bachelor remaining. And Gideon intends to keep it that way. After having first-hand knowledge of just how fragile his parents’ marriage was, he isn’t interested in women for anything more than a brief dalliance.

However, Cleo Talbot is set to change that.

Friends from childhood, Gideon and Cleo had always enjoyed an easy relationship. Until she became engaged to a fool of a man. Gideon can’t help it. He’s enraged that she should lower herself to marrying the idiot.

Cleo is hardly pleased to be engaged to Niall Harper either. He’s harmless enough, but after saying yes, regret kicks in quickly. Why did she let herself be pushed into such a match? Could ruination really be so bad? And why is Gideon suddenly so interested in her wedding plans?

When it becomes clear that her harmless fiancé is not so innocent after all, Gideon and Cleo must join forces to ensure she’s not forced into marrying him. With the help of a person from Gideon’s past—one that means he has to acknowledge the lie he’s been living—and his brothers, can they bring the criminal to justice or will Gideon and Cleo be left with many regrets, knowing that perhaps they were more than good friends after all?

SINFUL SECRETS IS BOOK 7 IN THE CYNFELL BROTHERS SERIES.  I REALLY LOVE THIS SERIES.  SAMANTHA HOLT HAS DONE IT AGAIN AND WROTE A VERY GOOD HISTORICAL SERIES FILLED WITH ROMANCE, ACTION AND DRAMA.  THIS BOOK CAN BE READ AS STAND ALONE.  I HIGHLY RECOMMEND YOU READ THE WHOLE SERIES.  YOU WILL NOT BE DISAPPOINTED.

IN THIS BOOK, WE MEET GIDEON WHO ALWAYS FELT LIKE HE DIDN'T BELONG IN THE FAMILY BECAUSE OF A SECRET.  HE IS THE YOUNGEST OF 7 BROTHERS AND IS NOT INTERESTED IN GETTING MARRIED ANYTIME SOON.  CLEO HIS FRIEND SINCE THEY WERE CHILDREN ALWAYS HAD A WONDERFUL RELATIONSHIP UNTIL CLEO BECOMES ENGAGED TO NIALL.  THEN EVERYTHING CHANGES BETWEEN HER AND GIDEON.  GIDEON ACTS VERY POSSESSIVE AND JEALOUS ABOUT THE ENGAGEMENT AND TRIES TO WARN CLEO THAT HER FIANCE IS DANGEROUS.  ONCE CLEO REALIZES THE TRUTH ABOUT NIALL, SHE TEAMS UP WITH GIDEON TO FIND THE EVIDENCE TO USE AGAINST HIM TO STOP THE WEDDING.   THE DANGER MAKES CLEO AND GIDEON REALIZE HOW THEY TRULY FEEL ABOUT ONE ANOTHER.  WILL IT BE TOO LATE FOR THEM TO CONFESS HOW THEY FEEL?  WILL THEY BE ABLE TO STOP NIALL?

I LOVE GIDEON AND CLEO'S STORY.  I LOVE HOW THEY VERY CLOSE FRIENDS AND THEN FELL IN LOVE BUT IT TOOK CLEO BEING ENGAGED AND IN DANGER FOR THEM TO BOTH REALIZE HOW THEY TRULY FELT.   I LOVED THE BICKERING BETWEEN THEM AND THE CHEMISTRY.  THE ROMANCE AND FRIENDSHIP WAS VERY BELIEVABLE AND REAL.  I LOVE ALL THE BROTHERS AND CHARACTERS IN THIS SERIES.  SAMANTHA DOES AN EXCELLENT JOB IN DESCRIBING THIS TIME PERIOD AND HOW EVERYTHING WAS.  HER CHARACTERS ARE VERY REAL AND BELIEVABLE.  I LOVE SAMANTHA HOLT'S BOOKS AND WILL CONTINUE TO READ THEM.  IF YOU HAVEN'T READ ONE OF HER BOOKS, YOU DON'T KNOW WHAT YOU ARE MISSING.  5 STARS 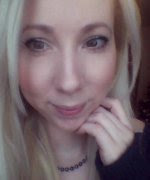 For subscriber only giveaways and exclusive freebies, simply copy and paste the link:www.samanthaholtromance.com

You can find Samantha on Facebook and join in her weekly Funday Friday giveaway: https://www.facebook.com/samanthaholtromance

Samantha lives in a small village in England with her twin girls and a dachshund called Duke. She enjoys writing historical romance involving chivalrous knights, hot highlanders and cravatted men. Writing is her (more than) full time job but on the rare occasion, she's not writing, she loves to visit the many stately homes and castles nearby.
Posted by Girl with Pen at 6:00 AM