Review of Lord of the Jungle by Sheri Fredricks 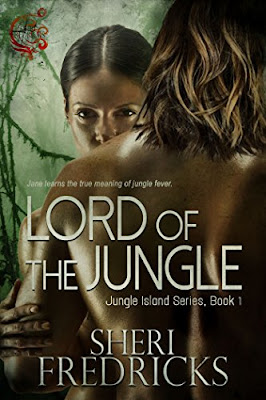 A shipwrecked woman.
The uncharted island.

Jane Porter craves a thrill but when marauders scuttle her ship and she washes ashore onto an island inhabited by animals and one sexy wildman, that’s when the real adventure begins.

Dependent upon her vine-swinging rescuer who acts more ape than musclebound man, she places her survival in his rugged hands and relinquishes her desire to his raw sensuality.

For more seasons than he can remember, Tarzan has lived among the tiny island’s gorilla band. Instinct propels him to save the female he finds half-dead in the surf, but gazing into her eyes, his mating tool dances an ancient tribal beat.

While the pirates search for their bounty, Tarzan and Jane are in danger. To survive, they’ll have to hang onto each other as they swing for dear life. Their adrenaline-rush of passion among the canopy of the jungle threatens not only a dizzying fall from a great height, but also into love.

LORD OF THE JUNGLE IS BOOK 1 IN THE JUNGLE ISLAND SERIES.  JANE IS SHIPWRECKED ON AN ISLAND AND TARZAN RESCUES HER.  IT IS HARD FOR TARZAN AND JANE TO COMMUNICATE SINCE HE DOES NOT KNOW ENGLISH.   TARZAN AND JANE DO COMMUNICATE THROUGH THEIR DESIRE AND PASSION. JANE PLACES HER TRUST IN TARZAN TO PROTECT HER.  WILL TARZAN BE ABLE TO PROTECT JANE FROM THE PIRATES THAT SHIPWRECKED HER?

THIS IS THE FIRST TIME I READ ANYTHING BY SHERI FREDRICKS AND I AM GLAD I DID.  I KNEW I HAD TO READ THIS BOOK AS SOON AS I SAW THE COVER.  LORD OF THE JUNGLE WAS A FAST READ FOR ME AND IT WAS OVER BEFORE I WANTED IT TO BE.  I LOVE HOW THE AUTHOR DOES A RETELLING OF THE STORY.  HAVING JANE BEING SHIPWRECKED AS A RESULT OF PIRATES.  IT DEFINITELY WORKED FOR ME.  I WAS DRAWN INTO THE STORY FROM THE VERY FIRST PAGE UNTIL THE END. I ENJOYED THE INTENSE CHEMISTRY AND PASSION BETWEEN TARZAN AND JANE.  THE SEX SCENES DEFINITELY MADE THE PAGES SIZZLE IN THIS BOOK.  THEIR RELATIONSHIP CONTINUED TO DEVELOP AS THE BOOK WENT ALONG.  JANE WAS DEVELOPING FEELINGS FOR TARZAN AND TARZAN WAS SO VERY PROTECTIVE OF HER AND WOULD DO ANYTHING FOR HER.  THE AUTHOR LEFT YOU WITH A CLIFFHANGER.  I AM NOT A BIG FAN OF CLIFFHANGERS SO I AM HOPING THE NEXT BOOK COMES OUT SOON.  I CAN'T WAIT TO READ THE NEXT BOOK IN THE SERIES TO SEE WHAT HAPPENS NEXT.

I WILL HAVE TO CHECK OUT MORE OF SHERI FREDRICKS BOOKS. I  ABSOLUTELY LOVE HER WRITING AND HER CHARACTERS AND CAN'T WAIT TO SEE WHAT ELSE SHE HAS WRITTEN.  SHE HAS BECOME ANOTHER ONE OF MY FAVORITE AUTHORS.  5 STARS 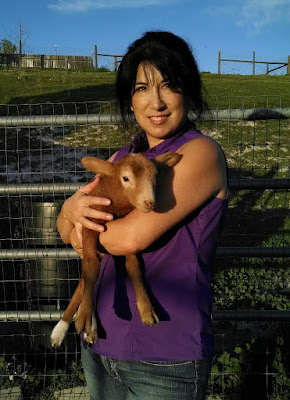 Always on the hunt for the uncommon things in life, award-winning author Sheri Fredricks thrives on creating one-of-a-kind adventures.

A former engineering secretary, Sheri lives on the beautiful central coast of California. "I wanted to move away from a profession of inflexible right angles and create an unboxed world with no boundaries."

A voracious reader since her early years, Sheri found her brain crowded with stories and characters of her own. "Ultimately," she says, "my husband encouraged me to write them all down."

Sheri loves to spend time at home. A computer hutch keeps her focused on creating stories, but the panoramic view of life on a ranch will call her outside to play in the sun

Winner of the Paranormal Romance Guild Reviewer's Choice Award and a Finalist multiple times for InD’Tale Magazine’s Reward Of Novel Excellence award (RONE), she has numerous five-star reviews everywhere eBooks are sold.
Posted by Girl with Pen at 6:00 AM