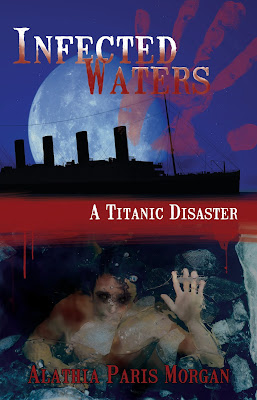 Everyone knows the tale of the Titanic…a doomed voyage…here is what actually happened on April 14, 1912. Murder, chaos, and the undead threaten to sink the ship faster than any iceberg.

As a nurse, Nora Ryan was prepared for the common illnesses, but what she discovers instead is an infection modern medicine has yet to name.

Head steward, Jonathan Davis was not expecting to meet Nora and he certainly wasn’t expecting to fight a deadly infection alongside her. As the first victim of this strange illness dies and passengers are rapidly becoming infected; these two strangers must find a way to stop these undead creatures from taking over the ship.

The trip home from England to America becomes hectic for the Lambert family when they overhear startling rumors from their second class stateroom. People are dying, and the dead are taking anyone they can sink their teeth into with them. Will their family make it to their destination or will they be caught in the rising tide of infection that intends to leave no living being behind?

“Aren’t you worried that you could catch whatever he has?” Jonathan asked as he tried not to take a step back in fear.

Pointing to his obvious scrapes, Nora replied, “The only way for this type of infection to spread would be if you had an open wound and it touched yours. I would like to know what caused it though.” Nora rose to empty the water and returned with a bottle of alcohol to cleanse the gashes. “Find someone you can trust. Have him come and hold this man down while I pour this over his wounds. I can’t stitch him up until the infection goes away.” Nora continued to prep by collecting bandages to wrap his legs, chest and shoulder.

Jonathan left to do as she asked. He returned a short time later with two of the men who had helped to carry the patient to the infirmary.

“Keep watch outside, and don’t let anyone inside.” Jonathan warned one of the men. “Now you, grab hold of his arms while I hold his feet,” he commanded his other subordinate.

“Are we ready?” Holding a towel next the patient’s neck to catch any alcohol that dripped, Nora was in place.

“Yes.” They both answered in unison.

“Tightly, now. Even unconscious, his body will react.” Nora began pouring the liquid over the shoulder wounds.

The man simply moaned and shook his head back and forth.

Waiting for his body to recover slightly, Nora moved into position by his chest.

“Lift him up onto his side under the shoulder, and do it gently. I need to make sure I get the entire side of his chest area covered. Quickly, so it doesn’t hurt his other wounds.” Nora knew the wounds on the back of his leg were going to hurt worse since they appeared to be much deeper.

Wincing as the liquid poured out, Nora wasn’t expecting the reaction from the unconscious man.

The scream of pain from the man erupted and Patrick, the man holding his arms, lost hold of him as he jerked. In the process of trying to regain hold of his shoulders, Patrick accidentally pressed on the shoulder with the scratches, causing the man to bite his wrist.

“What the bloody hell?” Patrick yelled as he tried to detach the man’s teeth from his arm. “He won’t let go! Bloody hell, that hurts!”

Jonathan let go of his hold on the man’s feet and leaned forward to pry the man’s teeth from Patrick’s arm.

“Wait. If you rip the teeth away, you’ll cause more damage to his arm.” Nora cautioned as she tried to be gentle.

“Forget what she says. Get this mad man off me now. AGHHH!”

Jonathan reached behind the patient’s head and pinched the base of his neck, causing him to release Patrick’s arm.

Covering the dripping wound immediately, Nora pulled Patrick over to the side. “Press this on it and don’t move.” Turning to get the alcohol and a fresh bandage, Nora didn’t want Patrick to think about what was coming next.

Moving his arm over the basin, Nora sighed as she lifted the bandage to uncover a perfect impression of teeth.

“It’s torn, but not ripped to shreds. Once we get it clean I can stitch it, yet when it heals, the skin will be so tight it might tear either way.”

“Just pour the stuff already. Bandage it up. I’m going to go lie down in my bunk and get drunk,” Patrick stated as he eyed Jonathan, willing him to say anything contrary.

I HAVE NEVER READ ANYTHING BY ALATHIA PARIS MORGAN AND I AM GLAD I DID.  A TITANIC DISASTER IS THE RETELLING OF THE SINKING OF THE TITANIC WITH A PARANORMAL TWIST.  I LOVE HOW THE AUTHOR TOOK THE ACTUAL STORY AND ADDED THE UNDEAD INTO THE STORYLINE AS THE REAL REASON FOR THE SINKING OF THE TITANIC  I WAS DRAWN INTO THE STORY FROM THE VERY FIRST PAGE UNTIL THE VERY END.  IT WAS FILLED WITH ALOT OF ACTION AND SOME VERY INTERESTING AND WELL DEVELOPED CHARACTERS.  THE ACTION WAS NON-STOP AND YOU DIDN'T KNOW WHAT WAS GOING TO HAPPEN NEXT.  I DEFINITELY WILL BE LOOKING FOR MORE BOOKS BY THIS AUTHOR.  I NORMALLY DON'T READ MANY BOOKS ABOUT THE UNDEAD BUT I LOVE TALES OF THE TITANIC AND I FOUND THIS STORY VERY FASCINATING AND BELIEVABLE.  4 STARS

Alathia is known to those around her for having an a long time love affair/obsession with Dr. Pepper, she has asked to be buried with a can so that it never runs out in the after life. Always bossy, she uses her mothering instincts to help others and share awareness of abuse in child and domestic situations.

A B.S. in History and English gave wings to her vivid imagination in book form. A supportive and loving husband has given her the chance to make her dreams a reality. Their three daughters and three dogs keep her busy while writing is a great way for her to wind down and destress.