Forever In Her Eyes by Karen Rose Smith 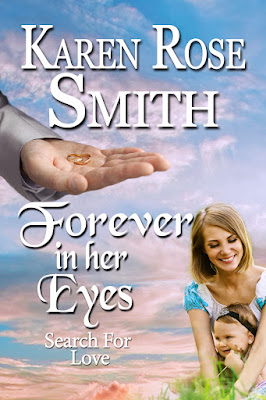 Melanie Carlotti lost everything, including her eyesight. Because of a donor, she regained it again. But with this gift came haunting dreams, a man's face and questions to be answered. Thanks to the help of a psychic, Melanie discovers the identity of her donor. She steps into the life of her donor's husband Zack and toddler Amy, finding clues but not the definitive answer and peace. Until...she realizes she's in love with Zack, not because of his wife's memories that accompanied Melanie's cornea transplant, but because of her own feelings for this widowed single dad. The truth sets Melanie free but can cost her the man she loves. If Zack can believe Melanie's story and trust her, they will both find happily ever after. But if he can't believe…

Original copyright 2002 A Husband In Her Eyes

Keeping his gaze steady on hers, he noted, "There's almost a two-year gap in your work history, and you've only finished a couple of minor jobs in the past few months. Can you tell me the reason for that?"
She could lay it all out on his desk right now—tell him about the fire and her cornea transplants and the keening ache that had brought her to him. If she did that, he might escort her out of his building, lock the doors and never let her back in. She'd be left with dreams and no explanations. "I had some health problems," she explained. "Now they're resolved and I'm ready to get back into the swing of my career again."
He seemed to think about that. "Why here in Northern California rather than back in L.A.?"
"I need a change. I've heard that Santa Rosa is a particularly lovely place to live. I have a good reputation that I can take with me anywhere, so I decided to start fresh. If I get this job."
He arched a brow. "And if you don't?"
"I might stay in the area for a while and see if there are any other opportunities."
After another long, silent appraisal, he asked, "Do you have a place to stay?"
"Not yet. I checked into the motel at Cool Ridge last night." Cool Ridge was about forty-five minutes outside of Santa Rosa and consisted of little more than a main street. She'd been fortunate to find a room in the one motel there. A country-music festival was being held at nearby Clear Lake this week and vacancies were hard to find anywhere in the area.
As her gaze held Zachary Morgan's, there seemed to be more than words between them. Something akin to electricity. She wondered if he felt it, too.
His brows furrowed as he once again looked down at the papers on his desk, and she suspected he was buying time as he made a first impression of her. "Your résumé is certainly complete. I phoned—"
Suddenly a toddler came running into the office. From Jake's background report, Melanie knew Zack's daughter was eighteen months old. The little girl made a beeline straight for Zack and held onto his knee, looking up at him with a beatific smile.
Melanie's breath caught at the wave of feelings that washed over her. Zack's daughter had dark brown eyes and his dark brown hair.
"Da-Dee. Up," she said gleefully.
Flo Briggs came tearing into the office, breathless. "I'm so sorry, Zack. She got away from me. Right after her nap, she's got more energy than ten of me."
Zack laughed and lifted his daughter onto his lap. "How's a man supposed to conduct business with a distraction like you around?" His voice was teasing and warm and altogether loving.
"Da-Dee, Da-Dee," she said, as if that explained absolutely everything.
He shook his head. "I can't play right now. Maybe Flo can find a cookie or two for you."
As if telling her dad that was a fine idea, the child wrapped her arms around his neck and gave him a tight squeeze.
He hugged her back, and looking over her tiny shoulder, he said to Melanie, "This is my daughter, Amy. Since we moved here and I often work out of the penthouse, she takes advantage of any time she can find me."
Amy suddenly let go of her dad's neck and turned to look at Melanie.
Melanie had felt an almost-hum when her gaze had first connected with Zachary Morgan's. Now as she looked at his daughter, there was that same feeling of connection. Was it her imagination? Truth be told, if she hadn't already been dealing with strange things since her operation, she might think she was going crazy.
Her heart told her another story...especially when Amy blinked twice at her, broke into a super-wide smile and scrambled from her dad's lap. She ran to Melanie and looked up at her with wide brown eyes.
"Hi, there," Melanie said almost reverently, feeling like a mother again. Joy and sadness and an unfathomable yearning filled her. 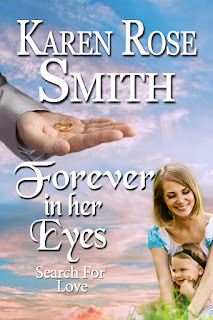 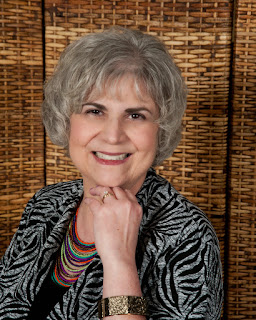 Karen Rose Smith was born in the Susquehanna Valley of Pennsylvania. Although she was an only child, she remembers the bonds of an extended family. Since her father came from a family of ten and her mother, a family of seven, there were always aunts, uncles and cousins visiting on weekends. Family is a strong theme in her books and she suspects her childhood memories are the reason.

In college, Karen began writing poetry and also met her husband to be. They both began married life as teachers, but when their son was born, Karen decided to try her hand at a home-decorating business. She returned to teaching for a while but changes in her life led her to writing romance fiction. Now she writes mysteries and romances full time. She is a USA Today best-selling and award-winning author. Her 95th novel, THE WEDDING PROMISE--Search For Love series, Book 8, was released in June 2016.  Her next mystery--SHADES OF WRATH, Caprice De Luca Home Staging Cozy series, will be on bookshelves in December.

When she isn't writing, she cares for four rescue cats and a sibling pair of strays, gardens, cooks, watercolors and photographs. Married to her college sweetheart since 1971, believing in the power of love and commitment, she envisions herself writing relationship novels, both mystery and romance, for a long time to come! 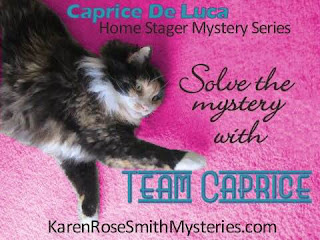