She's Got it All by Jewel Quinlan 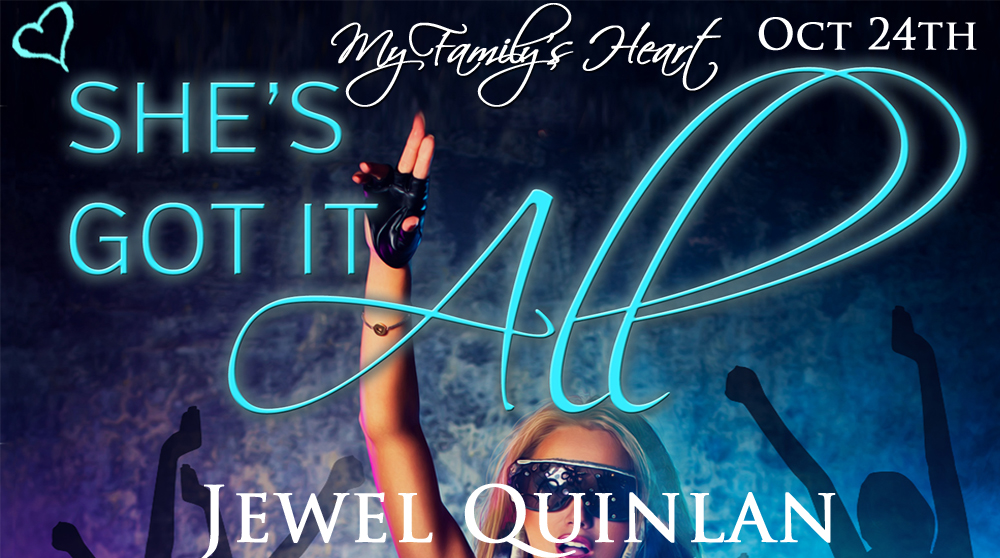 She’s living her dream, not knowing she’s stolen someone else’s…

For Kayla Cross, getting a job as a DJ at legendary club Grace in Ibiza is a dream come true. It’s what she has worked for her entire life. Even if she had to do it behind her parents’ back, like a dirty secret—then and now. She left everything behind in order to give it her all, and she finds it’s going to take far more than the level of confidence she has in order to pull it off.

Lex Granger thought the job was his. But it wasn’t. And not getting the DJ job means another season of bartending, and watching longingly as others play on stage. When his boss orders him to make Kayla feel at home, he almost rebels. But his need to pay bills wins over his emotions. He resents his competition but can’t help being affected by her sunny disposition, talent, and long, lean form. Walking the line between admiration and envy can be agony...


Kayla had seamlessly taken control of the sound system a few minutes ago and the stuff she had been playing was good, better than the typical pre-recorded shit. But what caught his attention now was the sound of her voice. She was singing into the mic on her headset. Not lyrics but a beautiful stream of notes that seemed to flutter from her gut up to her vocal cords in a lilting sound that was captivating.The notes she sang rose and fell, exotic and mysterious with the intriguing underlying beat. Her voice called, it drew…and soon women rose from their seats to the small dance area to move and sway with the music, and the men followed them. The same people who had been oblivious of the music a moment before as they’d smoked and talked were now giving their full attention to Kayla.

It wasn’t just the music that mesmerized them; it was Kayla herself. She was a vision. Her blonde hair gleamed under the lights, and her shoulders and hips writhed in a sexy dance, and all the while she continued to turn knobs and flip switches to make the music she sang to. She was absorbed in it and having a great time. Sometimes her hair flicked when she gyrated, as if in punctuation to her movements. Combined with the sound of her voice, she was like a beacon—the song of an angel caressing and drawing everyone in. It was like nothing he’d ever heard before.

“Hola!” said a man in an aggressive tone, waving a one hundred Euro bill. “Can we get ten shots of Patrón?”

“Of course. Right away, friend.” Lex focused back in on his job.

It was awhile before he could come back up for air. But when he did, he noticed that the space was packed with bodies dancing to the music Kayla played. And, although she was keeping it mellow as instructed, it was the biggest crowd he’d ever seen on the terrace during the day. Security continuously went through, trying to keep key paths clear.

Hands holding cell phones were up in the air, outstretched toward her, as they took pictures and videos. Through it all, she wore the brightest smile he’d ever seen, occasionally lifting one hand to press the earphones closer. She changed the tempo to a faster beat and the crowd responded with cheers. She bounced up and down in joy, hand waving above her head with exhilaration, and the people lifted and pumped their fists in mimicry.

She was every bit as good as any DJ they’d had before and more. She was the embodiment of everything he thought he would have experienced and felt had it been him on the stage. Somehow, she caught him watching, and gave him a cheery wave. Embarrassed, he waved awkwardly back, and then pulled his eyes back down to the bar. And, even though he could acknowledge that Rick had been right, that she was good, he couldn’t help feeling the tiny nugget of palpable distaste lodged deep in his chest.

Chelsea O'Neal lives in her fantasy world where people can fly, vampires could be real, money is never an issue and the romantic meeting of your true love is a normal happening. When not relaxing in Chelsea-ville, she enjoys talking with animals who talk back and taking long walks with her prince charming.

Actually Chelsea lives in the United States in Nebraska, where she was born and raised, with her black lab Daisey, who hasn't spoken actual words to her but she is pretty sure Daisey understands her. She is yet to meet her prince charming, though she is quite sure he is out there. Chelsea enjoys working as a youth librarian. She is an avid reader and writing has always been her passion. Chelsea has written 3 novels and a novella, she is working on her next book now.

This Event Was Organized & Hosted By:

Special Thank You To Carly's Book Reviews For The HTML Creation
Posted by Girl with Pen at 6:00 AM