Review of Titanic The Lost Child by Bonnie Dune 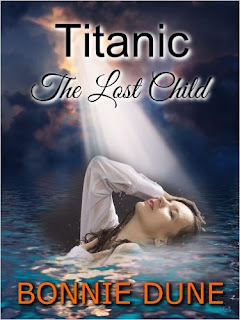 One bright April day in 1912, six little girls sailed with their families on the "grandest ship ever" - the Titanic - and into the history books. But did one of them actually survive that tragic night?

When young widow Arlisle Shepherd receives an invitation to attend the 100 year anniversary memorial cruise for the descendants of passengers of the ill-fated Titanic, she is more than baffled. She is both suspicious and fearful. Suspicious because she believes she has no Titanic ancestor; fearful because of the threatening phone calls she's been receiving since the unsolved murder of her detective husband a year earlier.

As Arlie's search for her mysterious ancestor takes her deep into her grandmother's secretive past, to elderly chatty neighbors who suddenly refuse to talk, to lonely cemeteries and to increasing threats and suspicious deaths, it also pushes her toward the possibility of once more opening her heart. But - has one of those closest to her betrayed her?

And ultimately - is solving the mystery of her Titanic ancestor worth her life?

*Author's note: Both Zee's and Arlie's stories will continue in sequels to be released in the near future.

I HAVE ALWAYS BEEN FASCINATED WITH THE STORIES OF THE TITANIC AND THE SINKING OF THE SHIP.  I WAS NOT SURE WHAT TO EXPECT WHEN I DECIDED TO READ TITANIC THE LOST CHILD.  I WAS NOT DISAPPOINTED.  FROM THE VERY FIRST PAGE, BONNIE DRAWS YOU INTO THE STORY OF THE TITANIC.  SHE HAS WROTE A MURDER MYSTERY INVOLVING THE CHILDREN OF THE TITANIC SPECIFICALLY SIX (6) OF THE CHILDREN. WHAT HAPPENED TO THE SIX (6) CHILDREN?  DID THEY SURVIVE THE SINKING AND WHAT HAPPENED TO THEM?  I FOUND THE STORY VERY INTERESTING, INTRIGUING AND ENTERTAINING AT TIMES.  THERE WAS SO MUCH HISTORY IN THE STORY ABOUT THE TITLE, IT JUST REALLY ADDED TO THE STORY AND MADE IT VERY BELIEVABLE AND REAL.

WE ARE INTERESTED TO ARLISLE SHEPHERD WHO HAS RECENTLY LOST HER DETECTIVE HUSBAND.  SHE RECEIVE AN INVITATION TO THE 100 YEAR ANNIVERSARY MEMORIAL CRUISE FOR THE DESCENDANTS OF THE PASSENGERS OF THE ILL-FATED TITANIC.  SHE IS COMPLETELY BAFFLED BY THE INVITATION SINCE SHE HAS NO ANCESTORS WHO WERE INVOLVED.  AS SHE SEARCHES FOR ANCESTORS WITH THE HELP OF HER FRIEND AND BROTHER-IN-LAW,  THE MYSTERY DEEPENS AND PEOPLE START TO DIE AROUND HER.  WILL SHE SOLVE THE MYSTERY BEFORE SHE IS NEXT ON THE LIST?  AND WILL SHE FIND LOVE AGAIN?

I REALLY ENJOYED READING TITANIC THE LOST CHILD.  BONNIE DUNE IS A NEW AUTHOR FOR ME AND I AM GLAD I GOT TO READ ONE OF HER BOOKS.  I WAS DRAWN INTO THE STORY FROM THE VERY BEGINNING UNTIL THE VERY END.  BONNIE KEPT YOU ON THE EDGE OF YOUR SEAT AND GUESSING UNTIL THE VERY END.  IF YOU LOVE A MURDER MYSTERY COMBINED WITH HISTORY AND SUSPENSE, I HIGHLY RECOMMEND YOU READ TITANIC THE LOST CHILD AND THE REST OF THE SERIES.  I AM SO LOOKING FORWARD TO READING MORE BOOKS IN THE SERIES AND ANYTHING ELSE BONNIE WRITES.  SHE IS A WONDERFUL WRITER WHO KNOWS HOW TO DRAW YOU INTO A STORY.  5 STARS 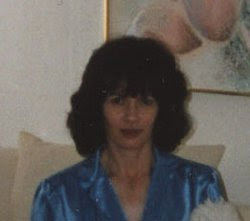 Bonnie Dune was born on the shores of Lake Michigan and lived in a number of states before the age of ten. As the only girl among five brothers, she discovered the love of escaping into fantasy and historical worlds through books, reading under the bed covers by flashlight or by the dim light of the closet long after she was supposed to be asleep. She began writing stories in her tenth year and started her first novel at the age of 16, then, caught up by life, worked as a civilian in law enforcement for 22 years. One of her jobs included reading murder reports and writing synopses for the Department of Justice. She lives in Southern California with her two poodles and besides reading and writing, also enjoys genealogy, painting, jigsaw puzzles, Disneyland, and as much time as possible spent with her family.

Like Bonnie Dune on Facebook at https://www.facebook.com/BonnieDuneBooks for updates on new books coming out soon!
Posted by Girl with Pen at 7:00 AM