Review of Lured by the Ghost Rake by Marianna Green 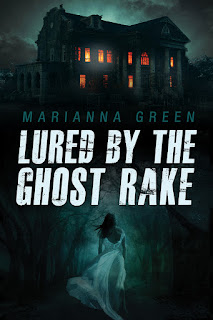 When Elda Elwood goes on a visit to her actor lover Jake Reynolds’ ancestral home, she is drawn by a portrait of his ancestor, eighteenth century rake Lord Lucas Lovegrove.

She learns the tragic story behind the viscount’s marriage to the innocent young heiress Rose Ashworth.

Elda senses that the portrait has strange powers, and that the house is haunted by Lovegrove’s predatory and sexual ghost...

And what is the secret of the sinister pagoda in the grounds?

She tried to pull it back under the warmth of the covers, but whoever it was kept a tight hold on it. That cold didn’t jerk her into wakefulness; she knew she was still half dreaming, and that was why she wasn’t put out that another man was in the bedroom.

Now she knew who he was. Though he had been dead for two-and-a-quarter centuries, she wasn’t alarmed. Still, she wanted to sleep, and grunted a protest.

She had been dreaming about moving through the grounds in a magical silver gilt light, and she wanted to try and drift back into that dream. Still, the melodious voice lured, though not much louder than the murmur of a rising wind rushing through a bamboo plantation.

She could see him through her closed lids, seemingly both in her half-waking dream and here. This Lovegrove was like the one in the vision she had seen in the conservatory, still youthful despite his excesses.

He wore some embroidered robe of either a deep blue or bluish crimson, his form not being material enough for her to tell which. She knew it soon would be. The robe, loosely tied, was falling open, so that she could see that he was naked underneath, his bare chest revealed, the muscular definition as fine as Jake’s, the golden hairs glinting in the moonlight...

LURED BY THE GHOST RAKE IS A CREEPY TALE OF A LOVESTORY BETWEEN AN EIGHTEENTH CENTURY RAKE LORD LUCAS LOVEGROVE AND YOUNG HEIRESS ROSE ASHWORTH THAT ENDED IN TRAGEDY.

LURED BY THE GHOST RAKE IS A CREEPY AND ENJOYABLE READ THAT SHOULD NOT READ ALONE.  4 STARS. 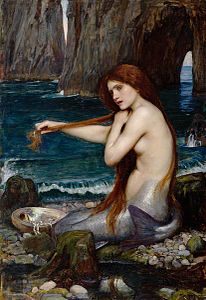 Marianna Green lives in the UK, has a geekish fascination with English Literature and History, and an irrepressible sense of humour.

Marianna Green will be awarding a $20 Amazon/BN GC to a randomly drawn winner via rafflecopter during the tour.

If you cannot embed the code, please use this HTML link: