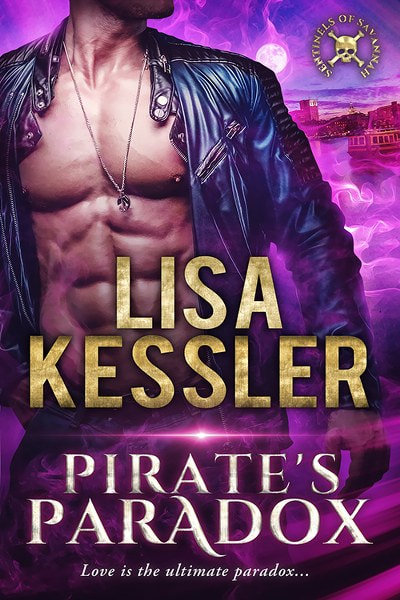 Pirate Caleb Graves may be an immortal, but he’s also a navigator and a man of science. And yet he can’t explain the erratic tides threatening Savannah. Nor the terrible dreams of sailing through a vicious, supernatural storm that he keeps having. But when fascinating, petite dynamo Diana Williams marches up to his ship and demands to speak to the captain, Caleb is caught up in a wave of unexpected fear…and an electric frisson of longing for this captivating woman.

Diana wouldn’t be a true psychic if she didn’t listen to her spirit guide. So when dream after dream compels her to visit specific coordinates in the Atlantic, she can’t ignore it. Now, she just needs a ship. Good thing she knows about a particular pirate ship that’s in tip-top shape. Complete with a surly, albeit hot, navigator who doesn't immediately believe in her visions. But no matter how much Caleb objects, she’ll risk sending the entire crew—including herself—to the uncharted ocean.

But both their dreams could be the key to saving Savannah and may even be a clue about the fabled lost city of Atlantis. Or it could damn them all to an unforgiving, watery grave.

Lisa Kessler is a Best Selling author of dark paranormal fiction. She's a two-time San Diego Book Award winner for Best Published Fantasy-Sci-fi-Horror and Best Published Romance. Her books have also won the PRISM award, the Award of Excellence, the National Excellence in Romantic Fiction Award, the Award of Merit from the Holt Medallion, and an International Digital Award for Best Paranormal.

Her short stories have been published in print anthologies and magazines, and her vampire story, Immortal Beloved, was a finalist for a Bram Stoker award.

When she's not writing, Lisa is a professional vocalist, and has performed with San Diego Opera as well as other musical theater companies in San Diego.