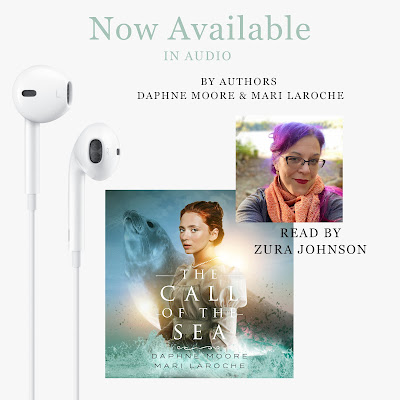 Now Available in Audio!
The Call of the Sea
by Daphne Moore & Mari Laroche
Read by Zura Johnson
Honoria Talbott is just a quiet Irish girl who loves to swim and tinker with her clockwork inventions. Until she meets Cathal mac Ler, a selkie lord charged with marrying a human female as part of a treaty negotiation between Fae and Humans.When her father and brother go missing at sea, Nora finds herself at the whims of her stepmother, who would see her married to a high-ranking cousin in order to keep her father’s wealth in the family.Torn between her duty to honor her father’s last request for a good marriage and her father’s example of marrying for love, Nora must decide what she values more. But there is power in a simple shawl and true love may finally be in reach – but will it be discovered in time?
Grab it here! https://www.audible.com/pd/Call-of-the-Sea-Audiobook/B09R29J52N
Posted by Girl with Pen at 9:19 PM