Review of The Woe of Shadows by D. Fischer 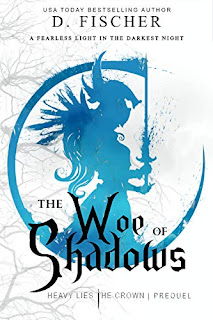 For the sake of her kingdom, one strong but young queen will risk everything she holds dear. She was fierce. She was strong. She was unstoppable. Until a god descended upon their land. The god warned Amala Ashcroft of approaching dark magic that would enslave her people, crush her reign, and defeat her own magic. To save all she holds dear, Amala must strike deals with dangerous enemies and swear blood oaths to powerful allies. But protection doesn’t come without harrowing sacrifices. Forced to keep grim secrets, her carefully laid plans begin to unravel in the face of the ultimate betrayal. Can Amala prevent the merciless evil from taking hold? Or will generations to come battle the same malicious war?
MY REVIEW:
WOW, WHAT A WONDERFUL START TO A NEW SERIES. I WAS PULLED INTO THE STORY FROM THE VERY BEGINNING UNTIL THE END.  THE AUTHOR HAS CREATED A UNIQUE STORY FILLED WITH MAGICAL CHARACTERS SOME BEAUTIFUL AND SOME SCARY. THE SHADOW KINGDOM IS A MAGICAL PLACE WHERE ANYTHING IS POSSIBLE.THE STORY IS FILLED WITH ACTION, SUSPENSE AND INTRIGUE WHICH WILL LEAVE YOU GUESSING WHAT WILL HAPPEN NEXT. THIS IS THE STORY OF THE SHADOW PEOPLE AND THEIR QUEEN AND THE FUTURE DANGER TO THEIR KINGDOM. THE QUEEN IS VERY STRONG AND POWERFUL AND WILL DO ANYTHING TO SAVE HER PEOPLE AND PROTECT HER DAUGHTER.   D. FISCHER HAS DESCRIBED THE BEAUTY OF THE SHADOW LAND REALLY WELL AND IT WAS LIKE THE READER WAS TRULY THERE.
I LOVE THE WOE OF SHADOWS AND I AM LOOKING FORWARD TO READING THE NEXT BOOK IN THE SERIES.  D. FISCHER'S WRITING IS VERY REAL AND BELIEVABLE AND HER DESCRIPTION OF PLACES AND PEOPLE ARE WONDERFUL AND PULL YOU INTO THE STORY.  THIS IS A MUST READ FOR ANYONE WHO LOVES A GREAT STORY.  YOU WILL BE PULLED IN JUST LIKE I WAS AND WON'T WANT TO PUT IT DOWN.  IT WILL LEAVE YOU WANTING MORE.  5 STARS 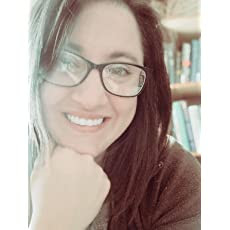 Biography USA Today bestselling and two-time Iowa award-winning author D. Fischer is a mother of two very busy boys, a wife to wonderful husband, and an owner of two sock-loving German Shorthair Pointers. They also have a cat named Geralt, but since Geralt adopted them and not the other way around, the cat is more of a tenant who occasionally purr-purrs for his rent, if he’s not too busy murdering nerf darts. Together, they live in Orange City, Iowa. When D. Fischer isn’t chasing after her children, she spends her time typing like a mad woman while consuming vast amounts of caffeine. Sometimes, if her husband can manage to remind her of the real world outside her office window, they hike! Known for the darker side of imagination, she enjoys freeing her creativity through worlds that don’t exist, no matter how much we wish they did. You can follow D. Fischer on Amazon, Bookbub, Instagram, TikTok, Facebook, or join her VIP Reader's Group on Facebook: D. Fischer Reader's Group - Creatures of Divinus Kingdom.
Posted by Girl with Pen at 6:00 AM